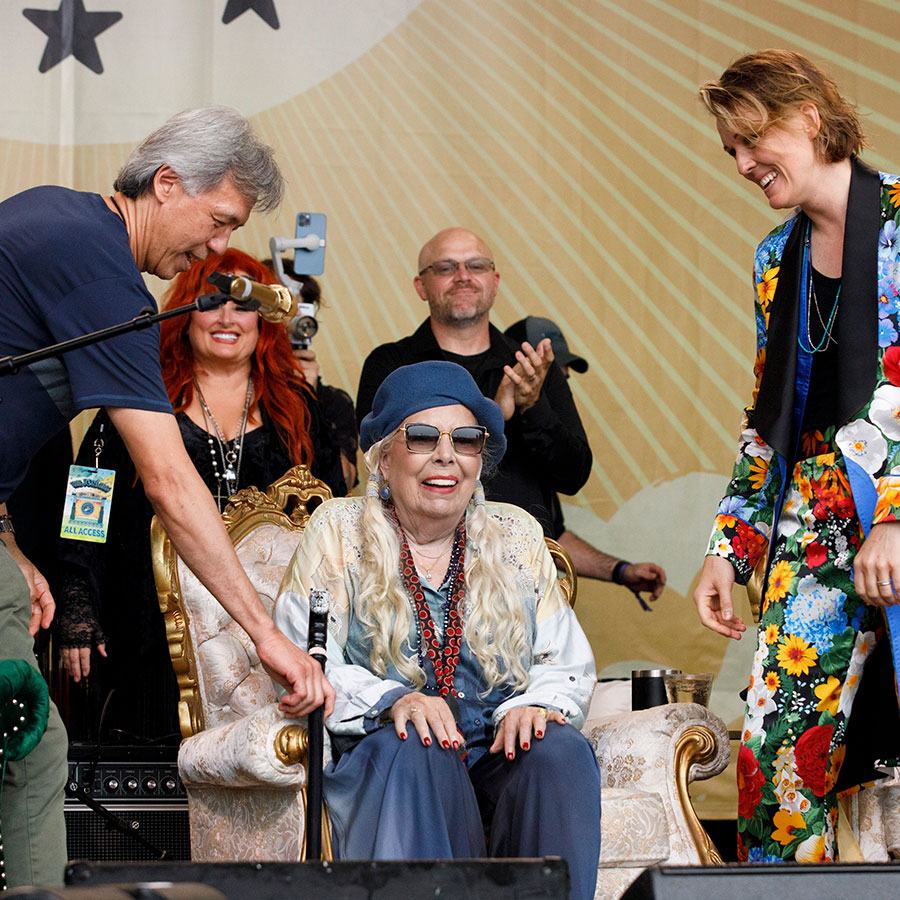 Brandi Carlile introduces Joni Mitchell for a special Joni Jam at the 2022 Newport Folk Festival at Fort Adams State Park on Sunday. Wynonna Judd (back left) and her Lucius bandmates as well as Mitchell's band were onstage for the surprise set, which was originally billed as Brandi Carlile and Friends. Photo: Carlin Stiehl for The Boston Globe via Getty Images

Canadian folk legend Joni Mitchell surprised festival goers on Sunday as she appeared live at the Newport Folk Festival for the first time since 1969.

Billed as Brandi Carlile and Friends, the surprise 13-song set saw her perform many of her classics, including “A Case of You,” “Both Sides Now” and “Big Yellow Taxi.”

The appearance marks the 78-year-old singer-songwriter’s first concert appearance since suffering a brain aneurysm in 2015, after which she was forced to learn to walk again. Mitchell’s last full live show was at the Wiltern in Los Angeles in 2002.

Joining Mitchell on stage along with Carlile — a close friend who has covered Mitchell’s classic album Blue in full — was Marcus Mumford, Wynonna Judd, Blake Mills, Jess Wolfe and Holly Laessig of the band Lucius, and Mitchell’s bandmates Phil and Tim Hanseroth and Celisse Henderson.

Flanked on either side by her fellow musicians, Mitchell — sporting a dark blue beret along with a matching pant ensemble, glittering beads and shades —  fittingly took her seat onstage in a gold, throne-like chair complete with a gold microphone.

“This scene shall be forever known henceforth as the Joni jam!” Carlile declared, referencing the epic jam sessions the folk icon has put on at her Los Angeles home in recent years as she worked towards a return to the stage. Attendees of the sessions have included fellow legends Elton John, Dolly Parton and Chaka Khan as well as pop star Harry Styles.

In April, Mitchell was honoured as MuiCares person of the year at a ceremony ahead of the Grammys, where she joined Carlile onstage to sing two of her hits “The Circle Game” and “Big Yellow Taxi.”

Sunday’s performance, however, saw her take the reins, performing a number of songs solo, including a rousing rendition of the George Gershwin classic “Summertime,” while another highlight saw her rise from her throne — without the cane that’s accompanied her on rare public appearances — to play an electric guitar solo during a performance of Court and Spark’s “Just Like This Train.”

Mitchell’s road to recovery hasn’t exactly been restful. She continues to work on a series of archival releases, which include previously unheard material and covers. Her first, Joni Mitchell Archives, Vol. 1: The Early Years (1963-1967), won a Grammy last year for Best Historical Album, beating out Prince’s Sign o’ the Times.

That same year she celebrated the 50th anniversary of her album Blue, which included the release of the first music video for one of the album’s classic tunes “River.”

Her efforts to reinvigorate some of her classics has paid off. Mitchell herself took note of a renewed appreciation for the 1971 album in a video posted to her Twitter.

“I’m so pleased with all of the positive attention that Blue is receiving these days. You know, when it was first released it fell heir to a lot of criticism. So 50 years later people finally get it [Laughs] and that pleases me. Thank you.”

Joni explained in a 2021 interview with filmmaker Cameron Crowe that the album originally “came out of the chute with a whimper.”

“I couldn’t tell what I had created,” she explained. “It was kind of like Dylan going electric. They were afraid. Is this contagious? Do we all have to get this honest now? That’s what the boys were telling me. ‘Save something of yourself, Joni. Nobody’s ever gonna cover these songs. They’re too personal.’”

Now, 50 years on from that influential album, Joni is once again proving herself timeless.

It’s a fact best demonstrated by an exchange on Twitter between a seasoned Joni follower and a young festival goer, who said Joni’s performance “changed his life.”

The long-time fan commented, “55 years ago she changed all of ours, welcome to the club!”

“Still Rockin’ in the Free World”: How Neil Young and Joni Mitchell’s Spotify Boycott Embodies the Spirit of the ’60s