‘Not Just a Girl’: 5 Things to Look for in the New Shania Twain Netflix Documentary 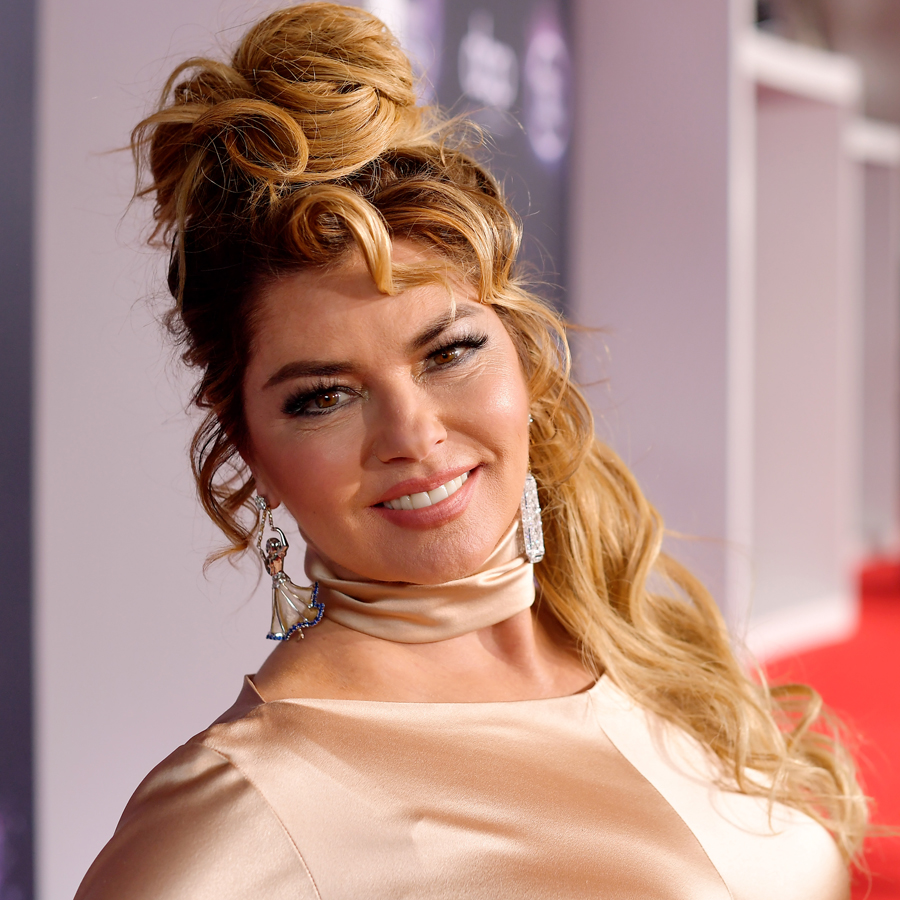 Shania Twain, pictured here in 2019, is the subject of a new Netflix documentary, 'Not Just a Girl', which drops on Tuesday. On the same day, she's releasing a compilation album 'Not Just a Girl: The Highlights.' Photo: Matt Winkelmeyer/Getty Images for dcp

Queen of Country Pop Shania Twain is back in the news thanks to a new career-spanning documentary Not Just a Girl, which premieres Tuesday (July 26) exclusively on Netflix. The 56-year-old Canadian superstar’s new compilation album Not Just a Girl: The Highlights also releases on the same day and next month, Twain is scheduled to both hit the stage on the closing night of the Boots & Hearts Festival (Aug. 7 in Toronto) and receive the ACM Poet’s Award — given to a country music songwriter for outstanding and longstanding musical and/or lyrical contributions throughout their career (Aug. 24 in Nashville).

Perhaps, then, we’re on the cusp of a Shaniassance? Lately, Twain has been sporting a baseball cap emblazoned with the word “ICON.” The opening strains and rallying cry “Let’s Go, Girls!” from her anthem “Man! I Feel Like a Woman” became sensation with TikTok users (from roller derby queens to drag queens) — especially after a sleepy Twain playfully shared a clip of herself starting the day to it.

Between sharing anecdotes and chats with famous friends on her Apple Music podcast Home Now Radio and a duet of “You’re Still the One” with Harry Styles at Coachella in April (with Styles also doing backup vocals for “Man! I Feel Like a Woman”), this is a superstar who’s always been as deft at promotional strategy as she is singing and songwriting. (The new documentary itself is produced by Mercury Studios, the content creation arm of Twain’s label at Universal Music Group).

Twain, remember, consciously and deliberately disrupted the conventions of the country genre before writing hit after hit and earning global pop music fame. A decade ago, Twain wrote her autobiography From This Moment On, and starred in the autobiographical docuseries Why Not?, with sister Carrie Ann on Oprah’s OWN network. It illustrated her oft-told humble origin story — raised in the northern mining town of Timmins, Ont., as one of five children in a poor home, and amid domestic violence, and talked about her childhood of performing at local bars after last call and then raising her younger siblings after the loss of their parents.

But what else can we hope to learn about Twain in Not Just a Girl?

Will It Get Personal — and Discuss Her New Voice?

As the trailer promises, the 98-minute documentary opens with Twain driving herself through the winding Swiss hillside in an art-covered canary-yellow convertible to what is presumably her Lake Geneva home. “I believe every leader of their own destiny is fearless,” the entertainment superstar’s narrative voice-over explains in an introspective tone about wanting to make her own way in the world. That suggests that Not Just a Girl will be a chatty and intimate take on her story — with a casual Twain offering insight while sitting cross-legged and barefoot and taking us into at least one of her sprawling homes in Switzerland, the Bahamas, or Northern Ontario — and peppered with personal home movie footage and archival clips.

Anyone listening in the last few years has also noticed that Twain’s speaking voice is raspier, after experiencing dysphonia from contracting Lyme disease with a 2003 infected tick bite that affected her ability to sing (surgery was performed to improve her vocal cord function). Twain’s original singing and speaking voice is forever altered and we hope she brings fans up to date on what that means to her creative expression as an artist and songwriter.

As well, expect her to dig into the making of her eponymous 1993 first album in Nashville and candidly discuss how being a female artist with a female manager (longtime friend and country music singer Mary Bailey) meant the industry didn’t take them all that seriously. But also, with the benefit of nearly 30 years of hindsight, we expect a balanced look back on her legacy in popular culture, paving a genre-defying trail not only for women in country but subsequent generations of musicians everywhere.

Will She Open Up More About *That* Break-Up?

Theirs was a split that made as many headlines as Tom and Nicole: early in her career, Twain met Robert “Mutt” Lange, legendary (and notoriously private) producer of AC/DC, Def Leppard, and Bryan Adams. They had a phenomenal musical, creative, and personal partnership: as Twain fully expressed herself in her songwriting, together they co-wrote and recorded her second (and breakthrough) 1995 album The Woman in Me and were engaged and married — all within six months. A star was born and accolades like Grammys, Junos and diamond album sales followed.

A quick recap: their fourteen-year relationship fell apart and the couple officially divorced in 2010 after Lange’s alleged affair with Twain’s assistant and closest friend Marie-Anne Thiébaud. (Twain has since been happily remarried to Thiébaud’s ex-husband Frédéric Thiébaud.) But that’s already been covered — up to a point — by her 2011 autobiography From This Moment On and a candid sit-down with Oprah Winfrey. With time comes perspective and what’s new and refreshing today is that Not Just a Girl will likely reveal a woman at ease discussing her impressive legacy — and that includes going beyond the raw hurt and revisiting the influential creative partnership experience that’s a part of her personal history, for better or for worse.

Will We Get a Detailed Look at Her Creative Process?

A slew of entertainers from fellow Canadian Avril Lavigne to Lionel Richie, Diplo, Taylor Swift, Kelsea Ballerini, fashion designer Marc Bouwer (Twain’s longtime costume maestro) and Bo Derek (whose late husband John Derek directed two early Twain music videos) feature in Not Just a Girl. Hopefully they’ll revisit the canny and groundbreaking sense of visuals in her work (both in her indelible styling of persona — sequins, midriffs, and short-shorts — and music videos) as well as the lasting feminist influence of Twain’s body confidence (particularly in then-conservative country industry) and glitzy on-stage image, which has also been embraced by the LGBTQ+ community.

Twain is clearly feeling good in her own skin, including when recounting the challenges of her life (her parents’ 1987 death in a car accident that left her responsible for her younger brothers, or the abrupt end of her first marriage) in a matter-of-fact fashion.

We’d like more granular insight, however, into the making of Twain’s blockbuster follow-up Come on Over (1997), her crossover into pop global superstardom and forever-fame. It not only sold 40 million copies to become the bestselling country album of all time, but also one of the bestselling albums by a female artist ever. The ensuing global tours were epic, in the vein of Metallica’s “big-ass rock shows” with pyrotechnics and ever-more-daring set-pieces (from her entrance on a horse to the flying motorcycle that recalls her techno-stylish “I’m Gonna Getcha Good” video — at the time the most expensive music video ever made).

We’re also promised personal insight from some of Twain’s inner circle, like her onetime manager Jon Landau, now 75, the impresario better known as Bruce Springsteen’s star-making manager and producer. Watch, too, for firsthand insight, personal photographs, home movies, and behind-the-scenes footage of Twain and Lange’s collaborative process and chemistry — including audio of an unheard early demo recording of “From this Moment On” with Lange doing backup vocals.

Will We Meet Her Son, Eja Lange?

Probably not. Eja D’Angelo Lange, Twain’s only child with ex-husband Lange, was born in 2001 (he turns 21 in August) and his recent purchase of a home in Los Angeles made the tabloids. Aside from occasional throwback photos or mention of his burgeoning interest in pursuing a music career, however, Twain has admirably always guarded her son’s privacy. Her sporadic but increasing social media presence affords glimpses of her life now at both work and play with Thiébaud — and in the documentary referring to how she likes to get out on the water of Lake Geneva with her dog and guitar, “to chill and contemplate.” We see her backstage with famous friends like John Legend or chats with Taylor Swift. But personal life as it relates to non-famous family — be it the reportedly strained relationship with the younger siblings she helped raise or the life of her now-adult son — will likely remain private.

Will We Hear New Material?

The documentary shows Twain working on new songs in a London recording studio, and we know there are more phases to her Las Vegas residency in Planet Hollywood’s Zappos Theatre, including a final stint this fall. Whatever happens with the Not Just a Girl: The Highlights, after her third successive diamond-certified album Up (2002), Twain’s groundbreaking success is still impressive by any metric: 100 million albums sold worldwide.

“Record sales—not streaming,” as Lionel Ritchie underscores. Her lengthy entry in the history books is undisputed.

“It’s Quite Shocking, Really”: Kate Bush On How Stranger Things Revived Her Hit “Running Up That Hill”