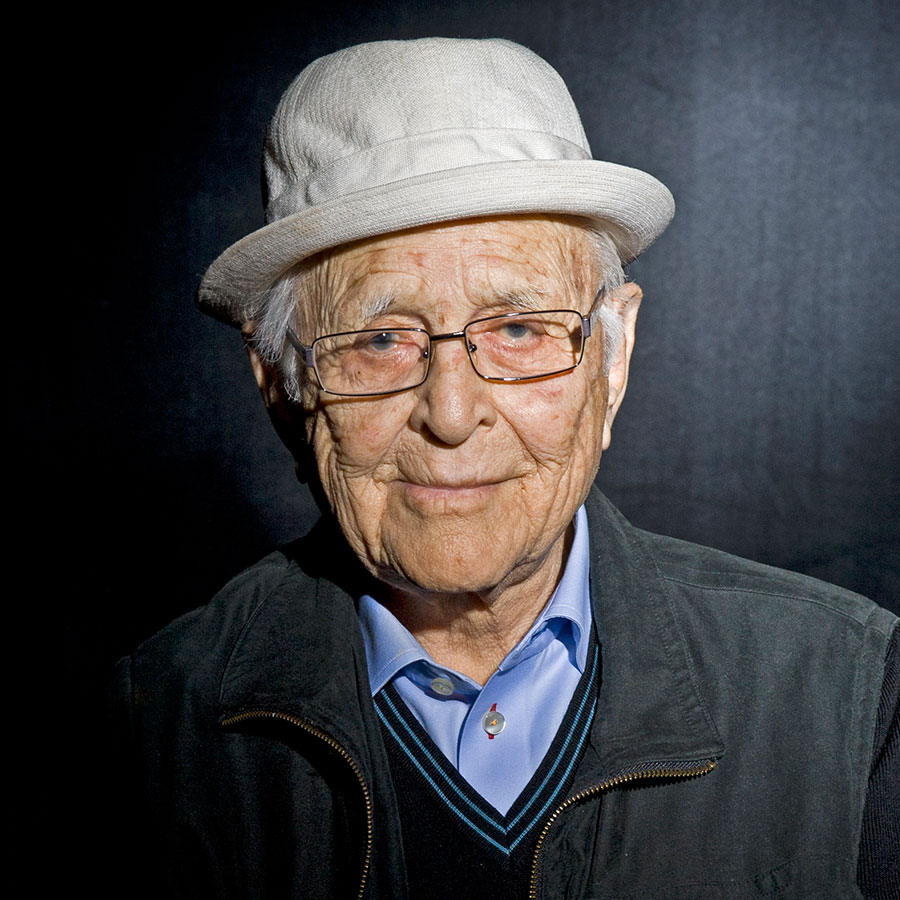 Norman Lear — seen here in 2017 — still has his sights set on breaking barriers in the television industry as he turns 100 on Wednesday. Photo: Timothy Hiatt/Getty Images for Ebertfest

Hollywood icon Norman Lear turns 100 on Wednesday, with more than 60 of those years spent shaping an indelible legacy in the entertainment industry.

A pioneer of a candid, socially-realistic genre of television programming and champion of democratic values, Lear’s strategy of using humour and laughter to cover challenging issues and spark conversations to create a more equitable society has had a lasting impact on politics as well as popular culture.

“The key learning curve in life,” Lear explains in his bestselling 2014 memoir Even This I Get to Experience, “is how one can grow horizontally by becoming informed in one field and then informed in many entirely new fields.

“But,” he adds, “that horizontal growth becomes less important as time goes on. The one that goes more important over time is the vertical journey — the journey into one’s self.”

As he hits the hundred-year milestone, Lear remains as active — and his legacy more relevant — than ever. For his centenary, Zoomer looks at five reasons we continue to admire Norman Lear.

All in the Family, One Day at a Time, Maude, Good Times, The Jeffersons, Sanford and Son, Mary Hartman, Mary Hartman, Different Strokes…the list goes on. Lear’s television success alone is extensive variously as producer, writer, or creator of more than a hundred TV series.

He had a front row seat for the birth of popular television broadcasting and, at one point, had nine of his own shows on the air at the same time. Late night host Jimmy Kimmel writes the foreword to Lear’s recent 50th anniversary book All in the Family: The Show that Changed Television. It’s an insider look that goes behind the scenes of his most polarizing and revolutionary sitcom about Archie Bunker, blue-collar bigot from Queens, that — as Zoomer has noted — upended prime time TV when it premiered in 1971 by directly addressing social topics of race and class. The book features interviews with cast and crew, plus Lear’s memories of certain episodes.

Regardless of the show, his approach was to create smart comedy that reflected the pressing political and social issues of the day alongside the timeless ones. You might call it The Norman Lear Effect. And that’s also the name of his official YouTube channel where, for the visionary’s 100th birthday, they have assembled a collection of Lear’s most controversial episodes and important themes, memorable and influential moments and clips that shine a spotlight on non-traditional families and issues of race, mental health, and women’s rights.

He Pushed Advocacy Into Entertainment — and Vice-Versa

In his lifetime the revered TV writer worked towards progressive causes such as Civil Rights and the Voting Rights Act and founded several cause-oriented national organizations, including the liberal advocacy group People for the American Way to counter the influence of the Christian right in politics (and for his centenary, the progressive organization is currently matching all donations until July 31). Lear’s name was on former American president Richard Nixon’s notorious enemies list and he counts both that fact and earning the distinction of being named the number one “enemy of the American family” by Jerry Falwell as a badge of pride.

To bring difficult but necessary conversations into North American living rooms — at their peak, in shows seen by more than 120 households per week — Lear’s weapons were laughter and humour. An outcrop of that is The Norman Lear Center, a nonpartisan research and public policy center that studies the social, political, economic, and cultural impact of entertainment on the world.

He’s A Patriot Bent On Reclaiming The Word

“In my ninety-plus years I’ve lived a multitude of lives,” Lear writes in his memoir Even This I Get to Experience, before enumerating a few highlights, which include: “a life as a political activist, in philanthropy, as a spiritual seeker, three lives as a husband, six as a father…and four as a grandfather.” Not to mention a life as a crew member in a B-17 bomber flying 52 missions over Europe during the Second World War. In the early 2000s, Lear mounted an extensive tour of the Declaration of Independence.

To kick off his 100th year last July, Lear took the opportunity not to celebrate his own accomplishments but to use them as the lens in an op-ed about the erosion of American voting rights in The Washington Post. He mentions that he’s a Second World War combat veteran who fought fascism in Europe when he declares, “I am a patriot, and I will not surrender that word to those who play to our worst impulses rather than our highest ideals.” (He’s referring to extremist white supremacist hate groups like the Patriot Front).

He Still Wants To Change The World

Outspoken and active on social media, Lear’s work is far from finished. Take the famous 1972 “Maude’s Dilemma” two-parter in which the sitcom’s eponymous 47-year-old feminist Maude (Bea Arthur) discovers she’s unexpectedly pregnant and debates whether or not to have an abortion. Airing two months prior to the landmark Roe v. Wade decision, as the first portrayal of a major character in prime time television to have an abortion, it was groundbreaking.

Lear’s late great contemporary Betty White, who died last year at the age of 99, always said that retirement was not in her vocabulary. It’s not in Lea’rs either. As Maude marks its 50th anniversary this fall in the wake of the U.S. Supreme Court’s stunning Roe v. Wade reversal, Lear recently said he’d like to recreate the episode for his “Live In Front of a Studio Audience” series.

“There is only one Bea Arthur, there will never be another,” Lear told Variety. But it’s exciting to imagine what somebody else will make of that character. It’s opening a new door and that’s exciting.”

A one-off Maude reboot would certainly be provocative, and highlight the unfortunately continued relevance of the original issue, more so even than when Lear and ABC restaged episodes from All in the Family and The Jeffersons for “Live” in 2019, with Woody Harrelson, Wanda Sykes, Jamie Foxx, and other contemporary actors in the iconic roles.

He Remains Vital And Relevant At Any Age

Lear counts five Emmys (and holds the record as the oldest Emmy winner ever, at age 97), the National Medal of Arts, and the Kennedy Center Honors among his many accolades, but the laurels aren’t a resting place. On the occasion of turning 100, Lear sat down with CNN host Dr. Sanjay Gupta for “Living to 100 and Beyond,” an extensive and offbeat episode of Gupta’s Chasing Life podcast.

“I like getting up in the morning with something on my mind, something I can work on,” he told the host. (The late Carl Reiner’s 2017 HBO documentary If You’re Not in the Obit, Eat Breakfast likewise touts that as a key to vitality and longevity in one’s 90s, with glimpses of the lifelong friendship between Lear, Mel Brooks, and Dick Van Dyke.)

Lamenting the lack of sitcoms for and about mature adults, for example, Lear recently told Variety that he’s still trying to find a home for Guess Who Died?, “a half-hour comedy about those who are 65-plus, living in a community and thriving.”

The recent Netflix reboot of Lear’s comedy series One Day at a Time with a Latino cast, however, opened another new door in his already-legendary career: an animated revival of Good Times is in the works at Netflix, and Lear and producing partner Brent Miller are overseeing the upcoming remake of Mary Hartman, Mary Hartman — starring Canadian Schitt’s Creek alum Emily Hampshire and Jacob Tierney and updating the setting and premise of the satirical sitcom to explore mental health in the social media age.

As the legend says in his memoir: “I go to sleep anticipating and delighting in the great taste of the coffee I will be drinking the next morning.”

Jimmy Kimmel Talks Recreating Norman Lear Classics With the Upcoming Live in Front of a Studio Audience: The Facts of Life and Diff’rent Strokes

All in the Family Turns 50: Celebrating the Timeless Legacy of the Pioneering Sitcom