Emancipation Day: Ngozi Paul Talks Art and the Fragility of Freedom Ahead of CBC Specials 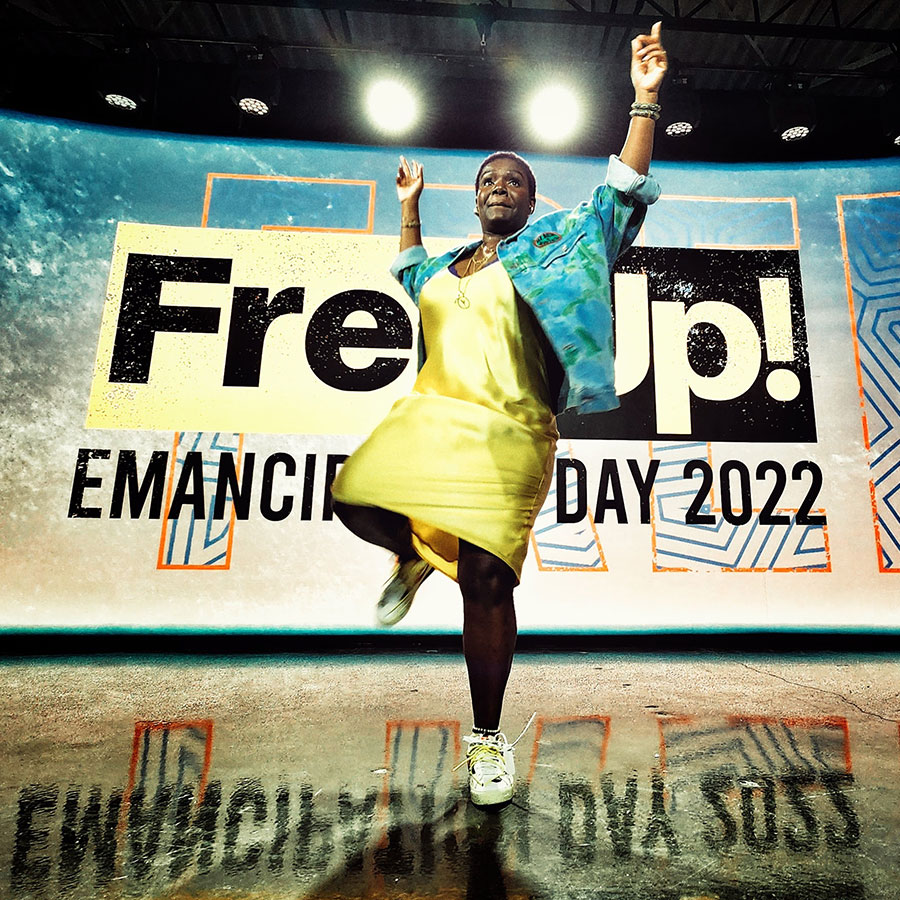 Canadian actress, writer and producer Ngozi Paul, seen here on the set of the FreeUp! Emancipation Day 2022 special, says that Black history "is just a part of history that should be acknowledged as part of the fullness and richness of our culture." Photo: Justin Lovell

Canadian history education contains numerous blind spots, many of which have to do with the treatment of BIPOC individuals by white settlers. An example of this is the commonly held myth that Canada never experienced slavery itself and, rather, served only as the beacon of freedom at the end of the Underground Railroad.

And while thousands of American slaves did escape to freedom in Canada via the Underground Railroad, our nation’s collective hands weren’t free of the stain of slavery. From the early 17th century until 1834, European colonists bought and sold Black slaves in Canada. The year 1834 — and August 1 of that year specifically — brought an end to slavery across the British Empire, including in Canada, with the passing of the Slavery Abolition Act. Thus, August 1 became known in Canada as Emancipation Day.

It took, however, another 187 years for the Canadian government to officially recognize August 1 as Emancipation Day. They finally did so last year, in 2021, noting on the government website that the occasion “celebrates the strength and perseverance of Black communities in Canada” and that “Canadians are invited to reflect, educate and engage in the ongoing fight against anti-Black racism and discrimination.”

Despite only being officially recognized last year, Toronto-born actress, director, writer and producer Ngozi Paul — whose career spans everything from the Stratford stage to the Sundance Film Festival, including co-creating and starring in the TV series Da Kink in My Hair — has helped to raise awareness about Emancipation Day for years.

Paul is the co-founder of the organization FreeUp!, which began as a Toronto open mic event in 2017 to help bring attention to Emancipation Day. But, as the organization’s website notes, it “has since grown into a platform featuring young change makers and brilliant Black, Indigenous and racialized artists performing music, poetry, theatrical monologues and dance, exploring the meaning of freedom.”

And this year, Paul and her studio, Emancipation Arts, have produced two hour-long Emancipation Day specials that will air back-to-back on CBC (and stream on CBC Gem) on August 1.

The first, FreeUp! Emancipation Day, visits various locales of Emancipation Day celebrations across Canada as well as historic-related landmarks like St. Lawrence Hall in Toronto, where the 1851 North American Convention of Coloured Freemen was held, and the Buxton National Historic Site, a settlement founded in part by freed American slaves that also served as a terminus for the Underground Railroad. Legendary Canadian jazz musician Joe Sealy, 82, will also be honoured during the broadcast.

Brueggergosman, 45, an award-winning Canadian soprano and descendant of Black loyalists, says in the special that, despite the celebration of Emancipation Day, that same freedom can also be revoked if Canadians don’t remain alert and aware.

“Your emancipation is not guaranteed,” she explains. “It’s something that must be fought for, appreciated, never taken for granted. And I don’t think it’s emancipation if you don’t give it to your children’s children. So for me, emancipation is legacy.”

Ahead of the FreeUp! specials airing on CBC, Ngozi Paul spoke with Zoomer via email about Emancipation Day, the ongoing fight for freedom and why art plays a central role within that process.

NGOZI PAUL: When I step back and reflect on it, I am definitely thrilled. Last year, the House of Commons voted unanimously in support of recognizing Emancipation Day (*it’s not yet law). It’s such an honour to contribute and continue highlighting the significance of Emancipation Day, building on the foundations laid by dauntless advocates like Rosemary Sadlier, the namesake of our annual Freedom Award.

Going forward, I would like Emancipation Day to be designated as an official federal holiday. It’s truly a unique opportunity for us to celebrate freedom together, explore its meaning, and to cultivate civic engagement. We can do this with awareness of past triumphs informing our eye on the horizon now, inspiring where we want to go in this moment. I think we need as many people as possible to thoughtfully engage with the challenges we face.

MC: These specials you helped produce for CBC offer a beautiful discussion and exploration of freedom. What do you feel are some of the biggest misconceptions related to the history of Black communities in Canada that need to be addressed when highlighting a commemoration like Emancipation Day?

NP: The Emancipation Arts team is proud to have produced these special programs for the CBC this year, myself along with FreeUp! Vibes-in-Chief L’Oqenz and Emancipation Arts’ producer Sara Schwartz Geller. It really does take a village to pull something like this together.

One of the biggest misconceptions is that Canada has always been a safe haven where persecuted people escaped to, yet that certainly was not always the case. I think one of the issues with Black history in Canada is that it is treated as different somehow, when it is just a part of history that should be acknowledged as part of the fullness and richness of our culture.

NP: Our mission with this project is to inspire an annual renewal of celebrating freedom in new ways. In that sense, each year provides a fresh opportunity to remember the past of Emancipation Day, but even more important is the focus on the current moment of freedom, because we do not dwell in the past but in the now.

MC: The specials also feature some incredibly moving music centred on the themes of emancipation and freedom. Why was it important to you to include the musical element alongside the discussion?

NP: Art moves us, but music especially is the art form where we see people truly moving! I love the idea that, each Emancipation Day, there will be songs of freedom sticking with the audience weeks and months after they hear them, keeping freedom in their thoughts in a way that probably wouldn’t happen otherwise. While working on the special, I know that I was humming all of the songs day and night, TiKA’s chorus “I’m free” especially.

MC: The specials also feature people of varying backgrounds and experiences, including from Iraq, Venezuela, or those with Indigenous and Jewish heritage. It really expands on the idea of emancipation and freedom being a communal goal. So as people across Canada watch this film on Emancipation Day, what do you hope they take away from it?

NP: We want to open hearts and minds, which I think is one of the beauties of art, but more specifically, I believe FreeUp! is an opportunity to recognize that freedom is both absolutely essential and unavoidably fragile.

I feel that we’re living in a time of polarisation, without understanding, and I see art and expression as a conduit that can bring us together on common ground, so we can protect the things that matter most to all of us.

In working on the show, I was reintroduced to our Charter of Rights and Freedoms. Our Charter describes core principles in respecting human dignity and keeping us unhindered to create solutions for life’s inevitable challenges. I see FreeUp! as an opportunity to cultivate these freedoms and exercise them to make real the good things in our hearts.

“Fragments of Epic Memory”: Exploring the Dichotomy Between Colonialism and Caribbean Culture Through Art