A League of Their Own: As the New TV Series Debuts, Exploring the History of Women’s Wartime Baseball 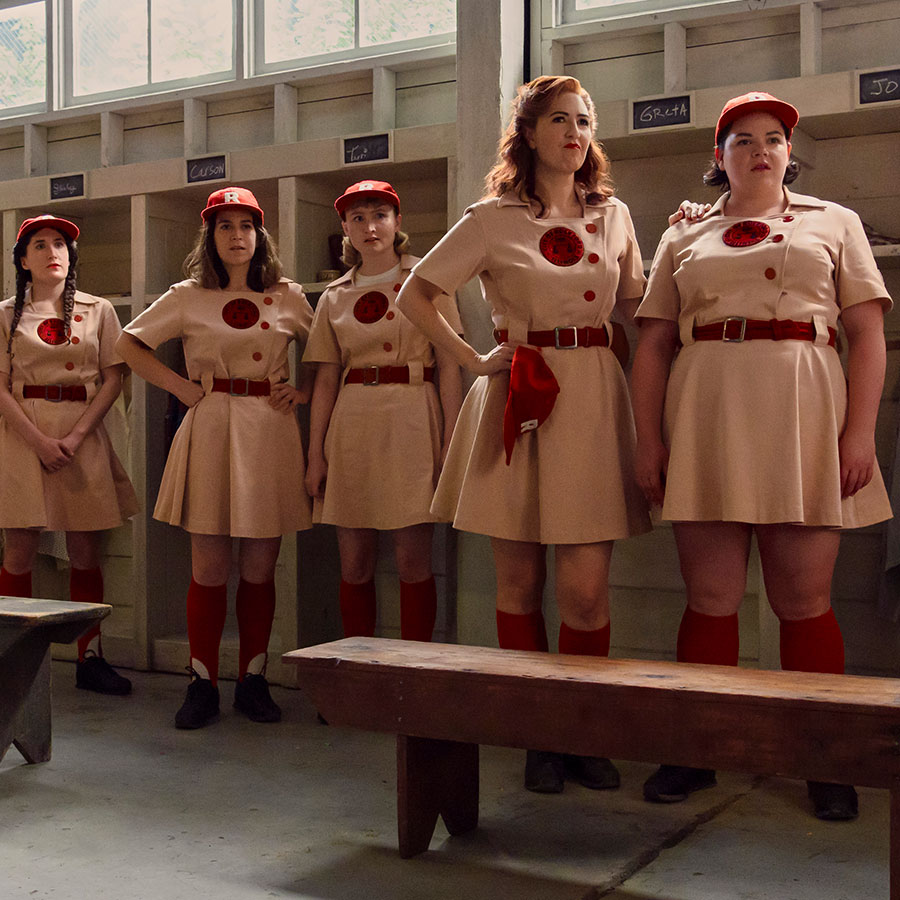 The Rockford Peaches — (l-r) Kate Berlant (as Shirley), series co-creator and executive producer Abbi Jacobson (as Carson; and Co-Creator and Executive Producer), Molly Ephraim (as Maybelle), D'Arcy Carden (as Greta) and Melanie Field (as Jo) — in 'A League of Their Own.' Photo: Courtesy of Prime Video

Inspired by Second World War-era history — and a beloved 1990s film — a new series about female baseball players is on deck. The eight-episode drama A League of Their Own is a pitch-perfect and intensely physical exploration of talent, ambition, race, sexuality, competitiveness, camaraderie, loyalty and friendship.

As the name suggests, the Prime Video series, which premieres Aug. 12, revisits the premise of director Penny Marshall’s now-classic 1992 sports movie A League of Their Own, which broke ground as the first big movie about women as ambitious athletes rather than the helpmeets. The star-studded film — the cast included Geena Davis, Madonna, Rosie O’Donnell and Tom Hanks — shed light on the forgotten women of ’40s pro baseball and paved the way for other female-driven sports films and shows like Bend It Like Beckham, Blue Crush, Battle of the Sexes, Glow, and Cheer.

Like its big screen counterpart, the new League is the fictionalized story about some of the women who joined the All-American Girls Professional Baseball League (AAGPBL), which operated from 1943 to 1954. At the time, club owners worried that the Second World War might cancel the 1943 Major League Baseball season as young male players and stars like Joe DiMaggio enlisted in the army.

Just as they filled the void left by drafted men in factories and other jobs, talented women were recruited to teams and formed a league in order to keep the country’s national pastime alive. Both the movie and now the series follow the fortunes of the Rockford Peaches, a scrappy team in the AAGPBL. Many of the characters were composites based on historic players.

Women faced with expansive new opportunities and experiences, following their dreams and figuring out who they are mean that finding one’s team — literally and metaphorically — is a prominent theme in the new series. The series also adds a more inclusive, historically representative spin to that premise than the underdog classic did.

The original movie does a good job conveying the sexist attitudes women of the era experienced, but there was always more to the story. Co-created by Abbi Jacobson (Broad City) and Will Graham, the series widens the lens beyond that of the AAGPBL to include the Black leagues of the era, for example, to more authentically depict the baseball experience of an entire generation of women (not just the cis white ones permitted to try out for the women’s league).

Back when it was first announced, Jacobson told The Hollywood Reporter that the new version, “is very much about inclusion of women in professional baseball, but it’s also about the inclusion of white women and white-passing women in professional baseball … This is a big American story that also very much happens to be about queer women and Black women. It’ll be exciting for folks to get a window into what these women’s lives were like.”

An episodic format allows space to flesh out characters, expand on context and delve into issues Marshall barely touched in the original movie. This time, Jacobson says, they looked to history first. “The movie doesn’t need to be remade,” she told UPI in a recent interview. “If we’re going to embark upon this project, it’s going to be about the stories that were not able to be told, that Penny Marshall couldn’t tell in 1992 or just the ones that weren’t focused on.”

The one fleeting intersectional moment in the film version of A League of Their Own has now rightfully become iconic: in the wordless, barely fifteen-second scene, a Black woman spectator (a longtime casting mystery who has since been identified as real-life softball legend DeLisa Chinn-Tyler) seated in the stadium’s “coloured” section silently throws a ball back to the players. Her pitch is impressive and she and Davis silently nod at one another — a tacit acknowledgement of the injustice of segregation in the sport (and society).

The original was faithful to the real, albeit narrow, slice of history it covered — the AAGPBL was segregated at the time. The colour barrier also excluded Black men from organized baseball, which remained segregated until 1947 when Jackie Robinson broke the colour barrier.

Interviewed for the movie’s 25th anniversary, screenwriter Lowell Ganz weighed in: “It did bother us that in order to be historically accurate [about the AAGPBL], we could not have a diverse cast,” he admitted to BuzzFeed. “We came upon that scene as a way to make the point … A lot of people have commented on it over the years, and I’m very glad we included it in the film.

The new series amplifies the injustice of the era’s racial divide with major characters like Max (Chanté Adams), a talented Black pitcher inspired by Toni Stone, Mamie Johnson and Connie Morgan, three historic athletic figures who played in the Negro Leagues with men. (Stone was the very first and her name is now immortalized in a 2019 play based on the book of her life, Curveball.) The 2020 biography of longtime Cuban American AAGPBL player Isabel ‘Lefty’ Alvarez also offered inspiration in expanding the roster of representation.

A CanCon note: although Canadian actor Kelly McCormack has the role of an American player named Jess McCready, she recently pointed out that the AAGPBL also scouted female players from Canada — the sister act featured in the very documentary that first inspired Marshall. As the story goes, after seeing the short 1987 documentary (also called A League of Their Own) about Vancouver-raised sister players Helen and Margaret Callaghan, Marshall was intrigued that as an avid baseball fan even she had never heard of the All-American Girls Professional Baseball League.

Marshall, who died in 2018, is recognized as a queer ally (and something of a lesbian icon) and her beloved ensemble movie is an iconic gay moment in pop culture — but it’s not explicitly reflective of an important historical reality among the players: the fact that queer women were drawn to the sport. Rosie O’Donnell, who played tough and arguably queer-coded third baseman Doris in the original, appears in the new series in a different, small role as the owner of the local gay bar. It’s just one of the explicit explorations of sexual identity because, as the show’s creators told the New York Times in a recent interview, that aspect needed to be more overt.

Co-creator Jacobson also stars as Rockford Peaches catcher Carson Shaw, an Iowa housewife who’s torn between the era’s traditional expectations of a wife keeping house or following her ambition and desire (including exploring relationships with other women). The show’s official social media accounts also highlight the facts behind the fiction, including the history of queer athletes who inspired a character on the new series. Catcher Terry Donahue, for example, met her partner Pat Henschel while playing in the AAGPBL but had to keep the relationship secret; she came out later in life and their 72-year relationship was the focus of poignant recent documentary A Secret Love (now on Netflix).

What the creators didn’t plan for is the serendipity of real-life AAGBPL player and series consultant Maybelle Blair’s spontaneous decision to come out publicly, at the age of 95, during a panel at June’s Tribeca Film Festival.

“I hid for 75, 85 years, and this is actually basically the first time I’ve ever come out,” the former baseball star blurted out to a stunned audience (the moment was captured on Instagram).

Hiding her sexual orientation was hard in that period but necessary, Blair said in a recent interview with MLB.com, “because we’d be either fired from our jobs or we would be discharged from service. It was just things that we just couldn’t do. We couldn’t live our lives.”

More than 500 women played in the League but initially, they were seen as an entertainment novelty — popular touring softball teams of the era had names like Barney Ross’ Adorables and Slapsie Maxie’s Curvaceous Cuties. In the original movie, the players wear mini-skirt uniforms and attend charm school for beauty and etiquette lessons, but want to be taken seriously as athletes rather than ogled as pin-ups. The League’s 75th anniversary was marked with tie-ins like a lipstick shade, because in real life the players really were required to attend the Helena Rubinstein Beauty Salon for makeovers and, yes, wear lipstick on the field.

The League finally received recognition from the shrine to America’s pastime in Cooperstown in 1988, when the permanent exhibition “Women in Baseball” included their history in the National Baseball Hall of Fame; since then another exhibition called “Diamond Dreams” has expanded on the story.

Not that the sexism and gender-based professional discrimination experienced by women in baseball or sports in general is a thing of the past. It was only last year that Kim Ng made history as the first woman to become a Major League general manager (of the Florida Marlins) after being passed over for the top job nearly a dozen times.

And while the women of the AAGPBL earned US$75/week (the equivalent of about $1,200 today, at the time more than twice what they could earn doing well-paid women’s work), the woeful gender pay gap in professional sports persists on every level — from prize purses to endorsement deals as well as with paltry minimum salaries compared to their male counterparts. Women make up 40 per cent of sportspeople — however, as of 2020 they continue to only receive four per cent of the total sports media coverage in print and broadcast (even during key events like the Olympics).

It’s in every sport: Taylor Jenkins Reid’s upcoming novel Carrie Soto is Back, out Aug. 30, goes inside the sexist perceptions and double standards of 1980s women’s pro tennis. In basketball, look no further than Brittney Griner’s detainment and conviction in Russia to highlight the continued disparity. Even WNBA champions like Griner, a two-time Olympic gold medalist and eight-time All-Star, must travel overseas for salaries with international leagues that are a financial lifeline worth multiple times their regular pay at home.

Meanwhile, 16-year-old St. John’s player Jaida Lee made history at the Canada Summer Games this month, as the first woman to play in the male baseball competition since it began in 1967. And encouraging that next generation is the reason nonagenarian AAGPBL player Maybelle Blair is still tirelessly campaigning to attract and retain girls and women in baseball.

Female sportsmanship drop out is an issue in Canada as well, with the federal government this week pledging $2 million to Canadian Women and Sport to encourage participation. It’s timely, because these inroads have consequences beyond the baseball diamond. According to CWS, studies have shown that “inclusive sport is a powerful vehicle for advancing women’s rights and opportunities.”

A League of Their Own debuts on Prime Video Friday Aug. 12.