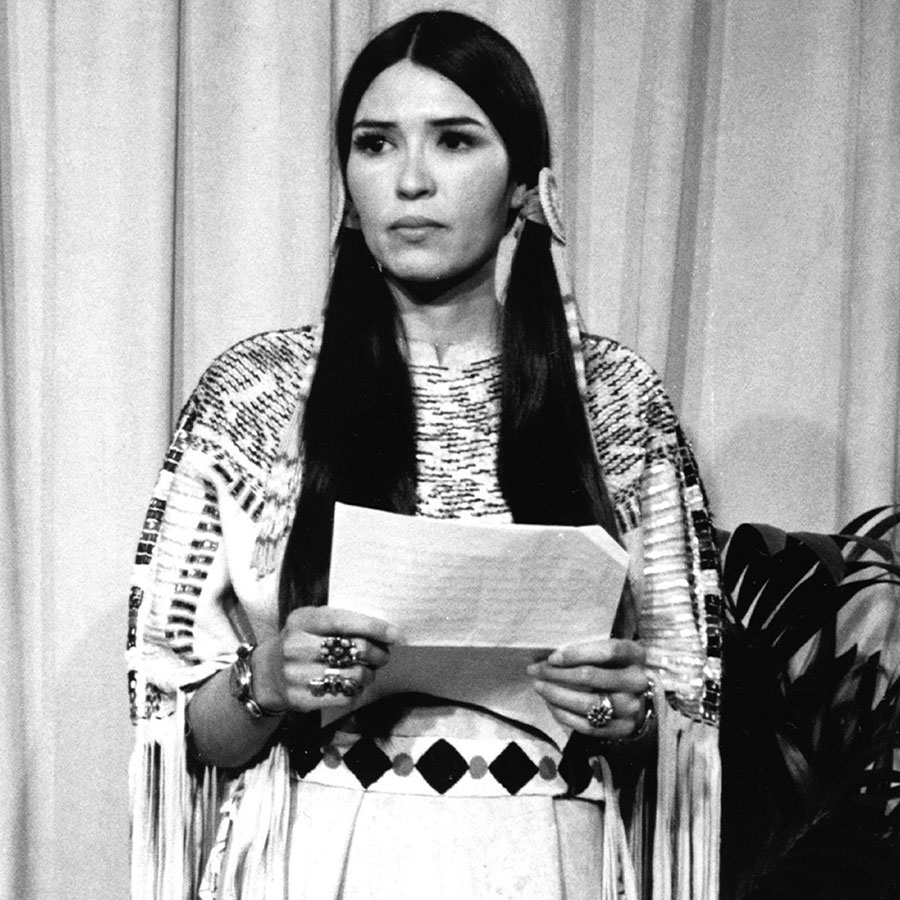 Sacheen Littlefeather reads Marlon Brando's refusal of his Best Actor Oscar for 'The Godfather' at the Academy Awards in 1973. Forty-nine years later, the Academy has apologized for the abuse Littlefeather suffered following the incident, adding, "For too long the courage you showed has been unacknowledged." Photo: Everett Collection/Getty Images

Nearly 50 years after finding herself at the heart of one of the most unexpected and controversial Oscar moments in history, Sacheen Littlefeather, now 75, is finally receiving vindication and an apology.

The Academy of Motion Picture Arts and Sciences, which runs the Oscars, formally apologized Monday for “the abuse you endured” — adding it was “unwarranted and unjustified” — following her appearance at the 45th Academy Awards in 1973.

That year, actor Marlon Brando was nominated for the Best Actor Oscar for his portrayal of mob boss Vito Corleone in The Godfather, but announced a boycott of the Academy Awards out of protest over the treatment of Indigenous Americans in both Hollywood and at Wounded Knee — the occupation protest in South Dakota occurring at the time during which hundreds of Indigenous protesters demanded that the American government honour historical treaties.

Brando instead asked Littlefeather — actress, activist and then-president of the National Native American Affirmative Image Committee — to appear on his behalf. And when Brando won the Oscar, Littlefeather famously took the stage, refused the award from presenter Roger Moore and delivered a speech in which she noted, “the reasons for this being are the treatment of American Indians today by the film industry … and on television in movie reruns, and also with recent happenings at Wounded Knee. I beg at this time that I have not intruded upon this evening, and that we will in the future, our hearts and our understandings will meet with love and generosity. Thank you on behalf of Marlon Brando.”

The fallout from the speech was swift, both from the disapproving members of the Oscars audience, who made their feelings known loudly in the moment, and from some of the Hollywood stars in attendance.

In an interview with The Guardian last year, Littlefeather recalled seeing John Wayne standing in the wings of the Oscars stage and that, “he was coming towards me to forcibly take me off the stage, and he had to be restrained by six security men to prevent him from doing so.” She recalled in the same article that, backstage, “there were people making stereotypical Native American war cries at her and miming chopping with a tomahawk” and, following the Oscars, how she was blacklisted in Hollywood.

An Apology Five Decades in the Making

Monday’s apology came courtesy of a letter the Academy sent to Littlefeather in June, written by then-AMPAS President David Rubin. Rubin wrote that Littlefeather, “made a powerful statement that continues to remind us of the necessity of respect and the importance of human dignity” with her speech representing Brando at the Oscars in 1973.

“The abuse you endured because of this statement was unwarranted and unjustified,” the letter continued. “The emotional burden you have lived through and the cost to your own career in our industry are irreparable. For too long the courage you showed has been unacknowledged. For this, we offer both our deepest apologies and our sincere admiration.”

Rubin added that, “We cannot realize the Academy’s mission to ‘inspire imagination and connect the world through cinema’ without a commitment to facilitating the broadest representation and inclusion reflective of our diverse global population.”

Along with the apology, the Academy Museum of Motion Pictures announced that Littlefeather would attend “a very special program of conversation, reflection, healing, and celebration” at the museum in Los Angeles in September.

Littlefeather, who announced in the Guardian interview last year that she’s battling terminal cancer, noted in a statement that, “This is a dream come true. It is profoundly heartening to see how much has changed since I did not accept the Academy Award 50 years ago.”

She added, “Regarding the Academy’s apology to me, we Indians are very patient people — it’s only been 50 years! We need to keep our sense of humour about this at all times. It’s our method of survival.”