Bake and Make Up: New Series Serves Up Rekindled Relationships With a Side of Sweets 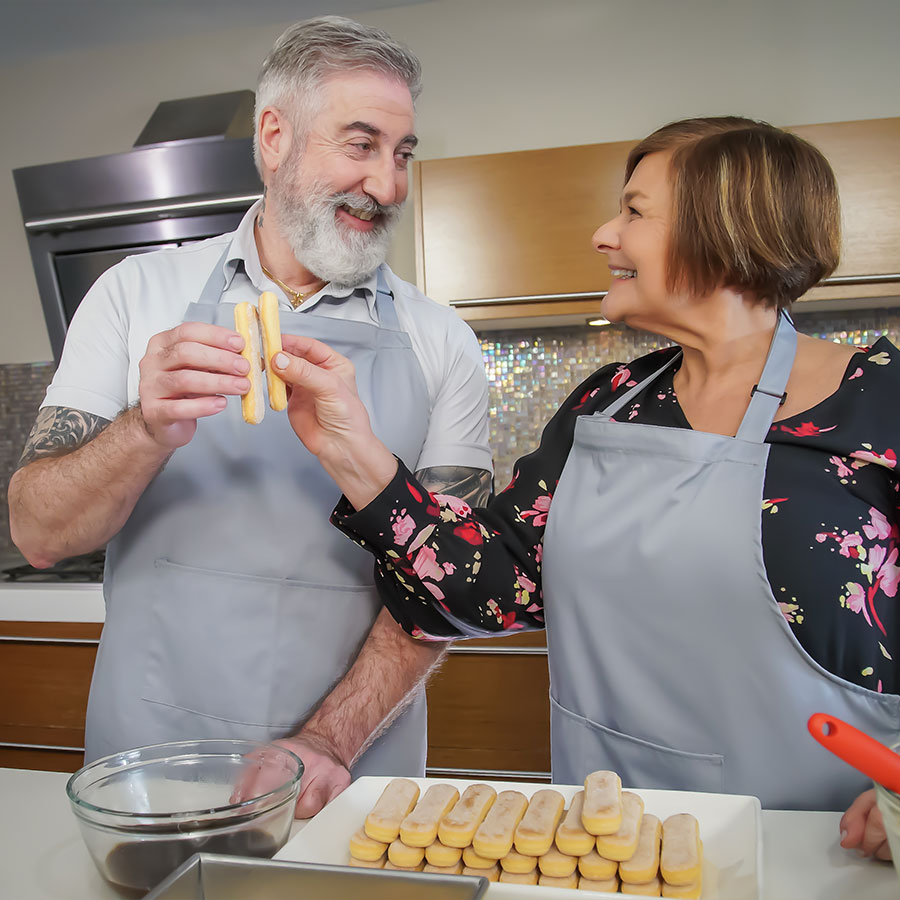 Gino, 63 and Paula, 61, reunited on 'Bake and Make Up' after meeting online years ago but opting not to pursue a romantic relationship. Photo: Courtesy Go Button Media/VisionTV

When Martha Brooks met Lisa Glover, the girls became inseparable besties and cooked up a lot of fun as school kids in Burlington, Ont. But that was more than 40 years ago, and the two drifted apart soon after Martha moved away.

When Martha met Lisa again a few months ago, after not seeing each other in years, they not only cooked up a lot of fun — they also baked cookies.

Martha and Lisa, both 57-years old now, were invited to reconnect on camera on Bake and Make Up, a clever mash-up of TV reality shows and cooking shows that debuts on VisionTV (a ZoomerMedia property) on Monday, Aug. 29. Martha and Lisa — along with their raspberry ribbon cookies — are the stars of the first episode.

The episode that follows, features Gino, 63 and Paula, 61. They met online some years ago but decided against a romantic relationship — “the chemistry, timing just didn’t mesh,” says Gino — but remained friends until they lost touch. They reconnect on the show and reminisce while making tiramisu.

In fact, in every episode of the series, there’s the wistful conversation about why and how the relationship between two people — be they family or former friends or romantic partners — faded away, as well as the memories of good feelings and fun and the pleasure in rekindling the relationship.

“We were looking for people who genuinely wanted to reconnect with someone in their life,” explains executive producer Natasha Ryan. “We kept them apart until we started filming. So when they walk into the kitchen and you see their faces light up when they see each other, that’s genuine.”

Baking together, meanwhile, gave the subjects something to focus on besides the emotion of finding each other again.

“People are much better speaking about things that are hard for them when doing something else at the same time,” says Ryan. “Rebuilding that rapport in the kitchen made it easier for them to be open with each other.”

One of her favourite things about the show, she adds, is that “people are pouring their hearts out and we’ve got the blender going.”

Lisa and Martha, for example, drifted apart when Martha’s family moved away to Toronto and the girls found new friends at their high schools.

Then, “life got pretty busy with work and being a mother,” explains Martha who describes herself as the calmer one. “Lisa’s a character. She grabs life harder.”

It was Lisa who responded to the call out for people to come on the show and meet with someone they were close to in the past and wanted to meet up with again.

“Lisa always sets things up and does all the organizing,” Martha adds.

“I am the wild one between the two of us,” acknowledges Lisa. “Martha and I grew up together but then life got in the way. Or maybe we didn’t try hard enough. But she never left my thoughts.”

When they met for the first time again in the Bake and Make Up kitchen, says Lisa, “there was no awkwardness. We fell right into the Martha and Lisa routine.”

With family grown and careers established — Martha is a bookkeeper and Lisa works as a border services officer at the Peace Bridge — there was time again to nurture the friendship and rediscover childhood joy.

Recently, they went treetop trekking together “because we used to climb trees together,” says Lisa. They also went to the recent Blue Rodeo concert at Toronto’s Budweiser Stage.

Ryan and her team have delighted in bringing people together who had been separated for some time, and in sharing the positive emotions of reconnecting. Guests in the series range from their early 40s to mid-70s.

“We have a great range of stories,” Ryan says. “We have a set of sisters with a lot of buried emotions, frustrations and buried truth. They were best friends growing up because the family moved a lot but then they went in different directions and drifted apart. They started to become less forgiving of each other and frustrated with certain things happening in the relationship.”

Getting them together in the kitchen for the show was a perfect opportunity for them to talk through these issues and find joy again with each other, she says.

As for Gino and Paula, who met on an online dating site and reconnected in the show’s kitchen, well, you’ll just have to watch and find out …

Bake and Make Up premieres Monday Aug. 29 at 9 p.m. EST on Vision TV. Click here for more information about the show.