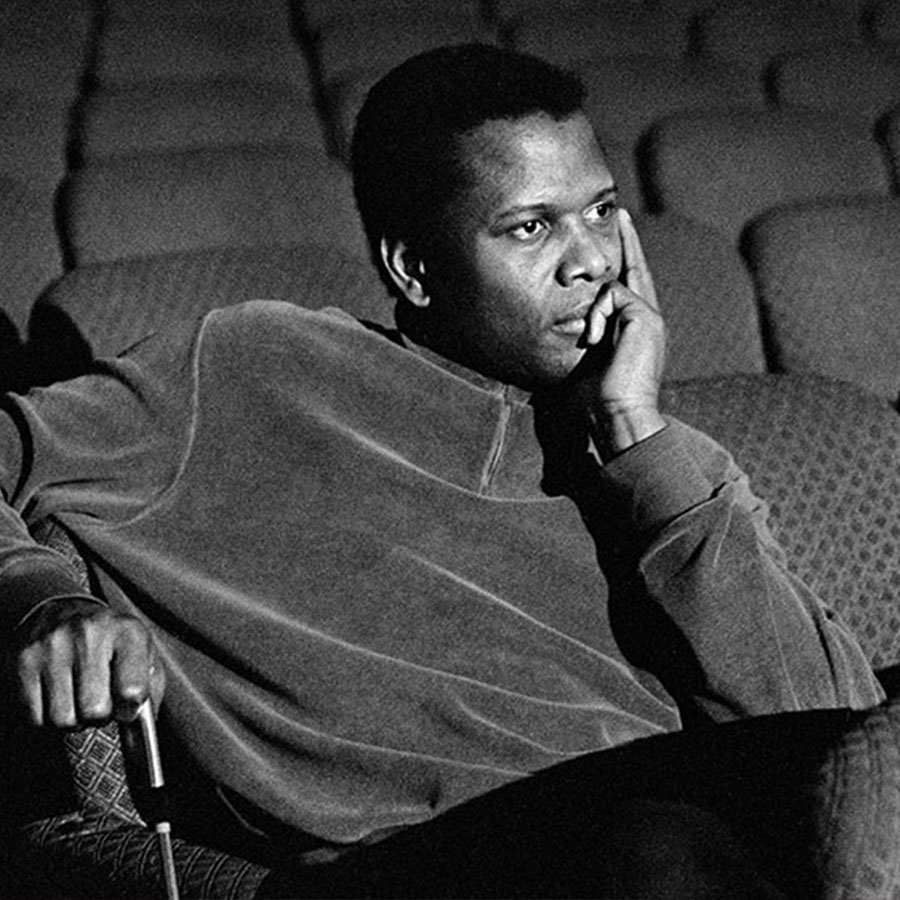 A scene from 'Sidney,' described as a "sweeping documentary portrait of the late, great Sidney Poitier," which receives a gala presentation at the 2022 Toronto International Film Festival. Photo: Courtesy of TIFF

If proof were needed that life is mostly back to pre-pandemic normal, the return of the Toronto International Film Festival to bricks-and-mortar cinemas after two fraught years of digital screenings and drive-ins should do the trick.

It’s a point further underlined by the promised, concurrent descent of Hollywood A-listers on red carpets around the city — and, if you’re lucky, at a Starbucks near you — for 11 days beginning Sept. 8.

As always with TIFF, the slate of films on offer is too broad to group under a general theme or themes. But there are notable categories, such as films directed by women and films chronicling Indigenous experience, that definitely weren’t championed in the festival’s earliest incarnations. Now, as then, though, the festival is a bellwether for Oscars attention.

These categories complement an eclectic slate gathered in “programmes” (in TIFF parlance) such as Contemporary World Cinema, Discovery, Midnight Madness, TIFF Docs, Wavelengths, Special Presentations, Short Cuts and, of course, Gala Presentations — the latter of which, ironically, tend to suck up the most media oxygen despite being the high-profile films you will undoubtedly have another chance to see outside the festival setting.

Really, as intriguing as the starry new Peter Farrelly comedy The Greatest Beer Run Ever might be, it already has a firm airdate on AppleTV+ (Sept. 30).

Whatever way you strategize your TIFF viewing — as a chance to see small, foreign films unlikely to play again, or to enhance your Oscar pool bets in the arcane live action short and sound mixing categories, or to make your friends on Facebook envious with blockbuster brags — you will surely be satisfied by the 47th annual edition of the sprawling event.

Herewith, we highlight 25 films that, for a variety of reasons, we expect to delight, inform, mesmerize, beguile and of course, thoroughly entertain. Best advice: be open to anything that lands on your radar or fits your schedule. That tiny, oddball, heretofore unplanned Nepalese documentary about yak herding could be the most brilliant thing you ever see. And you may only get this one chance to see it.

TIFF Synopsis: “Jane Fonda and Lily Tomlin star in this fusion of audacious comedy and bracing drama about estranged pals who are reunited when a beloved mutual friend dies, leaving her widower the target of a revenge plan.”

All That, Plus: We already know Tomlin and Fonda have amazing chemistry, courtesy their small screen hit Grace and Frankie. This has black comedy has winner written all over it.

All That, Plus: Sarah Polley’s cred as a director is sterling, and she is uniquely qualified to coax brilliant performances from her brilliant cast interpreting Toews’ brilliant novel. We expect it to be, well, brilliant.

All That, Plus: Is there anything Harry Styles can’t do? In addition to this meaty role, the pop superstar also hits screens this fall in Olivia Wilde’s thriller Don’t Worry Darling. Be the one to say you saw him first.

TIFF Synopsis: “The brilliant life and career of Canadian-born musician and activist Buffy Sainte-Marie is explored in this documentary, which spotlights the barriers the Indigenous performer crashed through across multiple mediums to emerge as an inspiration to marquee fans like Joni Mitchell.”

All That, Plus: Saint-Marie, a ridiculously youthful and vibrant 81, is a homegrown talent and an unparalleled trailblazer. It’s about time she got her due. It’s also a world premiere.

All That, Plus: Fraser is hot again — he’s already earmarked to receive a 2022 TIFF Tribute Award for this role as part of the festival’s eponymous gala fundraiser happening Sept. 11 — and early buzz about this title is very strong. Plus, no one frames misfits quite like Aronofsky (Requiem for a Dream, Mother!).

TIFF Synopsis: “A seemingly simple taxi ride across Paris evolves into a profound meditation on the realities of the driver, whose personal life is in shambles, and his fare, an elderly woman whose warmth belies her shocking past.”

All That, Plus: French cinema seldom disappoints and it’s wonderful to see a lead role played by 94-year-old Line Renaud.

TIFF Synopsis: “This sweeping documentary portrait of the late, great Sidney Poitier surveys his films, life story, and litany of accomplishments as an artist and activist who forever changed what it means to be Black in America.”

All That, Plus: Sidney Poitier. Enough said.

All That, Plus: All 176 people on board that plane were needlessly killed and many of them were Iranian Canadians, including protagonist Esmaeilion’s wife and nine-year-old daughter. A film honouring them and exploring the travesty of this crash seems like a worthwhile (not to mention humbling) time investment.

TIFF Synopsis: “Set in a Yorkshire geriatric hospital, this glorious reunion of Oscar winner Judi Dench and director Richard Eyre is a spirited homage to the idiosyncrasies of old age and the fortitude of health care workers.”

All That, Plus: It sounds pretty charming, and it co-stars Jennifer Saunders of Absolutely Fabulous fame.

All The Beauty and the Bloodshed (TIFF Docs)

TIFF Synopsis: “Academy Award–winning documentarian Laura Poitras chronicles the life and work of famed artist Nan Goldin, notably as she campaigns for museums to disassociate themselves from the Sackler family and their company Purdue Pharma, maker of OxyContin.”

All That, Plus: The film that scored Poitras that Oscar was 2014’s Citizenfour about Edward Snowden. Plus, Goldin’s innovative work will be showcased throughout the film. Very high expectations here.

All Quiet on the Western Front (Special Presentations)

TIFF Synopsis: “This impassioned, visually arresting interpretation of the classic German anti-war novel makes the pacifist case to contemporary audiences through its depiction of the horrible madness of World War I and the tragedy of a doomed generation.”

All That, Plus: You would think that governments would have gotten the memo by now about the horror, tragedy, and futility of war. Apparently not. Let’s bring the reminders.

TIFF Synopsis: “A visually stunning contemporary waltz through the life of the extravagant Empress Elisabeth of Austria (Vicky Krieps), whose beauty and corsetry was famed in lands far and wide.”

All That, Plus: Who doesn’t love a good costume drama-slash-period piece?

TIFF Synopsis: “Set during the Korean War, this visceral film tells the story of the U.S. Navy’s first Black aviator and his dedicated wingman, pilots who confront both geopolitical uncertainty and racist hostility with uncommon valour.”

All That, Plus: It sounds like a heck of a story, long overdue to be told, and it’s exclusively screening in IMAX at the Festival so expect an eye-popping experience in the style of Top Gun.

TIFF Synopsis: “Polish master Jerzy Skolimowski’s gripping new drama, which shared the Jury Prize in this year’s Cannes competition, follows an enormously sentient donkey as it experiences the best and worst mankind has to offer.”

All That, Plus: The film actually features six different donkeys — named Taco, Ola, Marietta, Ettore, Rocco and Mela — whom Skolimowski thanked in a speech in Cannes. And it spreads the vegetarian word. So, yeah!

TIFF Synopsis: “An investigative journalist uncovers the money, influence, and alarming rationale behind covert land grabs by some of the world’s most powerful countries, in this latest exposé from filmmaker Gabriela Cowperthwaite (Blackfish).”

All That, Plus: Did you see Blackfish!? Buckle up.

TIFF Synopsis: “From the kaleidoscopic mind of Kazakh filmmaker Emir Baigazin comes this modern fable about the meaning of life and what really matters, told through a story about a tech company that digitizes memories but suffers a catastrophic data loss.”

All That, Plus: Films from Kazakhstan don’t come along every day. And this might be your only chance to check it out.

All That, Plus: The original film, which was Kurosawa’s crowning achievement and is currently streaming for free on Kanopy, is beautiful. This adaptation, scripted by novelist Kazuo Ishiguro no less, and with the always superb Nighy at the centre, seems like a bullseye.

All That, Plus: It’s a world première and Hawkins is among the most reliably great actors of her generation.

TIFF Synopsis: “Drawing on Louis Armstrong’s audio diaries, documentarian Sacha Jenkins (Wu-Tang Clan: Of Mics and Men) revisits the music and reappraises the politics of the legendary jazz trumpeter and singer, whose career spanned the 1920s through the 1960s.”

All That, Plus: The music alone is enough to recommend it.

TIFF Synopsis: “Despite her position at the epicentre of the Brazilian bossa nova scene, singer Heloísa Maria Buarque de Hollanda, known as Miúcha, has been largely underappreciated. This documentary, an archive-rich dive into her career and personal life, aims to change that.

All That, Plus: “Epicentre” doesn’t begin to describe it. Miúcha was the sister of Chico Buarque, the pupil of Vinicius de Moraes, the second wife of João Gilberto, the musical partner of Antônio Carlos Jobim, and the voice accompanying Stan Getz’s saxophone. Her daughter is Bebel Gilberto, and co-director Zarvos is her cousin. So, yeah, there’s that.

TIFF Synopsis: “A kaleidoscopic weave of archival performances and candid interviews, this portrait of David Bowie from director Brett Morgen (Kurt Cobain: Montage of Heck) immerses us in the restless starman’s singular galaxy of music, art, and identity.”

All That, Plus: Early buzz suggests the film is dynamite. Morgen is an excellent documentarian (see also his powerful Jane Goodall doc from 2017) but he is especially on point with music.

TIFF Synopsis: “Robert Carlyle and Sarah Gadon star in Toronto director Carly Stone’s adaptation of Cea Sunrise Person’s 2014 memoir about her counterculture youth in the wilds of Western Canada in the 1970s and her struggle to balance filial devotion with a longing for a more conventional life.”

All That, Plus: Robert Carlyle is always a welcome screen presence, and we’ve been crushing on Sarah Gadon since All My Puny Sorrows.

TIFF Synopsis: “Chie Hayakawa’s quietly subversive debut feature unveils the beauty and dignity of human life, as found behind the benevolent facade of a state program that gives people aged 75+ the ability to end their lives voluntarily.”

All That, Plus: Like Japan, Canada has proved itself highly progressive in end-of-life matters. This seems like an inevitable discussion we’ll also be having as the population ages.

TIFF Synopsis: “Legendary, globe-trotting filmmaker Werner Herzog sets his sights on yet another mysterious landscape — the human brain — for clues as to why a hunk of tissue can produce profound thoughts and feelings while considering the philosophical, ethical, and social implications of fast-advancing neural technology.”

All That, Plus: Herzog, who turns 80 on Sept. 5, doesn’t make bad films. And this just sounds so cool.

All That, Plus: Daniel Radcliffe is absolutely fearless: see also 2016’s Swiss Army Man, where he played … wait for it … a corpse opposite Paul Dano. Plus, one suspects Weird Al’s story has surprising gravitas despite his outward zaniness.

TIFF Synopsis: “Based on the novel by Emma Donoghue and directed by Sebastián Lelio, The Wonder stars Florence Pugh as a nurse in 19th-century Ireland hired to investigate the case of a child who has not eaten for four months.”

All That, Plus: Speaking of great source material, and this falls under the gaze of Chilean auteur Lelio, arguably one of the most innovative directors going as 2017’s A Fantastic Woman and Disobedience and 2018’s Gloria Bell make clear.