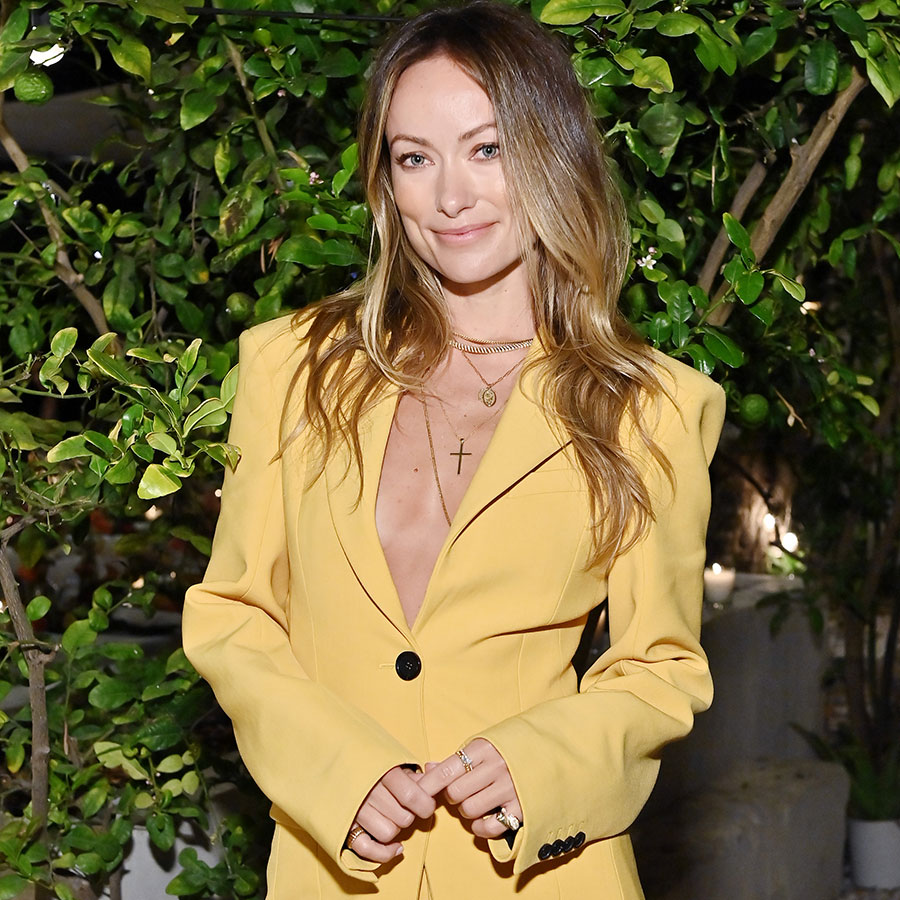 Olivia Wilde, seen here in 2021, has dealt with a barrage of behind-the-scenes drama on her new film 'Don't Worry Darling.' But in a new interview, she revealed she based the film's villain on a real-life controversial figure — Canadian professor Jordan Peterson. Photo: Stefanie Keenan/Getty Images

UPDATE: The ongoing Don’t Worry Darling drama spilled over into the Venice Film Festival this week for the film’s première. First, a viral video appeared to show one of the film’s stars, Harry Styles, allegedly spitting in co-star Chris Pine’s lap — though sources in Styles’ camp deny that he did so. Meanwhile, onlookers noted that another co-star, Florence Pugh, and the film’s director, Olivia Wilde, stayed far apart during the première — including Pugh missing the film’s press conference. It’s all par for the course for the behind-the-scenes scuffles that have become the focus for press around the beleaguered film. At least it got a standing ovation at Venice — one of the rare positive bits of publicity Don’t Worry Darling has enjoyed so far.  —Mike Crisolago

Those are not two names I expect to swim in the same sentence but, yet, here we are.

Styles’ much-buzzed film, Don’t Worry Darling, which is premièring next week at the Venice Film Festival, and which has already generated a plethora of headlines in its pre-publicity roll — in part, because the film is made by the pop idol’s director-turned-girlfriend Olivia Wilde — brought yet another stunner this week when it was revealed that the ostensible villain of the movie is based on a certain notorious Canadian.

“We based that character on this insane man, Jordan Peterson, who is this pseudo-intellectual hero to the incel community,” is how Wilde put it in no uncertain terms in Interview magazine about the part in her movie that is actually played by Chris Pine.

That, of course, would be the same Peterson, 60, who went from fairly obscure prof at the University of Toronto to then — starting about a decade back — growing a global following when he began posting his lectures on YouTube, slowly but surely developing into something of a general in the culture wars.

His self-help primer, 12 Rules for Life, has sold over a million copies. His personal life has, alas, rivalled a soap opera (that whole thing about him waking up in a coma in Russia last year) and his scandals are myriad — one even resulted in a Twitter ban this summer after he posted transphobic comments about Canadian actor Elliot Page.

The New York Times, meanwhile, dubbed him the “Custodian of the Patriarchy” for his controversial views, such as his belief that “forced monogamy” would stop men who join misogynistic hate groups known as “incels” from attacking or killing others when women won’t date them.

In terms of her attraction to the dude as a muse for her film, Wilde says he fit the vibe she wanted for the anti-feminist in her movie. “Jordan Peterson is someone that legitimizes certain aspects of the incel movement because he’s a former professor, he’s an author, wears a suit … so they feel like this is a real philosophy that should be taken seriously.”

If there is someone who might rival Peterson in headline generation, however — even though she is squarely on the other side of the ideological divide — it is perhaps Wilde herself, via a series of controversies and then self-inflicted wounds, according to industry watchers.

A talented actress, who earned a lot of goodwill with her directorial debut Booksmart, her new project got off on the shakiest ground when its original male lead, Shia LaBeouf, bolted (quit or fired remains a debate) only to be replaced by Styles, who then started a relationship with Wilde, only then to cause some discomfort from his co-star Florence Pugh, who is the leading lady in Don’t Worry Darling.

All of this backstory has swirled again in recent weeks because Pugh has essentially ghosted the publicity machine for the film (reportedly limiting her appearances to the one in Venice) and because of the way LaBeouf has Labeefed with Wilde over the way she characterized his departure in another interview with Variety. Sharing an email with media — which runs counter to what Wilde has said — he tsked, “You and I both know the reasons for my exit. I quit your film because your actors and I couldn’t find time to rehearse.”

None of this even gets to the bitter personal drama that has also shrouded the lead-up to the movie — something Wilde herself brought attention to when she poured gasoline on the fire re: her ongoing divorce from Ted Lasso star Jason Sudeikis, 46. Their split got extra nasty, you might recall, when she was served child custody papers while onstage at Cinemacon, the big movie conference in Las Vegas, back in the spring. Shockingly invasive and public — though Sudeikis has said he had “no idea” she would be served that way — Wilde relitigated this all by labelling it an “attack” in her Variety interview, and then saying, “It was not something that was entirely surprising to me. I mean, there’s a reason I left that relationship.”

All of which Wilde — who has always come off as pretty seasoned — must have known would only serve to cause another cycle of tweetstorms and tabloid prying about the divorce. Rather than … well … keeping attention on the movie itself, and its emerging director.

Sexism much? It is a question that Matthew Belloni, editor of the inside-baseball industry site, Puck, grappled with recently. “Wilde is being attacked online, pitted against other women, criticized for dating the superpopular star of her own movie, and altogether held to a different standard than her male peers, many of whom did all the same things she’s done, right?”

And yet, at the same time — knowing how savvy Wilde has long been about her image — he is also struck by her own media mismanagement.

Calling her meltdown in the press odd, he went on to say: “She’s sullying her own film. Even the greenest stars these days know to stay on-message, lest you become grist for the aggregator mills and social media hordes. Doesn’t Wilde — a 38-year-old who is under a microscope, has been doing this for a long time, is enjoying the kind of platform reserved for the upper echelon of filmmakers, and even happens to be the child of journalists — know better? She must, right?”

One thing is for sure: Don’t Worry Darling has set up quite a bit of in-house competition for itself. Can the movie itself even begin to compete with its juicy behind-the-scenes drama?