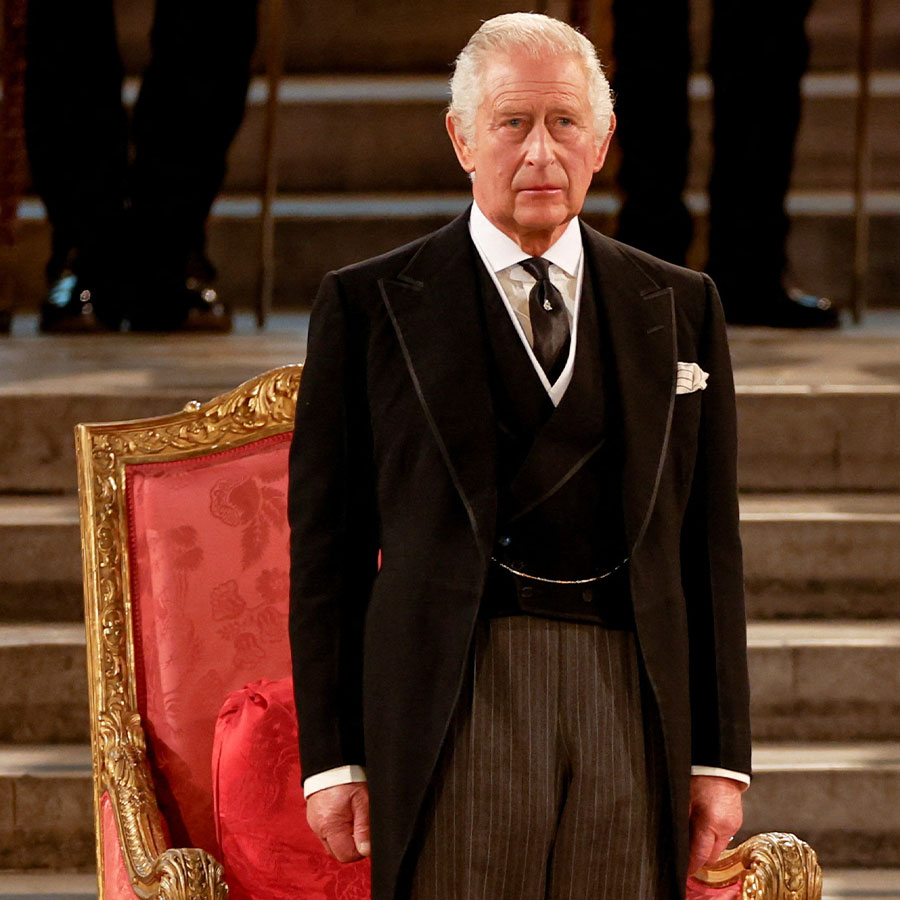 King Charles stands for the national anthem as he visits the parliament in Westminster, Sept. 12, 2022. Photo: John Sibley/Pool/Reuters

King Charles called Britain’s parliament the “living and breathing instrument of our democracy” and pledged to follow his late mother Queen Elizabeth’s example in maintaining its independence in an address to both chambers on Monday.

Charles arrived at Westminster Hall in London to a fanfare of trumpets with his wife Camilla, Queen Consort, for the address — part of a series of pageantry-filled ceremonies following the Queen’s death on Thursday at her holiday home in Balmoral, Scotland, after 70 years on the throne.

After the address, the new monarch set out for Edinburgh to join his siblings for a solemn procession when the coffin of Queen Elizabeth is taken to the city’s historic cathedral.

They will then take part in a vigil at St. Giles’ Cathedral, on the Scottish capital’s centuries-old Royal Mile, where the coffin will lie at rest before being flown to London on Tuesday.

Prime Minister Liz Truss — still in her first week in office — and parliamentarians from the House of Commons and the House of Lords attended the address in Westminster Hall.

The Lord Speaker described the late Queen as “both a leader to and servant of her people”.

Charles and Camilla sat on ceremonial chairs, with cavalry troopers in red tunics and plumed helmets standing to attention behind.

In his address, Charles said: “While very young, Her late Majesty pledged herself to serve her country and her people and to maintain the precious principles of constitutional government which lie at the heart of our nation. This vow she kept with unsurpassed devotion.

“She set an example of selfless duty which, with God’s help and your counsels, I am resolved faithfully to follow.”

The assembly sang “God Save the King”.

Charles, 73, who automatically became King of the United Kingdom and 14 other realms including Australia, Canada, Jamaica, New Zealand and Papua New Guinea on his mother’s death, is known for expressing his views on matters ranging from the environment to youth issues.

He has suggested that as King, he might have to moderate his style, in keeping with the tradition that the monarch keeps out of political matters.

On Sunday, the Queen’s oak coffin, draped in the Royal Standard of Scotland, was taken by hearse on a six-hour journey from Balmoral through picturesque Scottish countryside, villages, small towns and cities to Edinburgh.

Tens of thousands of well-wishers lined the roads to pay their respects, while huge crowds, some in tears, gathered in Edinburgh to greet the cortege.

“I think when the Queen’s coffin emerged from Balmoral Castle yesterday, I think that it was a moment of enormous significance,” John Swinney, Scotland’s Deputy First Minister told BBC radio.

“I think people drew breath, because what we’ve all been living through over the last few days suddenly became real, it became visible.”

When the coffin arrives at St. Giles’ Cathedral, the Duke of Hamilton and Brandon, the premier Scottish peer, will place the Crown of Scotland on it.

After a service, the coffin will rest there for 24 hours to allow people to pay their respects. A vigil will be mounted by soldiers from the Royal Company of Archers – the sovereign’s “Body Guard in Scotland”.

Charles, who will also visit the Scottish parliament and meet Scotland’s First Minister Nicola Sturgeon, will later mount a vigil at 7.20 p.m. (1820 GMT) along with other royals.

On Tuesday, the coffin will be flown to London where on Wednesday it will begin a period of lying in state until early on Sept. 19 – the day of Elizabeth’s state funeral – on a catafalque at Westminster Hall.

It will be guarded by soldiers or by Yeoman Warders – known as beefeaters – from the Tower Of London.

Members of the public will be allowed to process past the coffin, which will be covered by the Royal Standard with the sovereign’s Orb and Sceptre placed on top, for 24 hours a day until 6:30 a.m. (5:30 GMT) on Sept. 19.

“Those wishing to attend will be required to queue for many hours, possibly overnight,” the government said in a statement. “Large crowds are expected.”

Meanwhile thousands of people continued to gather at royal palaces across Britain, bringing flowers. In Green Park near Buckingham Palace, where some of the tributes are being taken, long lines of bouquets now snake around the park allowing mourners to read the tributes.

“It’s really touched me, losing the Queen,” Amy Gibbs, 43, said outside Buckingham Palace. “I think she was an amazing lady that did her absolute best and gave us everything.”

Britain last saw such a display of public mourning in 1997 after the death of Charles’s first wife, Princess Diana, in a Paris car crash.

In his first public comment since the Queen’s death, Prince Harry — Diana’s son — paid an emotional tribute to his “granny” on Monday, saying she would be sorely missed not just by the family, but the world over.

“Granny, while this final parting brings us great sadness, I am forever grateful for all of our first meetings — from my earliest childhood memories with you, to meeting you for the first time as my Commander-in-Chief, to the first moment you met my darling wife and hugged your beloved great grandchildren.”

“We, too, smile knowing that you and grandpa are reunited now, and both together in peace,” Harry said, a reference to Elizabeth’s husband of 73 years Prince Philip who died last year.

(Reporting by Michael Holden in London and Andrew MacAskill in Edinburgh; Additional reporting by Kate Holton, Muvija M, Will Russell and William James; Editing by Angus MacSwan and Janet Lawrence)