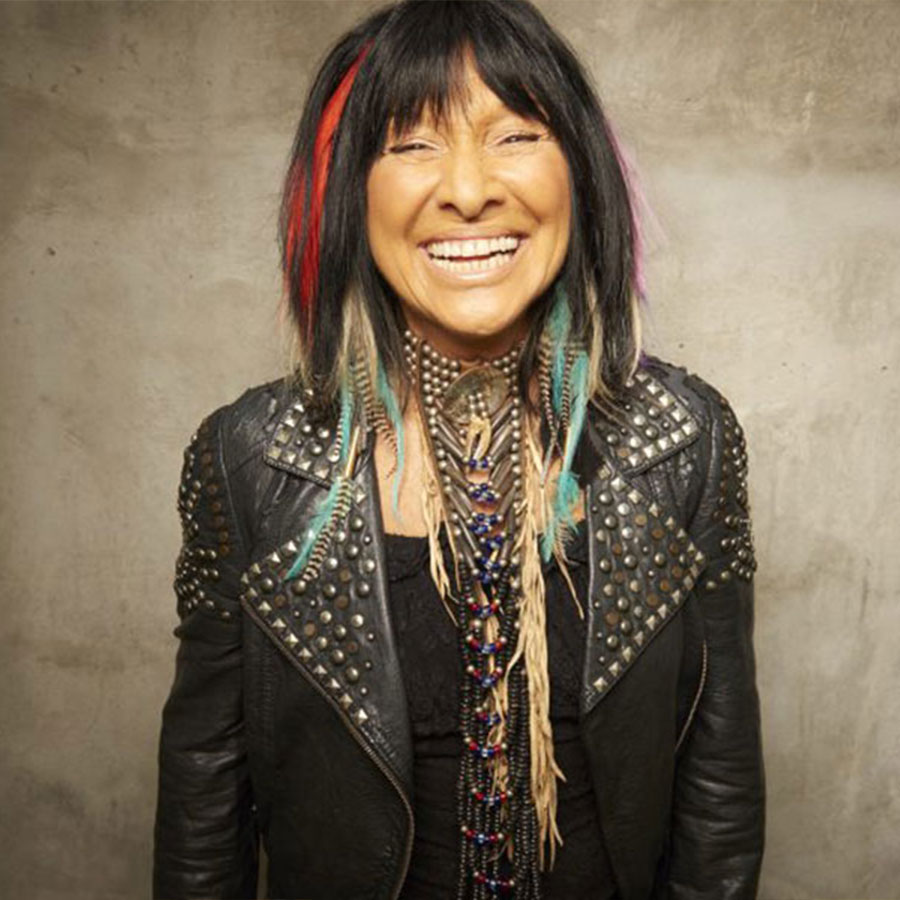 The new documentary 'Buffy Sainte-Marie: Carry It On' premières at the 2022 Toronto International Film Festival, where the music legend will also receive TIFF’s Jeff Skoll Award in Impact Media. Photo: Courtesy of TIFF

Buffy Sainte-Marie lets me in on a little secret:

“Here’s the key to me — it has to be fun or I don’t do it,” the 81-year-old music legend says over a Zoom call from her home in Hawaii. “I never have drunk the Kool-Aid — the popular trendy thing that insecure people say about how it’s all over when you’re, I don’t know, pick an age. I mean, that’s such a crock. I’m still healthy and I’m having as much fun and I feel pretty much the same as I did at 70, 60, 50.”

But when I ask if she still likes to challenge herself by trying new endeavours — like how she experimented with electronic music on her 1969 album Illuminations, regarded now as the first-ever quadraphonic electronic vocal album, or how she became the first artist to use digital communication to record an album, Coincidence and Likely Stories, on an Apple computer way back in 1992 — she’s quick and blunt with an answer.

“I don’t challenge myself on much of anything except don’t eat too much cake.”

Sainte-Marie laughs — an infectious, playful, inviting and, yes, perhaps a tad mischievous, laugh — which makes it impossible not to guffaw along with her.

And that’s the joy of Buffy Sainte-Marie — a warmth and uniqueness of spirit that is evident in the new documentary, Buffy Sainte-Marie: Carry It On, which made its world première at the Toronto International Film Festival last week (where the singer also received TIFF’s Jeff Skoll Award in Impact Media).

Directed by Madison Thomas, the doc covers Sainte-Marie’s life and six-decade-long career of trailblazing music, performance and activism. That includes her legendary discography; her time in the 1960s Greenwich Village folk scene alongside the likes of Bob Dylan and Joni Mitchell; her 1970s and ’80s appearances on Sesame Street — making her not only the show’s first Indigenous star but also, after the 1977 episode in which she breastfed her son, the first woman to nurse a child on television; winning the Polaris Prize in 2015; and, of course, becoming the woman widely touted the first and only Indigenous person to ever win a competitive Oscar.

Sainte-Marie, ever humble, stops me in my tracks. While she did win the Oscar (as well as Juno, Golden Globe and BAFTA awards) in 1983 for co-writing “Up Where We Belong” from An Officer and a Gentleman, she makes sure to point to actor and filmmaker Taika Waititi, who is half Maori, who won the Best Adapted Screenplay Oscar in 2020 for Jojo Rabbit. She also acknowledges American Cherokee actor Wes Studi’s 2019 honorary Academy Award, though does admit that the announcement of that Oscar had a disappointing tinge.

“When it was announced, Christian Bale — oh God, I’m such a fan — he came out on the stage and he said that Wes was the first Native American ever to win an Academy Award. And I almost died. My heart broke,” she admits.

“So there’s two earned and an honorary,” she adds of the Indigenous Oscar winners. “But I keep saying, where’s Tantoo Cardinal’s?”

Buffy Sainte-Marie: Carry It On features an A-list roster of talent — from Joni Mitchell to Taj Mahal, Alanis Obomsawin and Robbie Robertson — reflecting on its subject’s life and work.

But while Sainte-Marie radiates joy, her life certainly hasn’t always allowed for it. Born to Cree parents on Saskatchewan’s Piapot 75 reserve, she was abandoned and then adopted by a couple with Mi’kmaq heritage and moved to Massachusetts. The film chronicles her early years of abuse at the hands of family members, and how she grew up in places with no other Indigenous residents (save for one postal carrier), attending school where they glorified figures like Christopher Columbus while declaring that “Indians didn’t exist.”

Later in the film, she recalls “getting beat up in the car on the way to the Oscars. I was getting really just verbally tweaked” by then-husband Jack Nitzsche, her “Up Where We Belong” co-writer, who had separation anxiety and wanted her to leave show business after they got married (she did for a number of years).

“I’ve been me for a real long time so I’m pretty much used to my personal history. No hesitation at all,” Sainte-Marie says, when asked about sharing such personal and traumatic experiences in the film. “Audiences are hearing about some things for the first time, but I’ve been living with my realities throughout my life.”

She adds that “when you are working with someone else, constructing, deconstructing, reconstructing your life, you get to be relieved that they can make the choices (about what goes into the film).”

The documentary also explores how her activism on behalf of Indigenous rights led to FBI surveillance in the 1960s and ’70s and, eventually, blacklisting on American radio stations.

“There were the bozos in the Johnson and Nixon White House years with J. Edgar Hoover and the FBI keeping me under surveillance for no reason at all, when I’d never broken the law,” she explains.

She notes in the documentary that, “In the early ’60s people would just be flabbergasted that I would dare to use the word ‘genocide’ regarding the North American holocaust. It took another over 50 years before Truth and Reconciliation brought the facts to light and vindicated my music.”

But, in typical Buffy fashion, the adversity, though monumental, only steeled her resolve.

“During all those years I just kept writing, painting, producing, exploring electronic music and computers, writing Indigenous curriculum, etc.,” she says. “There’s more to being an artist than just working within the business model.”

Sainte-Marie is, in fact, both a teacher by trade — she earned a degree in teaching from the University of Massachusetts Amherst before embarking on her music career — and at heart. That includes the Cradleboard Teaching Project, which she founded in 1997 to provide a multimedia curriculum to Indigenous children, to educate them about their own, and other, Indigenous cultures.

Of all her accolades, Sainte-Marie counts her success with Cradleboard as among her proudest achievements.

“What I’m most proud of was learning that two of my early scholarship recipients had gone on to become the founders and presidents of Tribal Colleges!” she says. “It blows my mind that with some little contribution from me, somebody else goes on to maximize the gift in a hundred ways. Think of all the students they have reached.”

One of the most intriguing parts of Buffy Sainte-Marie: Carry It On occurs in the early moments, when the singer declares, “I’m kind of not surprised to be 80 years old and have things where they are right now for me professionally.”

When I ask her what she means by that, she recalls how, along with her Indigenous activism, she was writing songs about environmental protection in the ’60s. “But it was too early.”

Now, she says, “the world is riper, more accurately informed … I never took it personally that I had the medicine before the patient was aware of the problem. Sometimes you have to carry the medicine for a long time before it can be effective.”

When it comes to people finally recognizing and acknowledging the horrors Indigenous communities have faced, and continue to face, throughout North America — which her music and activism have addressed for decades — Sainte-Marie says it’s a bittersweet feeling.

“Truth and Reconciliation is very important in laying out the bulletproof facts, and presenting how to make it better, but it’s just the first step, a cornerstone. The work has only just started,” she explains. “But Indigenous knowledge and resistance isn’t new. I’ve known for over 50 years that we have to get rid of the Doctrine of Discovery (a 15th century church doctrine that gives colonizers sovereignty over Indigenous peoples) in the modern nations, but many Canadians only heard about it recently when Pope Francis came to Canada to apologize to us.”

Sainte-Marie admits that, when it comes to true and ongoing reconciliation and healing for Indigenous communities in North America, she has “Huge hope but small expectations.

“The progress we’ve been making in my lifetime will probably continue. If non-Indigenous people join us it’ll go that much faster, but if they don’t we’ll keep on trying the same as always. Just because you don’t know our heroes, doesn’t mean they don’t exist, and they’re everywhere, within our communities and within yours too.”

At TIFF this year, Sainte-Marie will be honoured with the Jeff Skoll Award in Impact Media, which “recognizes leadership in creating a union between social impact and cinema.”

“Buffy Sainte-Marie has been challenging and changing the world for 60 years,” Cameron Bailey, CEO of TIFF, said in a statement. “Her groundbreaking music, her lifelong activism on behalf of Indigenous people, and her passion for teaching have transformed countless hearts and minds. She is a singular icon.”

Perhaps it’s proof of Sainte-Marie’s assertion that the rest of the world is catching up to what she was putting down 50 years ago. But for her part — in the documentary and in person — she seems at peace.

Sainte-Marie lives in solitude in Hawaii, noting that, “I just feel super healthy. I get up in the morning and I feel great. I sleep well … I grow a garden and I eat tons of herbs and greens and stuff. I hear the birds in the morning. I hear lots and lots of wild chickens around. I got wild pigs all over the place. I got goats in the pasture and kitty cats in the house.”

For her, it’s the perfect arrangement for her artistic pursuits — including writing and painting — and an opportunity to reconnect with nature.

“I’ve always thought that the gluteus maximus — that’s your butt — is one of the most important revitalizing and communication [tools] with nature that we have,” she says. “You just sit your butt down on the ground and stay there for a little while and it just fixes you.”

She also eats “like a champion,” works out and takes time to “turn off my head and my ego and jump around with everybody else.”

But, she notes, if the documentary of her life has one overarching message for audiences, it’s one that’s paraphrased from her 1972 song “Jeremiah.”

“Some will tell you what you really want ain’t on the menu. Don’t believe them. Cook it up yourself and then prepare to serve them,” Sainte-Marie recites.

“You don’t look at somebody who’s ignorant about stuff and get mad at them. You find a way, like in a song or a phrase or something, to cook that idea up, make it delicious, and then give it to them, serve them.”

It’s a mantra that’s served Sainte-Marie well in her decades of activism and advocacy, but in a modern context it also feels like a roadmap for finding common ground in an increasingly divided world.

“So whether it was a song or a painting or an initiative like Creative Native, or the Cradleboard Teaching Project, or my scholarship foundation, you just go for it. You just try. And sometimes you can,” she says. “And then you give the people your gift. And there’s just no bad feeling about it at all. Cook it up yourself. And then prepare to serve them. And won’t they be surprised?

“That’s what I mean by carrying the medicine for a long time.”

Buffy Sainte-Marie: Carry It On screens for the final time at TIFF on Saturday, Sept. 17. Click here for more information.