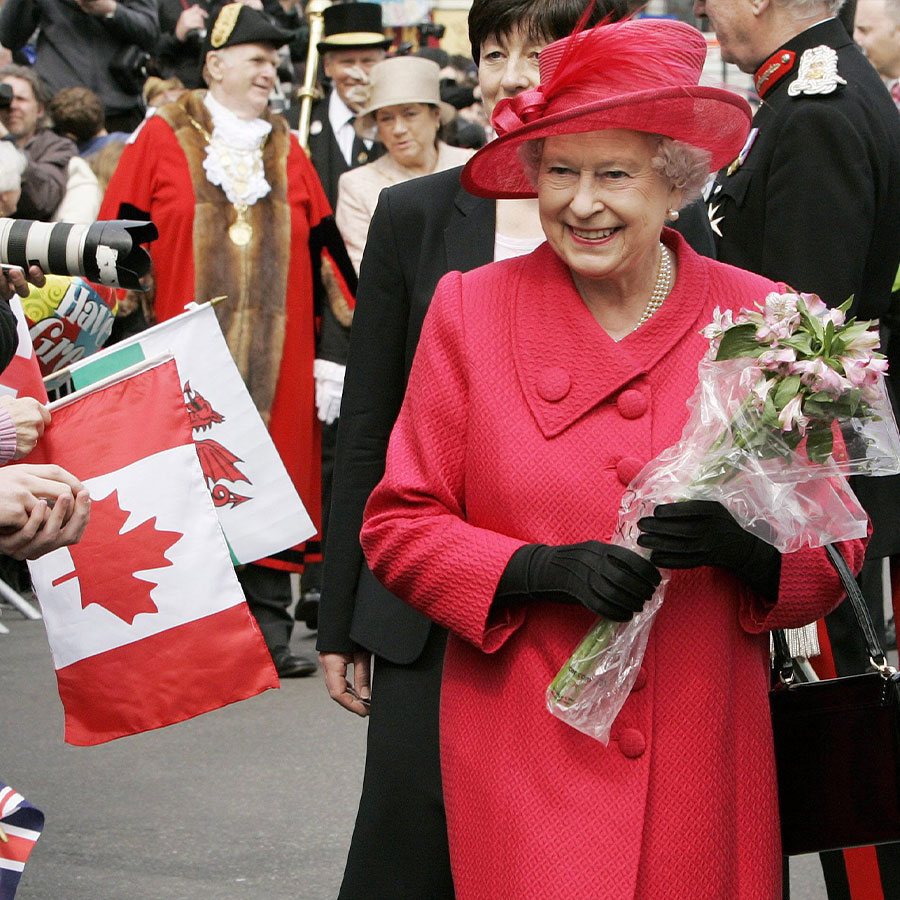 Queen Elizabeth II passes a Canadian flag during a walkabout to celebrate her 80th birthday in Windsor, U.K., on April 21, 2006. Canadians who wish to pay tribute to the late monarch ahead of her funeral can do so digitally or via handwritten note. Photo: AP-Kirsty Wigglesworth, Pool/The Canadian Press

Flags flew at half mast, the CN Tower lights went dark, and the Canadian Parliament delayed the opening of its session until next week — all to pay tribute to the recent passing of Queen Elizabeth II.

And on Tuesday, Prime Minister Justin Trudeau announced that Monday, Sept. 19 will be deemed a federal holiday so Canadians can mourn the Queen on the day of her funeral.

Trudeau said the federal government is still having discussions with provinces and territories to ensure the various governments are aligned.

“There are still a few details to be worked out, but declaring an opportunity for Canadians to mourn on Monday is going to be important,” Trudeau said.

Ontario Premier Doug Ford, however, has said that employees can mourn and reflect on the Queen’s legacy by observing a moment of silence at 1 p.m. on Sept. 19, but that it will not be a statutory holiday.

Similarly, Quebec Premier François Legault said Quebec will commemorate the day but, like Ontario, it will not be a holiday.

The Government of PEI issued a statement that declares Sept. 19 a, “one-time statutory holiday” for employees in the province who are all provincially regulated.

And Seamus O’Regan Jr., the Minister of Labour, tweeted that Sept. 19 will be a holiday for federal government employees while federally regulated employees have the option of observing it.

How Canadians Can Watch the Queen’s Funeral Ceremony

Canadians can watch the broadcasts of the Queen’s funeral on television on the BBC, CBC, and other local news networks. It will also be streamed on various news websites.

The Queen will be laid to rest at Westminster Abbey on Sept. 19. The funeral will be held at 11 a.m. local London time (6 a.m. ET), with the procession of the Queen’s coffin to Westminster Abbey taking place 15 minutes before.

How Members of the Public Can Pay Tribute to the Queen

While governments are honouring the Queen, there are several opportunities for members of the public to pay their respects too.

Both the Canadian and US sides of Niagara Falls are being illuminated with royal blue lights during the official mourning period of the Queen’s death. Visitors can see the Niagara Fall’s lighting from 10:30 p.m. to midnight every night until the Queen’s funeral.

As well, the Government of Canada published a book of condolences on their website for members of the public to share tribute messages to the Queen and the Royal Family online.

Members of the public who wish to share their condolences privately can send an email to [email protected]. They can also mail a letter to:

For members of the public who would like to sign books of condolences in person, the provinces and territories have set up physical books in various government buildings across Canada.:

Condolence books are available to sign in Victoria in the Parliament Building’s Hall of Honour from 8:30 a.m. to 4:30 p.m. and Government House from 9 a.m. to 4 p.m.

A condolence book is also available at the Vancouver Law Courts’ Great Hall.

The Alberta government has requested that members of the public do not bring flowers to public buildings because they must be removed for security reasons. Instead, members of the public should consider donating to the Canadian Red Cross Society or Canadian Cancer Society — two of the Queen’s favourite charities.

Condolence books are available to sign at Rideau Hall in Winnipeg, the Manitoba Legislative Building, and city halls in Winnipeg, Brandon, and Steinbach.

Members of the public can sign a condolence book in person at Rideau Hall in Ottawa between 9 a.m. and 7 p.m.

Those wishing to leave flowers can lay them by the large foundation beside Rideau Hall’s main doors.

A condolence book is also available at the Legislative Assembly of Ontario in Toronto.

A condolence book is available to sign in the Confederation Building in St. John’s from 9 a.m. to 5 p.m.

Condolence books are available to sign at Government House and the Province Housing in Charlottetown.

There will also be condolence books available in provincial libraries in Souris, Montague, Summerside, and Tignish, available between 8 a.m. and 4 p.m. each day.

There will be condolence books available to sign at Riverview Town Hall in Riverview, New Brunswick, the Village Office in McAdam, and Government House and the Legislative Assembly in Fredericton.

A condolence book is available to sign at Government House in Halifax between 10 a.m. and 4 p.m.

Members of the public can leave flowers at the flagpole.

A condolence book is available to sign at the Taylor House in Whitehorse.

Members of the public are encouraged to donate to charity, as the Queen was a patron of over 600 charities, public service organizations, professional bodies, and military associations across the UK and the Commonwealth.

A condolence book will be made available to sign in the Great Hall of the Legislative Assembly Building in Yellowknife.