Whodunit?: From ‘See How They Run’ to ‘Glass Onion,’ Charting the Revival of the Murder Mystery Genre 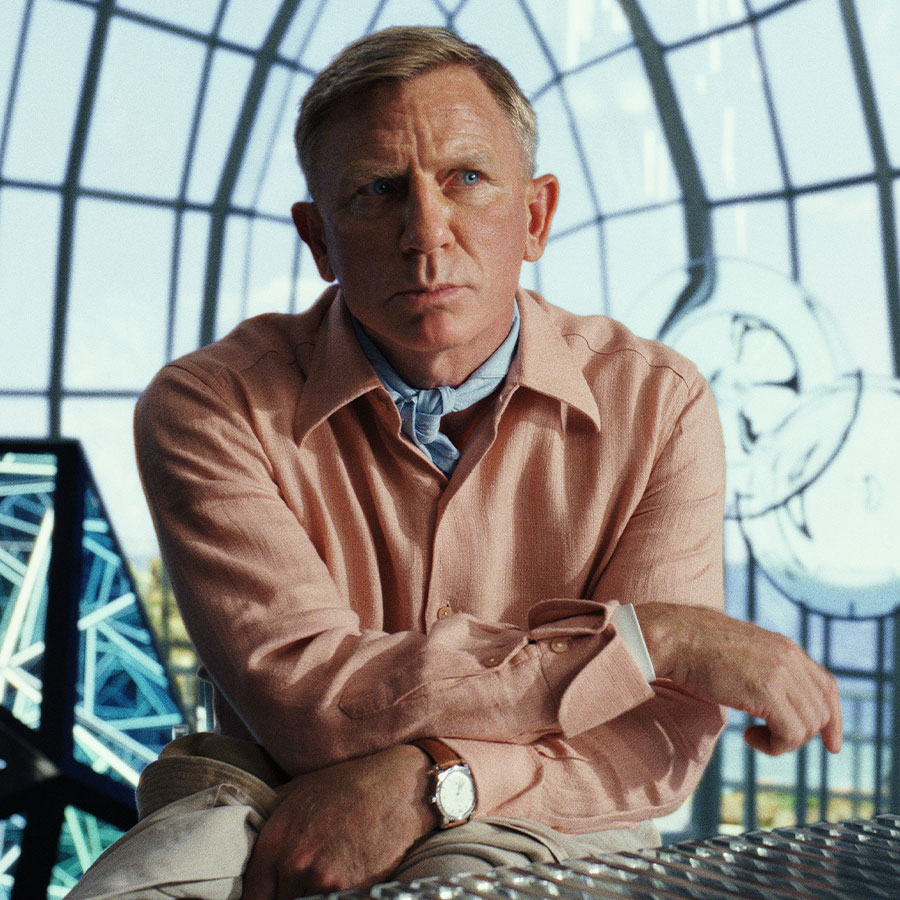 After years spent entertaining fans on the small screen, breezy murder mysteries — refusing to be killed off — are finally back in theatres. And you can thank Agatha Christie.

Her name is the first words spoken in the new whodunit See How They Run (in theatres now). Even within the genre’s typical self-referential glee, the movie gives her more than a passing nod; its title was the original name for the radio play that eventually became her play The Mousetrap. Meanwhile, the movie’s murder plot is woven into the celebrated play and takes place against the backdrop of the London theatre world.

The whodunit-within-a-whodunit features David Oyelowo, Saoirse Ronan, Sam Rockwell, Adrien Brody, and Ruth Wilson. It takes its name from the lyrics of “Three Blind Mice” (a nursery rhyme that die-hard mystery fans will also recognize as the unofficial signature song of Columbo).

See How They Run is set in 1953 at a party marking the 100th performance of The Mousetrap (around the same time as the notorious Rillington Place murders, which get a mention). It becomes both homage and a clever work around to Christie’s clause that no film adaptation could be made until after its initial run ended. As everyone today knows, The Mousetrap famously went on to become the longest-running play in the world (closed only temporarily during the pandemic pause).

“The film is set in 1953, but it only functions if you know the history of murder mysteries,” See How They Run director Tom George told The Guardian. “The genre is almost the main character.” So are costumes and a strong setting into which audiences can escape.

To solve the backstage murder, George takes viewers behind the scenes and into ornate West End stalwarts like The Old Vic, Hoxton Hall, St. Martin’s Theatre and even The Savoy Hotel, filming on location in early 2021 during the pandemic’s third London lockdown.

A Brief History of Murder

Until the stealth box office success of Kenneth Branagh’s feature film foray as Hercule Poirot in the 2017 Murder on the Orient Express remake, however, the most notable “recent” big-screen hit whodunit was probably Gosford Park, Robert Altman’s 2001 Academy Award-winning country house period piece. The past decade, however, has seen a rebuilding of the golden age formula back up on television through projects like Sarah Phelps’ prestige BBC adaptations like And Then There Were None and David Suchet’s swan song as Poirot.

It all fed the appetite for throwback whodunits. In 2019 Rian Johnson’s original murder mystery Knives Out became a critical and commercial hit (the year’s second-highest grossing non-franchise film); not coincidentally, Netflix’s most-watched movie that year was another squarely in the recently-revived genre: the Adam Sandler-Jennifer Aniston flick Murder Mystery. Like the See How They Run narrator says: they’re a cash cow. Branagh got a sequel in Death on the Nile and at least three further Knives Out outings have been promised.

But when filmmaker Johnson debuted his original Knives Out murder mystery at the Toronto International Film Festival in 2019, he also introduced a rare screening of the twisty sophisticated 1973 whodunit The Last of Sheila. In the lesser-known scavenger hunt murder mystery, a cackling James Coburn stages a reunion of Hollywood friends on a yacht in the South of France; he presides over a cast that includes James Mason, Raquel Welch, Richard Benjamin, Dyan Cannon and a young Ian McShane. Inspired by co-writers Anthony Perkins and Stephen Sondheim’s real-life penchant for staging celebrity scavenger hunts, Sheila satirizes the industry and its denizens with a knowing wink.

It was, however, arguably Sidney Lumet’s adaptation of Murder on the Orient Express the following year, with Albert Finney as Belgian sleuth Hercule Poirot, that cemented the genre’s mainstream popularity on the big screen. The stranded train ensemble earned Ingrid Bergman the Academy Award for Best Supporting Actress and spurred several iterations with Peter Ustinov taking up the role of Poirot, leading A-list casts in Death on the Nile (1978) and Evil Under the Sun (1982). After the 1985 arrival of the energetically playful black comedy murder mystery Clue — based on a board game — in cinemas, the Ustinov movies lost momentum and quietly went from being lavish period adaptations filmed in enviable locales to TV movies set in then-present day.

Glass Onion: A Knives Out Movie (on Netflix Dec. 23), Johnson’s second installment in the continuing adventures of peripatetic Southern detective Benoit Blanc, begins much the same way as The Last of Sheila. Now free of James Bond (and with palpable relish), Daniel Craig, 54, is back as the drawling gentlemanly sleuth to solve another star-studded murder mystery — this time, set early in the pandemic lockdown among a group of nouveau-riche frenemies on an luxury yacht bound for an island compound in Greece. The glass onion here is not the 1968 Beatles song, but the architectural detail of a gleaming contemporary mansion belonging to their host Miles Bron (Edward Norton), a billionaire à la Elon Musk.

Over its premiere weekend at TIFF, Glass Onion received an even more rapturous critical and audience reception than its predecessor. Johnson is shaping up to be the Ruth Ware of blockbuster whodunnits: like the bestselling British author who’s been dubbed Christie’s heir apparent, Johnson wears the Agatha Christie influence proudly. “Every single time, she found a way into it that felt unique and fresh,” he said admiringly of the Queen of Crime in a recent interview, “and you could tell it was challenging her creatively.”

In See How They Run, at curtain call, The Mousetrap cast entreats the audience to preserve the puzzle play’s solution for others to enjoy and not spoil who done it. Filmmaker Rian Johnson made a similar plea at Glass Onion: A Knives Out Movie‘s TIFF premiere.

Whodunit? Who cares?! Fans prize the puzzle for the distraction it provides, inviting us to follow along and draw our own conclusions. In one of See How They Run’s flashbacks (a device the screenwriter insists is the last refuge of a “moribund imagination”), Leo bristles at the idea of assembling the suspects for a final reveal because it’s been done a thousand times. The plots of tight construction with no seeming-throwaway detail wasted are often simple and — at least in fair-play mysteries — predictable solutions. That formula is one of its pleasures.

Self-referential (and self-deprecating) humour has been a staple of the genre since the golden age. Take Cards on the Table, Christie’s puzzle mystery about a host murdered by one of his guests during a bridge game. The author inserts her fictional self-caricature, Ariadne Oliver, in the story to discourse on the art and craft of crime and techniques in detective fiction. Like the audience, the characters have more than a passing knowledge of clues, motives, misdirection, reversals and red herrings.

Familiarity with the expected tropes and traps is essential: in See How They Run, the meta-dissection and remix of the genre initially comes in a voice-over by Leo Köpernick (Adrien Brody, 49), a washed-up Hollywood director begrudgingly working in postwar London. “You seen one whodunit, you seen them all,” he wearily explains, shortly before fulfilling the stated formula of giving the audience a violent death in the first frames.

It’s no mystery why the genre seems to come back from the dead whenever audiences most need comic relief. A darkly comic puzzle is both entertaining and, by the end of the story, offers reassurance about the restoration of order and justice.

The Cast of Characters

Although the murder-mystery construct allows for a lot of flexibility within its conventions, success doesn’t lie in the solution. (No matter how ingenious and unexpected the set-up or its solution may be.) Aficionados of the genre know what element can turn even a sub-par puzzle construction into a crowd-pleaser: getting the ensemble cast just right.

What most of the whodun-hits have in common is that they star a veritable murderer’s row (no pun intended) of esteemed and award-winning actors — with a few newcomers in the mix. Gathering together actors from different generations and fandoms to draw on their appeal is a smart business strategy — it may not have worked with Ned Beatty, Mary Stuart Masterson and George Burns in 1994’s Radioland Murders (the nostalgic 1930s whodunit based on a story by George Lucas) but that movie had bigger problems than casting. It’s about creating chemistry (like the crackle and pop between Bette Davis and her nurse-companion Maggie Smith in the 1978 Death on the Nile).

In See How They Run, enthusiastic rookie Constable Stalker (Saoirse Ronan) plays off Sam Rockwell’s drunken Inspector Stoppard (yes, like the playwright) on a briskly paced backstage murder case. Over the years other unexpected combinations — Carrie Fisher, Hayley Mills and John Gielgud in Appointment with Death (1988) for example, or Maggie Smith and Diana Rigg locking horns in Evil Under the Sun — have similarly sizzled. With Glass Onion, those not already appreciative of Janelle Monáe’s acting chops, Kathryn Hahn’s canny timing or Kate Hudson’s gifts as a deceptively daffy comedienne (like Dyan Cannon before her in The Last of Sheila) will be enthralled.

Each character plays to the hilt and gets a backstory that makes them a viable suspect. And in the best ensembles, that sense of play is obvious in their performance (think: Christopher Plummer and Jamie Lee Curtis in Knives Out). In Glass Onion it’s not just Daniel Craig having the time of his life as a dandy detective in cabana-striped seersucker. The rest of the cast chew the scenery with abandon.

A Formula for Murder

Above all, the best murder mysteries respect the traditional formula of an intimate group of disparate suspects assembled at a single location, while expanding its boundaries. Literary and cultural historian Lucy Worsley, author of the new biography Agatha Christie: A Very Elusive Woman, credits the 20th century author with subtle subversiveness, one that the new crop have arguably picked up on. By undermining the society she seemed to glamorize, Worsley deems Christie “thrillingly, scintillatingly modern.” As all the best murder mysteries do, See How They Run explores the ethics of treating true crime as inspiration for entertainment, while the Knives Out movies probe the contours of contemporary class privilege and, now, influencer culture.

There’s also usually a healthy dose of drollery in the manner of Murder by Death, Neil Simon’s affectionate 1976 send up of mystery authors and their fictional detectives. The modern exemplar remains seasonal favourite Clue (1985), but it has inspired everything from the millennial cast The Afterparty (where the suspects are old friends at a high school reunion who each have secrets and a grudge against the victim) to Only Murders in the Building, where septuagenarians Martin Short and Steve Martin skulk around a historic New York apartment building creating a true-crime podcast with Selena Gomez.

The genre even covers off Gen Z. Created for — and about — the TikTok generation in the grand tradition of its forebears, this summer’s comedy-horror whodunit Bodies Bodies Bodies unfolds among youthful guests playing a round of the parlour game Murder in the Dark at a weekend party. Faster than you can say “And Then There Were None,” the remote mansion where they’re all weathering a hurricane loses cell service and the guests are picked off by an unseen mastermind, one by one. But if there’s no access to social media to share it, did it even happen?

Proof that every generation gets the whodunit it deserves.