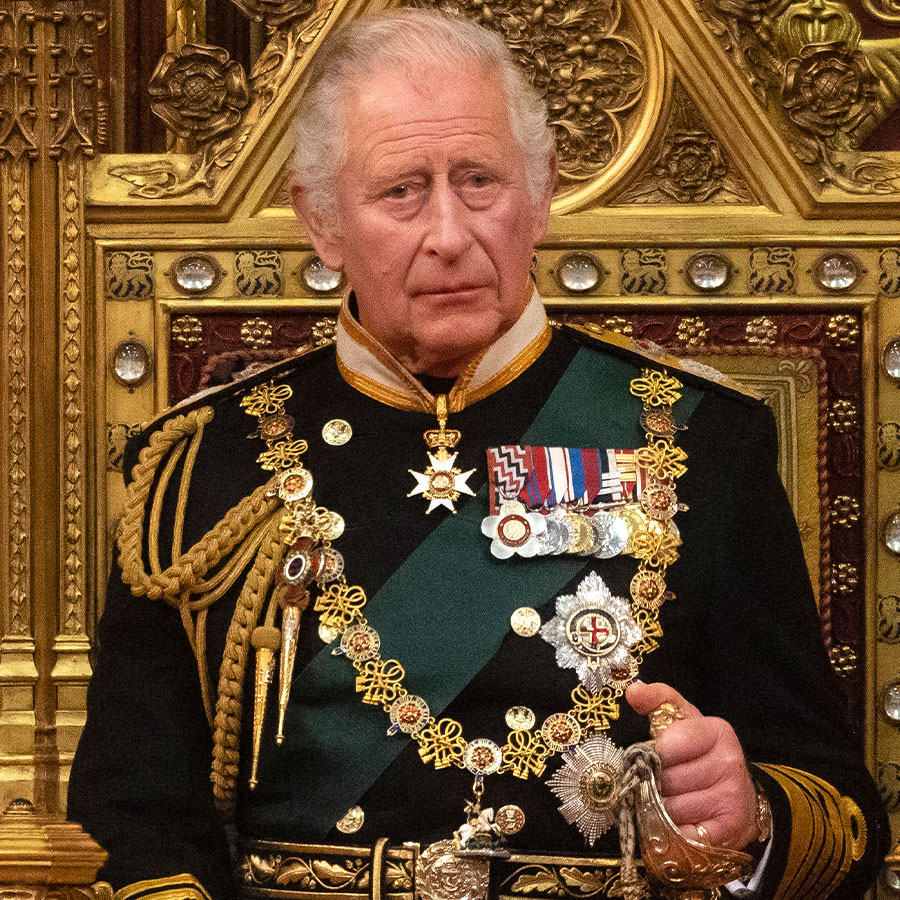 Charles, then-Prince of Wales sits by the Imperial State Crown as he delivers the Queen’s Speech during the state opening of Parliament at the House of Lords on May 10, 2022. Almost four months to the day later, the Queen passed away and Charles became King. Photo: Dan Kitwood/Getty Images

The image of King Charles III being driven away after the Committal Service for Queen Elizabeth II at St. George’s Chapel on Monday, with Queen Consort Camilla by his side in the back of the sovereign’s Bentley State Limousine, was poignant.

After a very long, emotional day of mourning his mother in public — cameras catching him solemnly watch as the Crown Jewels were removed from her coffin, and a tear running down his face as God Save the King was played — he must have been exhausted. It has been 11 days of frenetic and urgent activity for the new King, aged 73: greeting the public, long processional walks behind the Queen’s coffin with his siblings, addressing parliament and taping statements for television, receiving foreign dignitaries and holding audiences, and travelling some 3,000 kilometres back and forth around the United Kingdom, all in an effort to bond with his subjects and shore up support for his reign.

By the numbers, it paid off. In recent years, YouGov has found that roughly a third of Britons thought the then-Prince Charles would make a good King. After the Queen’s death, and seeing him in action, that same polling firm found that 63 per cent thought he was going to be a good King. Even more importantly, 73 per cent approved of the job he has done thus far and 94 per cent thought he had nailed his first speech, which aired the morning after the Queen’s death and after he had arrived back in London with crowds to greet him at the gates.

Charles has thrown himself with vigour into the role he has waited a lifetime to fill. But how will his age prove a factor going forward? After all, he is, at 73, the age when most of us are slowing down our lives, rather than kicking into such a high gear.

There are a number of pressing problems for him to address, of course, and that must be motivating. He will likely hope that the experience of mourning the Queen in such a dramatic fashion — the pomp, the circumstance, the horses and soldiers and the queue (featuring David Beckham) and the bereft corgies and the Queen’s lone pony, Emma, who watched from the sidelines — will have drawn not only the nation and the Commonwealth together but his own squabbling sons (and helped retire his troublesome middle brother).

There is an austerity crisis in process in post-Brexit, post-pandemic Britain. Calls for republicanism at home and abroad, as well as uproar over the new King’s past charity scandals and vast, tax-free inheritance, must weigh on him, as well as the spectre of that upcoming tell-all book from his California-based son, Harry.

At 73, Charles is the oldest monarch to take to the throne. Physically, he appears in quite good shape: he managed the long walks behind the Queen’s coffin this past week seemingly with ease; his siblings, in particular Anne, the Princess Royal, at 72, in the heavy boots of her uniform, all looked equally spry, with Andrew, aged 62, and Edward, aged 58. Good genes and longevity run in the family, with their father living to the of age 99, the Queen to 96 and, in particular, the Queen Mum to 101.

The Queen was able to alter her schedule slowly over the years, winding down after the pandemic and loss of her husband and onset of mobility issues as she delegated more and more to her heir and other senior working royals. Still, in 2018, when she was 92, she completed 283 engagements. Sharp ’til the end, indeed receiving the new British prime minister a shocking two days before her death, the Queen worked hard her entire seven-decade reign. It is a more than full-time commitment, with responsibilities fixed in the calendar annually, or years in advance.

We saw the Queen as eternally young, somehow. Perhaps it is the existence of so many portraits, newsreels, film and television depictions of the Queen as a young princess, a young wife and a young mother. She existed as both young and old at the same time, all mixed up in our consciousness. She was never anyone’s kind of “little old lady,” always whip smart and ready with a quick quip.

Charles, by contrast, enjoyed a long bachelorhood as quite the playboy around town and then settled into middle age and beyond in his heir-in-waiting role. He wasn’t the main guy owed the immediate deference of a sovereign, and was still subject to the slings and arrows of tabloid and public fun making. Will the crown on his head change all that? And more importantly, will it change him?

We had only a few small glitches in the incredibly smooth, complex Operation London Bridge, which shows what large teams can accomplish, polishing up mourning plans over some 60 years (plans for the Queen’s state funeral began in earnest in the early 1960s). But aside from small quibbles involving the two newly non-working senior royals, Harry and Andrew, Charles made two (very minor) own-goal gaffes. Strangely, both involved pens. Repeating the details now on the day after his mother’s funeral seems unfair. They were just minor moments of pen rage.

But perhaps they signal something else: will Charles have a learning curve to adapt to the throne? Has his many decades-long gig as Prince of Wales — a hard-working role to be sure, as he undertook more than 500 engagements each in 2018 and 2019 himself — left him temperamentally unsuited to the Crown?

His mother, after all, never showed her emotions. She likely would have risen above pesky pen placement or make a clever joke about leaking ink. Never complain, never explain. And though Charles has settled in with gravitas in recent years, emulating his mother so much more than when he was off giving retaliatory interviews to Jonathan Dimbleby, he still retains a bit of a flare factor. He doesn’t have the same total mastery over his emotions as his predecessor.

Charles will also have to learn to curb his penchant for expressing his political views and conform to the tradition of complete neutrality. Sure, the Queen advised her prime ministers, and taught diplomats from around the world the ropes. But she was careful never to be seen to interfere. Charles has been sending memos to MPs for decades and campaigned openly for causes he is passionate about. Nearly the first words out of his mouth as King were that he intended to put all that behind him.

He also said, in that first speech, he was dedicating “what remains to me of my life,” to “the heavy task that has been laid upon me.”

It was an open acceptance of the fact that, mathematically, his cannot be a long reign. But it could still be transformative. Fresh off the highs and lows of a jubilee year and a funeral, where all the visual spectacle and star power of the monarchy has been put to use to draw the country together around the institution, King Charles has a good tail wind behind him.

The coronation is yet to come, though it will come with concerns about the record spending of this past year, amid a winter where the heating oil crisis is set to be crippling for many average Britons (and the rest of his subjects, like us, an ocean away). Let’s hope King Charles III can be an example of what great things can be done in the eighth decade of life, just as his mother provided inspiration in aging with verve and vigour before him.

Charles III and the Future of the U.K. Monarchy: Looking Abroad for Clues