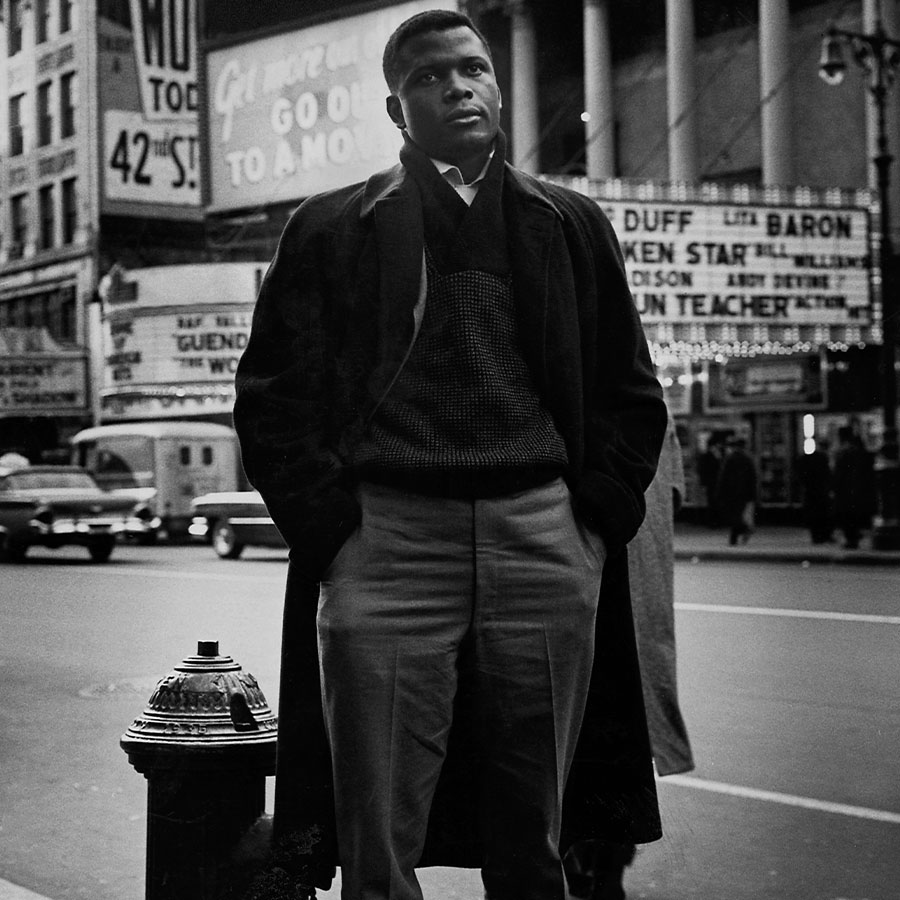 Sidney Poitier outside the Apollo Theatre in New York in 1959. Photo: Courtesy of AppleTV+

It’s remarkable that no one beat director Reginald Hudlin to the finish line in making a documentary about Sidney Poitier, given the charismatic late actor’s towering achievements, not just in Hollywood but also in the American civil rights arena.

And yet Sidney — Hudlin’s tenderly observed, family-approved portrait of Poitier, currently airing on AppleTV+ after making its world première at the Toronto International Film Festival — is the first proper cinematic chronicle of the Bahamian-born actor, who rose to become the first Black man to win an Oscar and, most significantly, the first Black actor to demand complex, leading-man roles.

Produced by Oprah Winfrey and featuring anecdotes and observations from marquee commentators including Winfrey, Denzel Washington, Halle Berry, Robert Redford, Lenny Kravitz, Barbra Streisand, Spike Lee, Morgan Freeman, Poitier’s first wife, Juanita Hardy, and all six of the actor’s daughters from two marriages, Sidney locates a man that tore up the floorboards of the Hollywood establishment without once losing his cool.

Indeed, as the highly watchable, archive-rich Sidney shows, Poitier was, if not unflappable, very much in control of his actions and fully aware that he was representing not just himself but also virtually every other Black actor before or since. Huge responsibility, sure, but Hudlin’s film makes clear that Poitier was uniquely tasked for the job. (Read a full review of Sidney here).

Zoomer recently spoke to Hudlin, 60, at home in Los Angeles, about his film, which was narrated by the actor himself prior to his death last January at age 94 and which serves as a dazzling testament to his life and legacy.

KIM HUGHES: How hard was it to resist naming your film, ‘Sidney Poitier: Classiest Human Being Ever?’

REGINALD HUDLIN: (Laughs.) There were lots of possible titles along those same lines, such as ‘Sidney Poitier: Why Can’t I Be You.’ The name was tricky, but we decided on Sidney because it implied a level of intimacy. Everyone thinks they know Sidney, but he was a bunch of things you may not know.

KH: What was the hardest thing to get right with this film?

RH: When a guy has lived as long as he did, and every year of his life was consequential, it was hard to know the organizing principle. What do you leave in and take out? I mean, his life was consequential literally from birth, in which he defeated death. (Poitier was born two months premature and was not expected to live.) He continued to make history and do the impossible almost every year of his life as a filmmaker, as an activist. The goal was, ‘Who is the man, Sidney Poitier?’

KH: What was the most surprising thing you discovered about your subject?

RH: We could not find an interview with his first wife, Juanita Hardy. Not anywhere. When she finally agreed to sit down and talk with us, she was a revelation. Her business advice, the fact that she was a Black woman going to Columbia University — which was an amazing achievement in itself — and she marries this up-and-coming actor who only acquired literacy as an adult … all that is an amazing story.

KH: I imagine some of the stories gathered in this film were being told for the very first time. Some of your favourites?

RH: When Barbra Streisand talks about meeting Sidney Poitier, Harry Belafonte, and Marlon Brando all on the same night. That’s a big night! When Juanita told the story of trading in her fur coat to invest in ‘A Raisin in the Sun’, that’s a big applause line at every screening we’ve had. It’s the classic, “behind every great man is a great woman” adage. Sidney was surrounded by amazing women: his mother, his wives, his daughters. And all his daughters are so smart and articulate but with their own perspective on their father. It was great to speak with all of them because they paint a complete picture.

KH: You mention Barbra Streisand, who was a rare get. Ditto Robert Redford. Did having Oprah Winfrey on board as producer facilitate that access?

RH: The key was the subject. Barbra is proud of her connection to Sidney, quite effusive about it, and she had a lot to say. (Along with Paul Newman, Dustin Hoffman, and Steve McQueen, Streisand and Poitier formed production company First Artists, which operated from 1969 to 1980 and allowed the stars greater creative control over projects). Same with Robert Redford. Obviously, Oprah is amazing and was invaluable to getting the film made. But at the end of the day, it was all about Sidney.

KH: What state of completion was the film at when Sidney Poitier died last January?

RH: About 90 per cent done with production. It was obviously very disappointing to know he would never see the film. But we felt confident that we were making the right film.

KH: Do you think a Sidney Poitier born in 1967 or 1977 would have found the same successes as the one born in 1927? Did the challenges he faced galvanize him?

RH: From its inception, the movie business promoted this racist imagery of Black people. Here comes this man who is built to take it all on and single-handedly smash through all this terrible imagery by being who he is: intelligent, arrogant, courageous, and with this integrity and moral compass. Would he have been the same man had he been born years later? Hard to say. Does the man make the times or do the times make the man? One thing is certain: he so changed the times that it’s hard to imagine what entertainment would be without Sidney in the moment he lived in.

KH: Who would you most loved to have interviewed for this film but couldn’t?

RH: Rod Steiger (who starred opposite Poitier in Norman Jewison’s groundbreaking 1967 film, In the Heat of the Night). Tony Curtis (1958’s The Defiant Ones). (Musician and activist) Paul Robeson. I’d have loved to talk to them, which underlines the urgency of telling stories like this. You have to get them done while the right voices are here to tell the story.

KH: What will success look like for you with this film?

RH: We showed the film here in Los Angeles for the first time Wednesday. The audience was packed with people who were friends with Sidney Poitier. Their reaction meant a lot. I mean, we knew the family had embraced the film, which was the most important thing. But some of those friends of Sidney’s are also friends of mine … so I was a little nervous. But what I heard was, ‘Wow, you got him! That’s exactly who he was.’ Some people might watch this and go, ‘He’s too good to be true.’ But that’s the point. He was that good of a man.