The Big 5-0 Glow: Lifestyle Guru Gwyneth Paltrow On Her Journey of Aging, Plus Her Provocative Birthday Shots 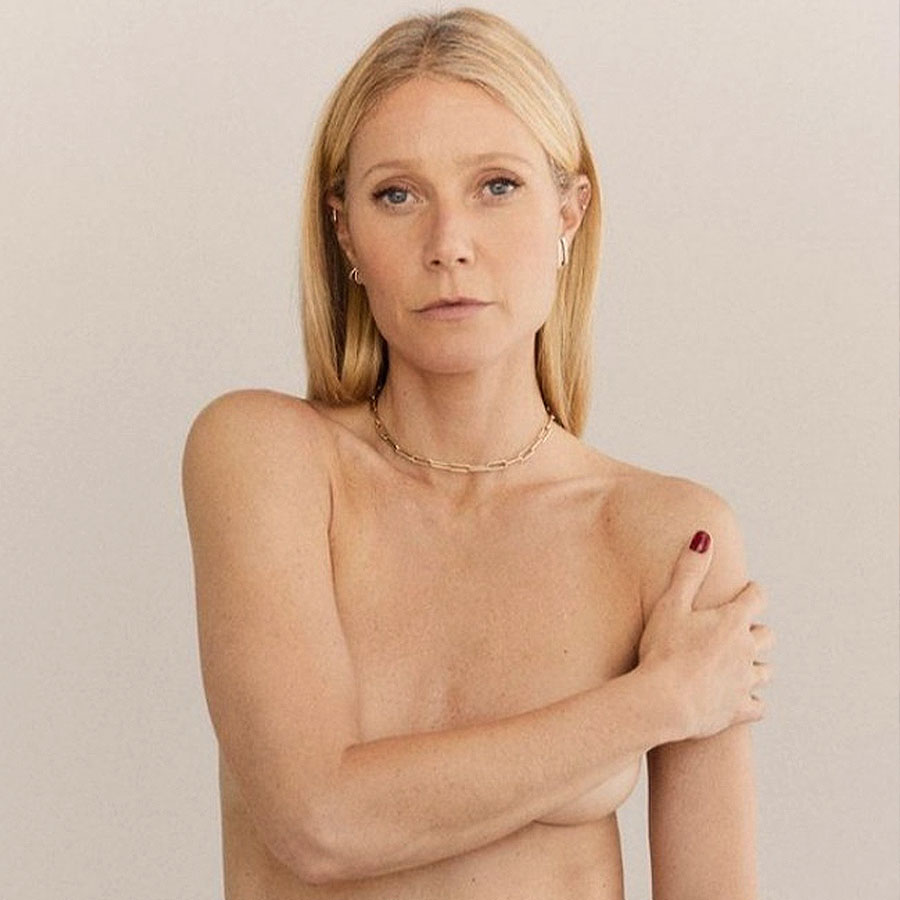 The founder of Goop marked her milestone birthday by stripping down to her birthday suit. Photo: Reuters

It Girl, Oscar Winner, Wellness Mogul, Conscious Uncoupler, Vagina-Candle Maker, Lifestyle Guru, Gwyneth Paltrow has proved more of an iconoclast and enigma than the average Hollywood celebrity. Today, she’s a woman turning 50, musing on what that means with a powerful essay on the passing of time, perspective and priorities — and several provocative birthday shots, including one where she posed nude, wearing gold body paint.

To celebrate a key milestone — her 50 birthday — Gwyneth Paltrow took to Instagram, posting a black and white photo of herself in a string bikini, gleefully leaping into the air. While bathing suit birthday snaps have become something of a rite of passage for a 50-something celebrity, Paltrow’s was accompanied by a thoughtful 1,500-word essay. One that began by looking back at her parents’ 50ths — both of which had “seemed like a reckoning”; her mother’s joyous, her father’s anxious — before contemplating her own growing self-acceptance and outlook on the future.

Her perspective had been “replaced with an awareness that is hard to define. An awareness that lives somewhere between the physical chapters of my life, the data points of what I did and where I was, and the energy of the life itself.” And yet, she “strangely had no sense of time passed. I am as connected to this feeling of longing, of promise … as I was 30 years ago … But there is something about the sweetness of life that exists deep within me that is unchanged, that will not change. It is the essence of the essence. It seems to be getting sweeter.”

Still flush with optimism and expectation, her “essence” unchanged, Paltrow was quick to concede the physical realities. Viewing her body, one she’d begun to take pride in as proof of a life well lived, as “a map of the evidence of all the days … a collection of marks and irregularities that dog-ear the chapters. Scarred from oven burns, a finger smashed in a window long ago, the birth of a child. Silver hair and fine lines.”

The introspective mood saw her waxing (perhaps too) poetically that, “the sun has left her celestial fingerprints all over me, as if she soaked a brush in dark-taupe watercolor, flecking it over my skin,” while not leaping on the sterling opportunity to embed a slew of youthifying Goop products into the dispatch. No shilling of Goop All-in-One Super Nutrient Face Oil to cheapen Paltrow’s reflections on the passage of time. Instead, she’d come up with a mantra to swat away the “reckless thoughts” that can unsettle her. “I accept. I accept the marks and the loosening skin, the wrinkles. I accept my body and let go of the need to be perfect, look perfect, defy gravity, defy logic, defy humanity. I accept my humanity.”

Though, admittedly, Paltrow’s corporal “humanity” is looking better than most. She received the predictable social media snark for “accepting” her perfectly toned birthday body — but she’s also earned it. “I feel really lucky that I have my health and strength in my body,” she remarked in an August Goop post in the run up to her 50th. “Many of the decisions I made in my late 20s, my 30s, and my 40s, are paying dividends now. The effort you put in now doesn’t necessarily yield the results it did 10 years ago, in terms of working out” she conceded, but she was grateful for “the foundation” she had built over the years and underscored the importance of having “some grace around the aging of your body, to be forgiving.” Skin and muscle won’t bounce back the way it used to, she noted, and that’s fine. “You have to recalibrate. Staying healthy takes a little more intentionality.”

Having famously worked her way through macrobiotics, vegan, Spanish cookery with Mario Batali, quinoa whiskey and more, Paltrow’s current ”clean diet” is Paleo. “Last year, I cut down on alcohol and focused on lowering inflammation,” she highlighted on Goop. “What’s turned out to be best for me is paleo, so I’m grain-free, sugar-free, eating lots of vegetables and clean protein. Lots of fish, lots of olive oil.”

Whatever she’s doing, it’s working. Just a couple of days after the bikini shot, Paltrow swapped the bikini for body paint. “All I know is that they’re painting me gold and that I have to be naked,” Paltrow explained. And really, what better way to commemorate your Golden Jubilee? “I feel so good turning 50, and this is about expressing that sense of energy and optimism that I’m experiencing.”

Child of Hollywood, coltish California blond, ‘It’ girl to Oscar-winning actress to lifestyle guru, Paltrow’s chameleon-like quality — her ability to capture a certain glossily West Coast version of the female zeitgeist, decade to decade — can remind one of a next-gen Jane Fonda. Minus the political activism, Paltrow shares the same guileless knack for reflecting her own journey as Aspirational Way of Life to an audience of eager fans that’s keen to adopt her ever-evolving procession of ardent enthusiasms. In the last decade, Paltrow has galloped though healthy eating and wellness, yoga, energy healers, alternative medicine, motherhood, divorce and modern family, haute boho design, a signature fashion line, sex and intimacy, self-care and endless new-age escapades.

Love her or hate her, Paltrow’s authentic in her fixations, gluten-free eating to conscious uncoupling, you never get the feeling she’s selling you something that she isn’t deeply committed to herself. Now cresting middle age, a famous beauty who owns her vanity yet gracefully accepts the march of time, Paltrow is perched atop her Goop empire ready to share her third act with the same open-minded curiosity and irreverence as she explores this new phase of life.

“On some level culturally, we’ve totally redefined what 50 is for people, both internally and externally. I think of J.Lo — she looks the best she ever has,” Paltrow pointed out in her post. “For so many women I know, this is the best time so far, the peak time of their lives. So, I’m happy at this big birthday … Aging is a journey to knowing your actual self. It’s learning to fully embrace who you really are … What I’ve learned from my mom is that a life full of meaning and art and music and people you love is the way to age beautifully.”