‘The Crown’: Netflix Releases New Photos of the Queen, Charles and Diana, and Others From the Upcoming Fifth Season 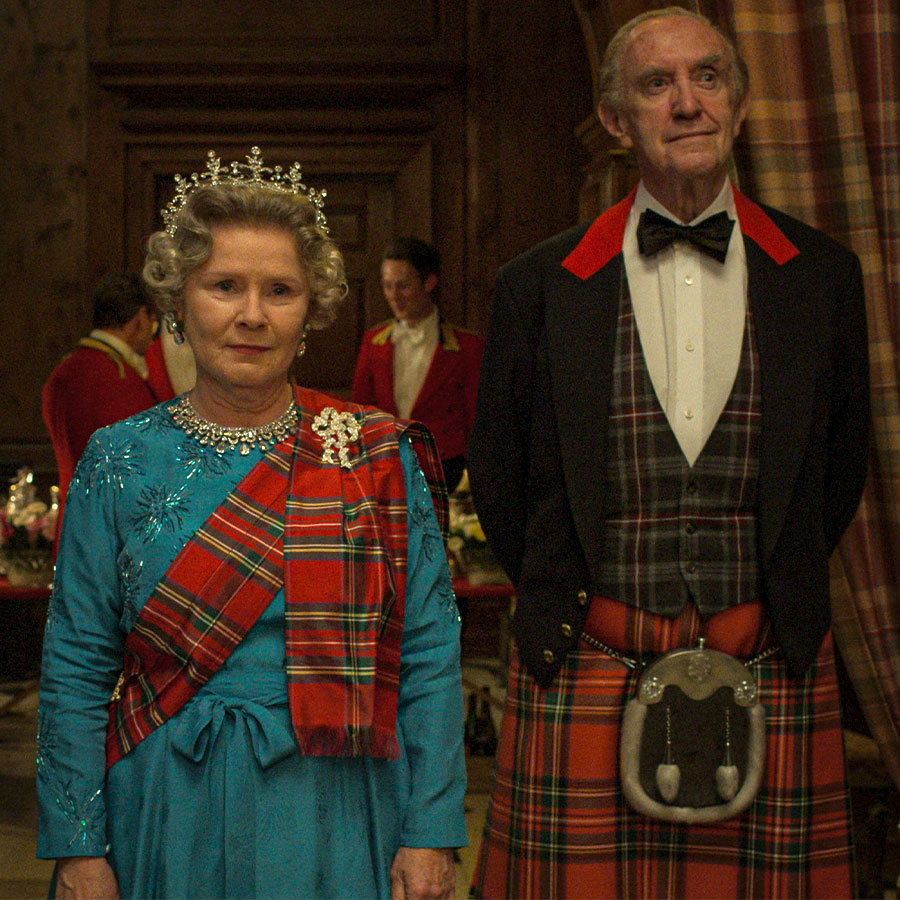 Imelda Staunton as Queen Elizabeth II and Jonathan Pryce as Prince Philip in Season 5 of 'The Crown.' Photo: Courtesy of Netflix

Netflix released a set of first-look images on Friday from the highly anticipated upcoming fifth season of The Crown, giving fans a glimpse of the Royal Family and other notable names.

This latest season of the award-winning series focuses on the tumultuous era of the ’90s — a time when the Queen and company navigated both palace scandals and a drop in popularity. That includes the very public spilt between Charles and Diana as well as the former Princess of Wales’ tragic 1997 death.

The newly released photos show Imelda Staunton, 66, and Jonathan Pryce, 75, as the Queen and the Duke of Edinburgh, outfitted in tartan (see image above).

Another photo shows Dominic West, 52, and Elizabeth Debicki, 32, as Prince Charles and Diana, Princess of Wales, aboard a boat with their children, Princes Harry (Teddy Hawley) and William (Timothee Sambor).

“I think people understand, because the cast has changed every two seasons, that this is not an imitation,” West told the Netflix site Tadum. “This is an evoking of a character. That’s really where the show lives: in the imagined conversations of their private life.”

Debicki added that, “In the ’90s, everything had started to be filmed, and also it was the birth of the 24-hour news cycle, so there’s just this incredible amount of content that we have access to. Diana was the most photographed person in the world at that time. As an actor, you open the portal and this huge tsunami of information comes at you. I happily swam around in it.”

Another photo, below, shows Debicki as Diana at what is believed to be a Vanity Fair charity dinner at London’s Serpentine Gallery on June 27, 1995.

Manville told Tadum that she watched multiple documentaries and read various books about Princess Margaret’s life. “All the books I read have different people’s versions of events. So you’ve got to let it go in and just sink in, but then you almost forget about it because finally the scripts come and that’s what you work with.”

Meanwhile, Harrison called Princess Anne “an extraordinary character” and added that, “She’s not there to make people feel better about themselves, but she is superb at her job and is a proper feminist. She’s someone we can really look up to, and I think she has no sense of entitlement.”

Jonathan Pryce told Tadum that he was more interested in learning about the personal lives of the royals, “looking into Philip’s background and finding out what made him the man he was.” While Williams, who plays Camilla, noted, “Charles and Camilla seem to have a very healthy sense of humour about what at times must be an unbearable predicament. And that is the thing that I most want to show.”

And Peter Morgan, the show’s creator, said of the portrayal of Prime Minister John Major, “I think Jonny Lee Miller is an absolute triumph in the role and a real surprise.”

Of course, this new Crown cast — which takes over for the final two seasons of the series — has enormous royal shoes to fill, of which they’re surely aware.

For example, every principal performer from the previous four seasons who played the Queen (Claire Foy and Olivia Colman), Prince Philip (Matt Smith and Tobias Menzies), and Princess Margaret (Vanessa Kirby and Helena Bonham Carter) was nominated for, or won, Emmys for their efforts. The same goes for Josh O’Connor (Prince Charles in Season 3 and 4) and Emma Corrin (Princess Diana in Season 4). And that’s not to mention the prime ministers: John Lithgow, as Winston Churchill in the show’s first three seasons, and Gillian Anderson as Margaret Thatcher in the fourth season, both won Emmys for the parts.

To that end, the Queen, as she did in real life, gets the last word.

“What has been nice, and I hope I don’t prove them wrong, is people saying, ‘I’m really looking forward to seeing her as the Queen,’’’ Staunton told Tudum. “So, let’s just hope that works out for them, because I’ve done it. Nothing I can do about it now!”

The fifth season of The Crown premieres on Netflix on Nov. 9.

Balmoral Bound: How The Crown Turned Up the Drama of Real-Life Royal History on the Scottish Estate