Rezoning the Mind: Canadian Architect Gregory Henriquez Brings GHETTO, His Futuristic City-Building Vision, to the AGO 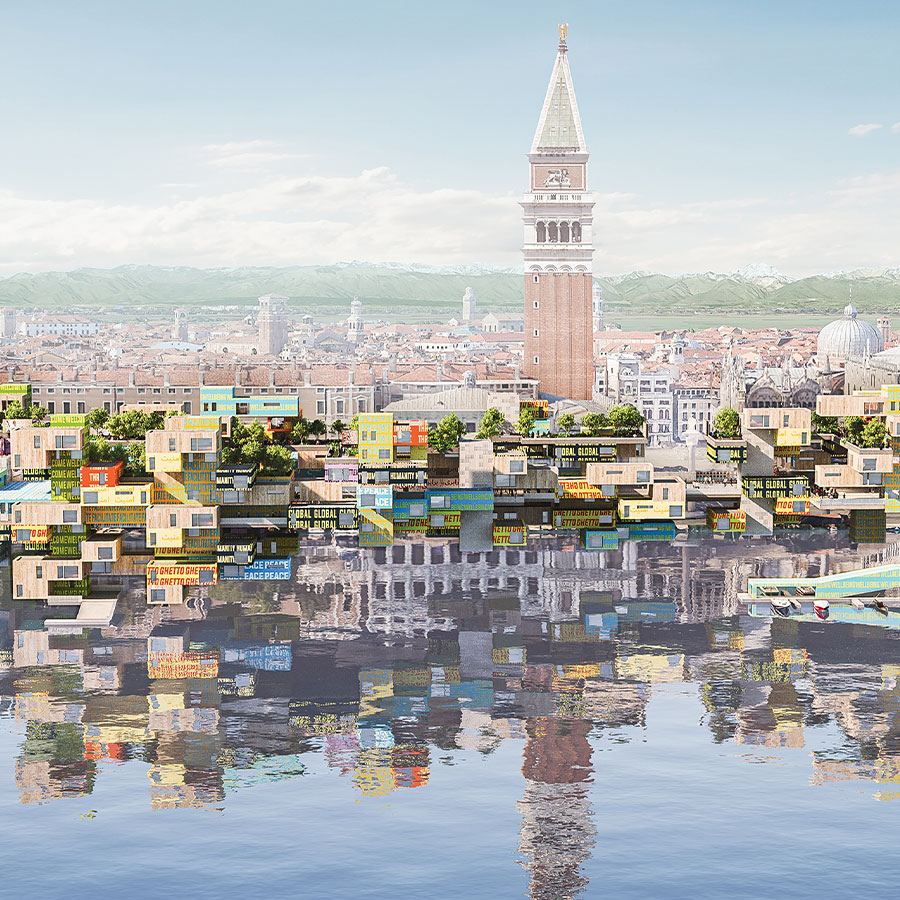 When Gregory Henriquez was growing up in the ’70s in Vancouver’s Oakridge neighbourhood, he was mesmerized by a Toronto-produced Saturday morning cartoon, a space-age take on the classic English tale about an outlaw and his band of Merry Men but set in the year 3000.

“It all begins with Rocket Robin Hood,” Henriquez says about his conceptual proposal called GHETTO: Sanctuary for Sale, an exhibition and graphic novel proposing a visionary scheme for new buildings in Venice, combining housing for refugees with time-share apartments for wealthy tourists. “The GHETTO project is exactly the same idea: a futuristic comic proposing stealing from the cosmic rich to give to the suffering galactic poor.” The son of prominent architect Richard Henriquez, and now managing principal of their firm, Henriquez Partners Architects (HPA), the intense but gracious 59-year-old has built one of the most unusual practices in the country, specializing in complex rezoning negotiations for massive complexes such as the $5-billion-plus Oakridge Park, mere blocks from the duplex where he was raised. His pro bono efforts — pushing out books arguing for community-led “Citizen Cities” and serving as an advocate for the human rights of the poor and homeless — are all financed by designing luxury condominiums that fulfill the financial dreams of some of Canada’s richest developers. As in his GHETTO proposal for Venice, these towers often include some affordable housing within their walls. This creative and social class tension is crucial to how Gregory Henriquez thinks and works.

GHETTO was first shown as part of the 2021 Venice Biennale of Architecture, and the installation will be displayed in the Art Gallery of Ontario’s Annex from Oct. 19 to Nov. 19. The drawings and writings were commissioned by the United Nation’s Refugee Agency and the European Cultural Centre and were first shown in the centre’s space in Palazzo Moro, near the Jewish Quarter in Cannaregio. This was the world’s first legally designated ghetto. “Ghetto comes from the Venetian word for foundry, or ‘gheto,’ which were formerly located in what was then, and remains now, a less fashionable end of the city,” Henriquez explains. The 1516 laws establishing the boundaries of this first ghetto were a response to a refugee crisis, a time when Jews were fleeing the Spanish Inquisition and religious wars and began flooding into Venice.

Crucial to the emotional importance of this proposal to Gregory, the Henriquez family were Jewish refugees expelled from the Iberian Peninsula around the same time, who ended up in Jamaica, where they became planters, and where his father Richard was born. Richard left the palms for the snow piles of Winnipeg to study architecture, followed by graduate work at MIT, a brief stop in Saskatoon to design the Mendel Art Gallery and to get married, and he has had a career based in Vancouver ever since. He is currently compiling a 500-year history of his family, and awaits the release of the documentary Richard Henriquez: Building Stories at design film festivals later this year.

Gregory Henriquez is a vital combination of sophist and entrepreneur, philosopher and hard-nosed city-builder. “I have long-held beliefs in the intersection of justice and beauty, ethics and aesthetics,” he says in a recent interview in HPA’s Georgia Street studios. Henriquez tries to solve many of Venice’s pressing issues with his GHETTO proposal: low-spending cruise-ship and day-tripping tourists clogging its canals and piazzi all summer long; a shortage of service workers and winter residents that threaten its economic lifeblood; and waves of refugees from the Middle East and Africa who have spilled awkwardly into Italy, a country unused to immigrants. His visually linked designs for the Piazza San Marco, the Giardini della Biennale, the train station, and the heart of the former ghetto propose the sale of time-share apartments to wealthy North Americans and Europeans, who could use these bases to have longer and deeper experiences of “La Serenissima.” Under his “one for one” model, the funds raised from each time-share sale would build one permanent apartment for refugees, providing needed all-year residents and potential service workers — the Robin Hood ethos at work.

The heart of the Henriquez proposal is a detailed pro forma, or financial proposal, indicating a cost of $1.4 billion if constructed for all four sites. “By the scale of contemporary development, that is not such a huge number — our Oakridge Park now being built is nearly four times that size.” Henriquez says his may well be the first pro forma ever displayed in a Venice Biennale, but that may say more about top architects avoiding financial reality than his personal vision for how to make things work.

Untangling urban messes is a Henriquez specialty, expressed in his design for the Woodward’s redevelopment of Vancouver’s Downtown Eastside. It combines a private luxury condo tower, premises for Simon Fraser University’s School for the Contemporary Arts, affordable multi-bedroom family housing, offices for community organizations and a wing serving those with severe addiction and mental-health problems, all combined into one near-city-block-sized package. The Woodward’s architecture is at best serviceable, but its pro forma — a utopian financial package that uses private development to mix diverse citizens and solve deep problems — is one of the most brilliant documents in recent Canadian city building.

Henriquez looks forward to next year’s opening of Mirvish Village in Toronto, another project with Vancouver’s Westbank Corp. (the same developer with Woodward’s and Oakridge Park), a retail-rental housing development on the site of Honest Ed’s gigantic bargain emporium. There is a streak of the utopian here, too — when it was first conceived nearly 10 years ago, it was the first large, all-rental new residential complex proposed for downtown Toronto in decades. It preserves nearly all the historic houses on the site, includes a micro-retail “Honest Ed’s Alley” for emerging, mainly immigrant, small retailers, and the unusual variety of its pre-cast concrete detailing ensures it fits into the dynamic corner of Bloor and Bathurst streets.

Henriquez is convinced Venice’s social differences and financial challenges can be breached, which is most evident in GHETTO’s graphic novel, illustrated by Canadian artist Wei Li, about the intertwined lives of Iranian refugees and American time-share visitors. A graphic trope used in illustrations is essential to his focus on this idea, not the architectural means to achieve it. “It is not designed to be built,” he says of the forms shown in his drawings. “They are intended to be taken conceptually, not literally.”

Henriquez is clear his architectural forms are an intended riff on Moshe Safdie’s Habitat 67, which was constructed for Expo 67 and still stands on Montreal’s waterfront. Impressed, ever since he visited it as a Carleton architecture student, he wanted to advance the key principles of Habitat’s maze of boxy pre-cast units with liveable decks and a freeing up of the ground plane, and the Safdie shapes were a means to that end. Linking the Venice proposal with the rest of his work, Henriquez labels the GHETTO project “a re-zoning of the mind.” This is paper architecture — a conceptual proposal raising valid ideas – at its best. As the cartoon theme song proclaims: “Send a joyous shout throughout the land! For Rocket Robin Hood!”

A version this article appeared in the Oct/Nov 2022 issue with the headline “Re-Zoning The Mind,” p. 20.

Edible Art: A Treat for the Eye (as Well as the Tongue), That Can Also Convey Deeper Meaning