‘What Ever Happened to Baby Jane?’: As the Film Classic Turns 60, Exploring the History of Hagsploitation Films 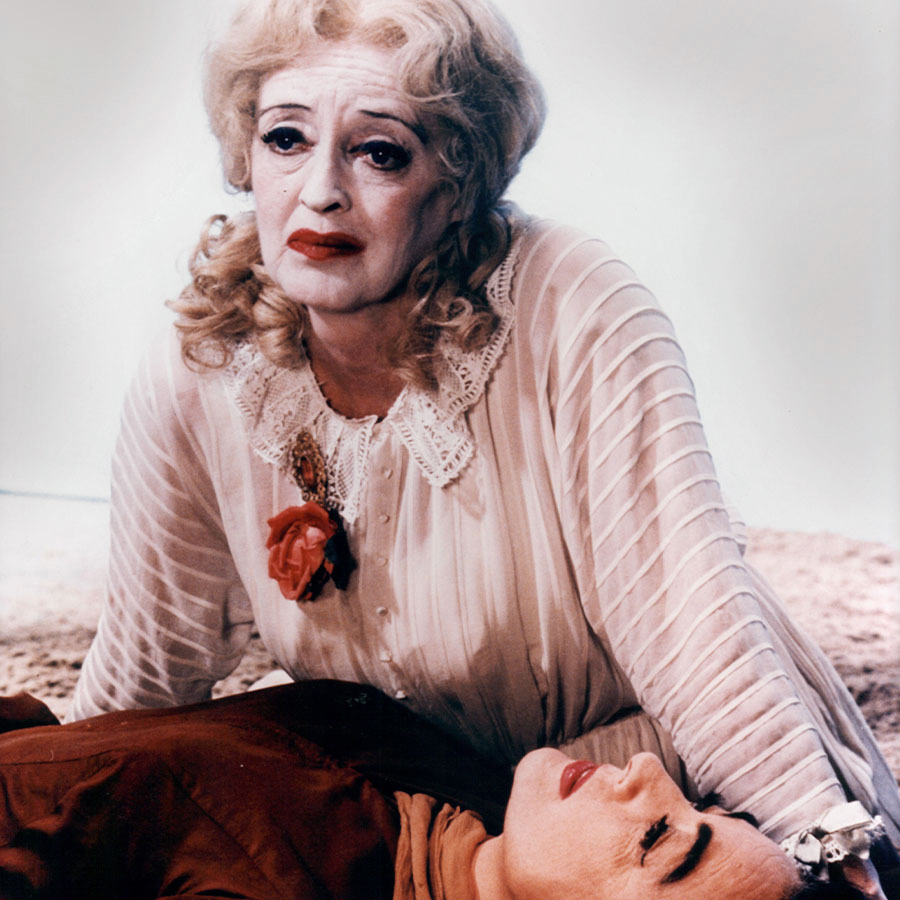 Bette Davis and Joan Crawford on the beach in a scene from the film 'What Ever Happened To Baby Jane?' in 1962. Photo: Warner Brothers/Getty Images

It’s no coincidence that What Ever Happened to Baby Jane? originally came out in cinemas on October 31 — Halloween — 1962.

The now-classic horror thriller, adapted by director Robert Aldrich from Henry Farrell’s 1960 novel of the same name, stars Bette Davis as “Baby” Jane Hudson, an aging child star who cares for her sister Blanche (Joan Crawford), also a former actress, who now uses a wheelchair after a crippling car accident. In monstrous makeup the pair of jealous has-beens rattle around their old Hollywood mansion bickering and tormenting one another.

The 1962 New York Times review of the film called the pair “formidable freaks” when their high camp creep show was released at Halloween. Because what could possibly be scarier than childless older women who’ve gone to seed?

The movie not only gifted posterity with the oddly matter-of-fact song-and-dance number Davis gamely performed during its publicity tour — as she memorably did in this clip from The Andy Williams Show. Within months of its release the movie had also generated a drag parody and it has since been absorbed into pop culture, from French & Saunders spoof sketches to fashion portraits by Tim Walker, who posed starlet Scarlett Johansson (herself a former child actor) as Baby Jane.

“Baby Jane is the very definition of camp,” culture critic Caroline Young says over the phone from her home in the Scottish Borders. But the groundwork for the genre known as “hag horror” — defined as featuring “a formerly-glamorous older woman who has become mentally unbalanced and terrorizes those around her” — was actually laid during classic Hollywood’s heyday by Billy Wilder with his 1950 drama about a delusional aging star, Sunset Boulevard.

“Because Norma Desmond [Gloria Swanson] is very camp as well — that kind of theatricality is a big part in these depictions of these older women. The characters in these films are often, typically, lamenting the loss of their looks, and this idea as they get older, looking in the mirror horrified at what they see — the loss of what they had.”

That’s the case even with Davis, who herself insisted she was more of a character actress than a celebrity in contrast to the more glamorous Crawford, who maintained a disciplined health and beauty routine until the last. The actresses’ larger than life characters and personalities played off their bygone image for both the on-screen psychological warfare and the off-screen drama, in which art imitated their real-life rivalry at ages 54 and 56, respectively. The behind-the-scenes story was depicted in Ryan Murphy’s Feud: Bette and Joan mini-series and adds another delicious dimension to the 1962 classic.

Demented women populated director Aldrich’s own Baby Jane follow-up film, Hush, Hush…Sweet Charlotte, in 1964, this time pairing Davis with Olivia de Havilland. And these were swiftly followed by a slew of imitators.

Arguably, part of the fun for audiences watching those films back in the 1960s and 1970s was to see these well-known, once-glamorous stars and esteemed character actors debasing themselves.

Using Baby Jane as her starting point, Young unpacks the rise, fall, and rise again of the sub-genre of gothic horror — hagsploitation films — that the Aldrich movie launched in her new book Crazy Old Ladies (out now from Bear Manor Media). She was inspired to consider the legacy of Baby Jane during the recent spate of biopics (like Judy and Film Stars Don’t Die in Liverpool) about late-career, golden age Hollywood actresses and the gigs they took in the 1960s and 1970s in order to make a living. Regional theatre, gruelling concert tours, and for some — like Crawford and Davis, but also Barbara Stanwyck, Shelley Winters and Joan Fontaine — it was cheap horror movies. It’s the same patriarchal anxiety around women, witches, and hysteria explored in In Defense of Witches, a thought-provoking history that’s in my latest round-up of spooky season reads for Zed: The Zoomer Book Club. And it puts the sub-genre featuring menopausal maniacs and psycho-biddies in the same category as the era’s groundbeaking Rosemary’s Baby, The Witches, and The Exorcist because they, too, illustrate the fears of the time — the worry surrounding feminism and women who deviated from traditional roles.

“As the feminist movement gained ground in the sixties,” Young says, “and women were being given agency over their reproduction rights with the advent of the pill, the concept of the independent woman was becoming a threat to the patriarchy.”

You can also find it in the queer-fear lesbian subtext of Mrs. Danvers types — like Kristen Scott Thomas playing the obsessive housekeeper in the recent Rebecca. “By depicting older women in horror films who were mentally disturbed and scarred by the lost opportunities in life, they served as a warning to others to keep to their assigned gender roles.”

Davis’s Baby Jane sits at #44 on the American Film Institute’s list of the 50 Best Villains of American Cinema because the role embodies society’s perceptions around women (especially single ones who deviated from the norm) as they got older and served as a cautionary tale at the time and — to some degree — today.

After the horror trend shifted in the later 1970s to nubile young women in slasher movies like Halloween — which has come full circle with Jamie Lee Curtis, now 63, aging along with the franchise that finished with this year’s Halloween Ends — the horror hag and dangerous spinster evolved into the career woman. There are those two poles again, always to do with fertility and the so-called ‘natural’ maternal nature thwarted in some way.

By the 1990s, Young says, it’s the woman who doesn’t have a child, is ambivalent about motherhood, or doesn’t get married that becomes vilified: she rhymes off The Hand that Rocks the Cradle and Misery as just two examples.

With a new wave of conservatism rising in North America around reproductive freedom and abortion rights, “perhaps it means we’ll be seeing more of these films again that scare women with the repercussions of going against the grain.” She points out that when Mia Farrow pops up in the new television series The Watcher (on Netflix), she’s playing a creepy old lady, and that Diana Rigg’s final role was playing the creepy boarding house owner in Last Night in Soho.

I considered this as I revisited “Frail, Frumpy, and Forgotten,” the first global study conducted for the Geena Davis Institute on Gender in Media on movie roles of “women of age.” The study looked at representations of older adults in the top-grossing films of 2019 in Germany, France, the UK and the US — with a specific focus on women aged 50 and up. It found there weren’t any women over 50 cast in leading roles in 2019’s top films, while two men over 50 were featured as leads. And when older women did appear, they were cast stereotypically.

Men of a certain age, on the other hand, are still sexualized within the parameters of growing older no thanks to the double-standard that, however cantankerous their characters (like Jason Slattery in the recent Confess, Fletch) deems them silver foxes, while often relegating women to joyless hag status. Think: the embittered crone in Great Expectations, vengeful because she was jilted at the altar in her youth, was written by Charles Dickens as — wait for it! — all of 40 years old.

Granted, the study was a few years ago and, on the small screen, we’ve since had the formidable shopping network CEO on I Love That For You played with equal parts vulnerability and scenery-chewing bravado by Jenifer Lewis, 65; 68-year-old Catherine O’Hara’s epic, Emmy-winning turn in Schitt’s Creek; the ongoing misadventures of Jennifer Coolidge, 61, in The White Lotus; or — my personal favourite — Greta Scacchi, 62, with Bryan Brown in the Australian buddy mystery series Darby & Joan.

“There’s generally more scope in television,” Young suggests. “Gritty detective dramas are often a place for older women — like Vera, the older characters who are wise. I think because with British television we’ve always had the soap operas that are much more realistic, too, with downtrodden older characters.”

But the trope is far from eradicated — think Octavia Spencer as a malevolent maternal figure in the 2019 film Ma.

“Just as the films of the 60s and 70s represented the cultural clash between the older generation and the countercultural youth who bitterly protested the Vietnam War and fought for Civil Rights and Women’s Liberation,” as Young writes in Crazy Old Ladies, “today’s battle is between the Baby Boomers and Generation Z, who find each other’s cultural and political stances perplexing.”

Trick or Treat: From Creepy Cocktails to Murder Mysteries, 5 Ways for Grown-ups to Celebrate Halloween

Cult Anniversaries: How ‘It’s a Wonderful Life’ and ‘Scream’ Rejuvenated Their Respective Genres