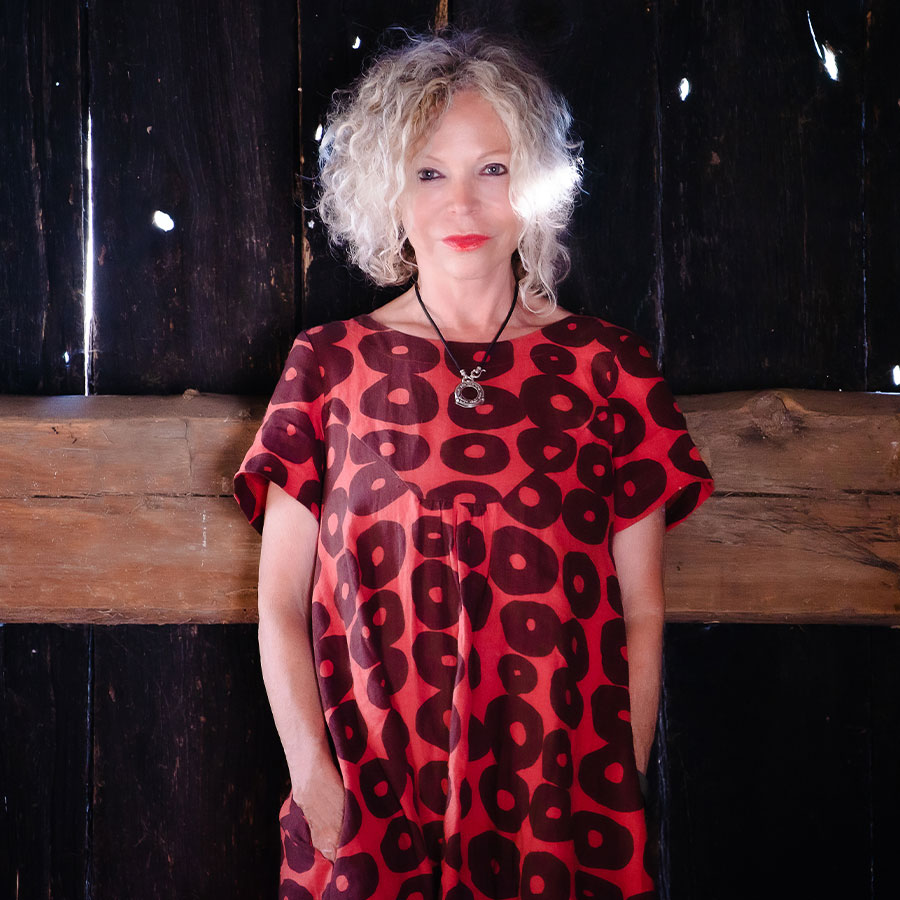 Canadian composer Lenka Lichtenberg (pictured above) says her newest album, a collection of her late grandmother's wartime poetry written during her internment at a Nazi concentration camp, has fostered a deeper connection with her. Photo: Bo Huang

When Lenka Lichtenberg stumbled upon a pair of notebooks full of poems her grandmother had written during the Second World War while imprisoned at Theresienstadt, a Nazi concentration camp in what was then Czechoslovakia, she knew the powerful words that had remained hidden for over 70 years needed a voice.

Lichtenberg, a Czech Canadian musician, composer and producer, made the discovery while searching for documents in her mother’s desk drawer soon after her death in 2016. She debated handing the works over to a Jewish museum, but ultimately decided it wasn’t quite the right place for them.

“I felt that would be a shame because it would be just another thing sitting behind glass and it would not have any life,” she explained in a recent interview with Zoomer. “It would be seen, but it wouldn’t really speak to anyone in any form.”

Instead, she set her sights on honouring the work of her late grandmother Anna Hana Friesová — who passed away in 1987 — the only way she knew how: through music. After selecting eight of the poems to compose herself, she brought in an all-female group of composers — five Canadian and one Czech — to tackle the remaining eight.

“I wanted to have as many female voices as possible,” Lichtenberg explains. “It’s that kind of voice so I felt other women [would] sense that and interpret it in their own way, with their own perspectives.”

The result is the recently released, Thieves of Dreams: Songs of Theresienstadt’s Secret Poetess, a 16-track album that provides an emotional portrait of Friesová’s harrowing experience inside the walls of the concentration camp, where both her daughter and husband were also imprisoned.

The album features 19 recording artists from Canada, the Czech Republic and Germany, each of who perform the songs in Czech, her grandmother’s native language.

Lichtenberg performed the album — which has earned a pair of Canadian Folk Music award nominations — complete with projected translations at Toronto’s Leah Posluns Theatre on Nov. 10. The performance coincided with Canada’s Holocaust Education Week, which marks the 84th anniversary of Kristallnacht, a day that saw the Nazi regime unleash a series of violent progroms against the Jewish population in Germany and recently occupied territories, including Czechoslovakia.

Theresienstadt, which existed for three-and-a-half years between 1941 and 1945, served as both a ghetto-labour camp and a transit camp for Czech Jews whom the Germans deported to killing centres, concentration camps, and forced-labor camps.

For Friesová the writing was on the wall long before the war. When her daughter was born in 1927, she entered “none” under the religion section of her birth certificate in hopes of protecting her from the anti-Semitism that had taken hold in her homeland of Czechoslovakia and throughout Europe. But despite her foresight, on Christmas Day in 1942, Friesová, her husband and her daughter were taken to the camp.

Getting to Know the Poet

For Lichtenberg, the poems were illuminating on a multitude of levels.

“When I read these poems, I had to really significantly alter and adjust my understanding of her as a person,” she explains. “Suddenly, I’m seeing sides to her that I didn’t know were there.”

She remembers her grandmother as a lighthearted and kind woman and says she never spoke about her time in Theresienstadt, which finally ended on May 8, 1945 when the camp was liberated by the Soviet Red Army.

“Most of us, if we’re lucky enough, have a brief window with our grandparents,” she explains in the liner notes of the album. “That time isn’t typically spent listening to their traumatic stories.”

She adds, of the poems, “This is my only understanding of what she went through.”

Despite her mother, Jana Renée Friesová, releasing her book A Fortress of My Youth, a memoir detailing her time in Theresienstadt, Lichtenberg says she wrote and spoke very little about her grandmother’s experience.

While her grandmother’s poems were far less specific in its descriptions, Lichtenberg contends that they’re just as revealing when married with her family’s tragic story.

“Some of them have just a few words, and they say so much,” she marvels.

A poem titled “I Wanted to Curse You, Bitter Land,” for example, speaks of her family’s feelings of betrayal as they were stripped of the life they built in Czechoslovakia.

Meanwhile, the wounds left by the more blatant betrayals her family experienced during the Nazis’ deadly campaign may very well have been her unfortunate muse for the poem.

While she was inside Theresienstadt, Friesová thought her mother (Lichtenberg’s great-grandmother), Františka Siegerová’s marriage to her second husband, Jan Sieger, a non-Jewish local judge, would keep her safe.

However, in 1944, the pair were anonymously reported to the Nazis for illegally storing food to send to Theresienstadt. As a result, Františka was sent to the gas chambers in Auschwitz and Sieger was arrested and executed.

Feelings of betrayal had taken root in Friesová before she set foot in the camp as well. Her husband, Richard Fries, was arrested by the Gestapo after a co-worker betrayed his confidence, reporting him for making derogatory comments about the Nazis. He would spend six months in prison and return, as Lichtenberg’s mother described him, a broken man.

The issues stemming from Fries’ trauma also crops up in many of Friesová’s works, but Lichtenberg says it’s particularly prominent in a succinct poem she believes her grandmother wrote before they were taken to Theresienstadt. Titled “I Have My Own Grief,” it demonstrates how the persecution they both faced under Nazis occupation chipped away at their relationship.

I have my own grief, but perhaps I can manage to carry yours as well;
and should I collapse under both their weight, I’ll collapse without a sound.

In the album, the four-line poem is combined with a recording of Lichtenberg’s mother pulled from a Czech documentary in which she stands in front of their former home and reads a diary entry describing the day they handed the keys over to the Nazi authorities and were transported to the camp.

“I hope and believe that we will return. Goodbye,” she reads in the final line of the entry.

Lichtenberg says other poems, like “Habit is a Monster,” read like a farewell to her husband, who was executed in a gas chamber in Auschwitz in 1944.

“That one really shows me the despair my grandma felt about their situation and their relationship,” she says of the poem. “It’s so conflated in that moment. You don’t know if she’s crying over their fate or if she’s crying more about the lost love. They’re both in there.”

Lichtenberg says the poems — which she believes her grandmother initially wrote on small scraps of paper and transcribed at a later date — likely served as an escape.

“It was important for her to somehow voice what she felt,” she says, adding that her grandmother, who dabbled in ink drawings, likely was filling a creative need as well. “And also, I think the important part of that would be escape of some sort.”

She adds that the two books of poems contain downright “dreamy” entries, including one that mentions Robinson Crusoe and imagines an exploration of a beautiful island.

“It was a way of getting away, at least in her heart or mind,” she says of the lighter stanzas.

Most surprising, however, is the overarching theme of the collection.

“Despite the fact that they were written, for the most part in horrible conditions, basically on the brink of death, most of them, except for very few exceptions, are about love,” she says.

Meanwhile, her mission of introducing the poetry to a wider audience has fostered a deeper connection with both her mother and grandmother.

“Since I started working on it some three years ago now, I feel like I’ve gotten so close to both my mom and grandma,” Lichtenberg says. “Until three years ago, [my grandmother] really wasn’t a part of my life. I had some sweet little memory of her, but [there] wasn’t huge depths to it.

“I feel like she’s standing right behind me. Both of them now have re-entered my life, and it’s really beautiful.”

Listen to Thieves of Dreams on Spotify and follow along with a full translation in the album’s liner notes.

Never Forgotten: How One Canadian Writer Is Illuminating the Lives of Fallen Second World War Soldiers From His Community