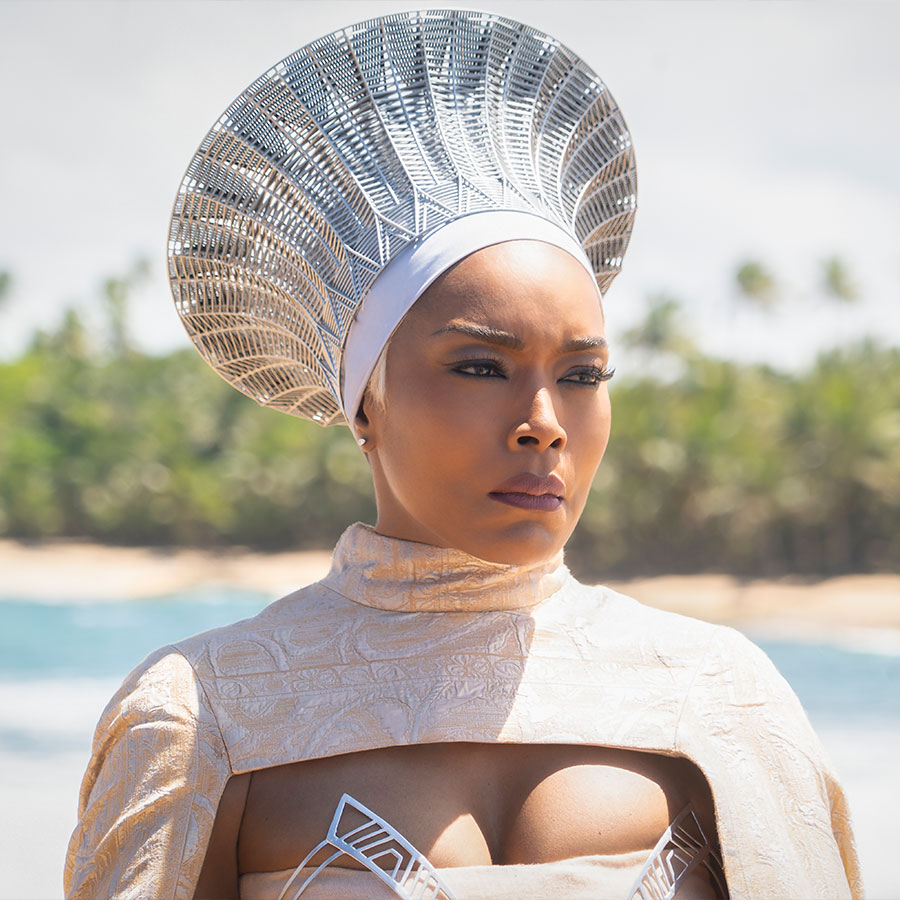 Heavy is the head (and heart) that wears the crown. Such is the burden that Queen Ramonda — played by screen legend Angela Bassett — faces in the wake of King T’Challa’s death in Ryan Coogler’s Black Panther: Wakanda Forever.

The sequel to the blockbuster and historic 2018 film Black Panther — the first ever superhero film to nab a Best Picture Oscar nomination; the first Marvel film to win an Oscar (Best Costume Design, Best Original Score, and Best Production Design); and the first Marvel film to feature a Black cast and director (Coogler) — beautifully and sensitively honours the late Chadwick Boseman, who played the titular superhero (a.k.a. King T’Challa) in the Marvel Cinematic Universe.

Bassett, 64, who played Boseman’s on-screen mother, has to lead Wakanda as Queen Ramonda while grieving the loss of her on-screen son and in reality, her co-star, who died in 2020 at age 43. The film celebrates his legacy while allowing fans and his colleagues to mourn his loss.

Reflecting on her time with the late actor, Bassett recently told Zoomer, “It was an honour being able to work with him. He reminded me that many, many years before, when he was a college student, that he was my (appointed) escort when I visited his campus and received an honorary doctorate from his college. Everyday we’re sitting on set and he has never mentioned this. Well, now we know that Chadwick was a great keeper of detail and secrets. All things with him at the appropriate time and moment.”

Bassett, of course, refers to the fact that Boseman, who passed away in 2020 after a four-year battle with colon cancer, kept his battle a secret from everyone while filming, including his close collaborators, such as Black Panther director Ryan Coogler.

“It was an honour to sit next to him every morning, as he prepared and as I prepared,” Bassett continued. “It was not only about the hair and the makeup. It was about the work for the day, and he just continued to work and to strive to get as close to perfection or to aim for perfection until the moment that Ryan said action.”

As for the sequel, from the very first scene until the end, Black Panther: Wakanda Forever is an homage to Boseman. His presence was definitely felt in this film, Bassett said, calling Boseman their “north star” during the intense and lengthy filming process.

“Even in Wakanda Forever, his presence, his spirit, his ethic, his ethos was right there on that set with us. Because as you can imagine, and as you have seen, this is a humongous undertaking,” she noted. “[It] takes many hours and you see the credit rolls and the many people, long hours and great deal of focus it took. And that’s what he possessed, that great singular focus. So he was our north star in a lot of ways during those months and months and months.”

While the first Black Panther film was about father-son dynamics, this one is very much about motherhood. Bassett is resilient as she ferociously showcases a mother reeling from the devastating loss of her child while having to rule Wakanda in the absence of the King.

The 64-year-old herself is a mother of twin 16-year-olds, whom she shares with husband and actor Courtney B. Vance, and tapped into the emotions of being a mom while balancing her 35-year career.

“I’m so passionate about what I do and love it so much. And of course, this kind of work can take you away from them. But you hope that they will find something that they love doing … a career and an interest that they are as passionate about and that they have that example, to see that it’s not the quantity but the quality of the time that we’re together.

“So you hope all those things are true as you’re mothering and working,” she added with a smile. “It really is an interesting balance. But it all works out in the end, one hopes.”

The role also proved an empowering one for the Oscar and Emmy-nominated actress, who is already being touted as an award season favourite for her role in this film.

“To be queen, to lead, to be that mother for Shuri and for the nation. To have to protect and support our countries and to be smart and strategic, and decisive in the things that must be done. It felt like I wanted to take a little bit of that into my real life, my everyday life, and that would be a blessing.”