‘The Crown’: Season 5 Ushers in Diana, Princess of Wales and the Fine Art of Revenge Dressing 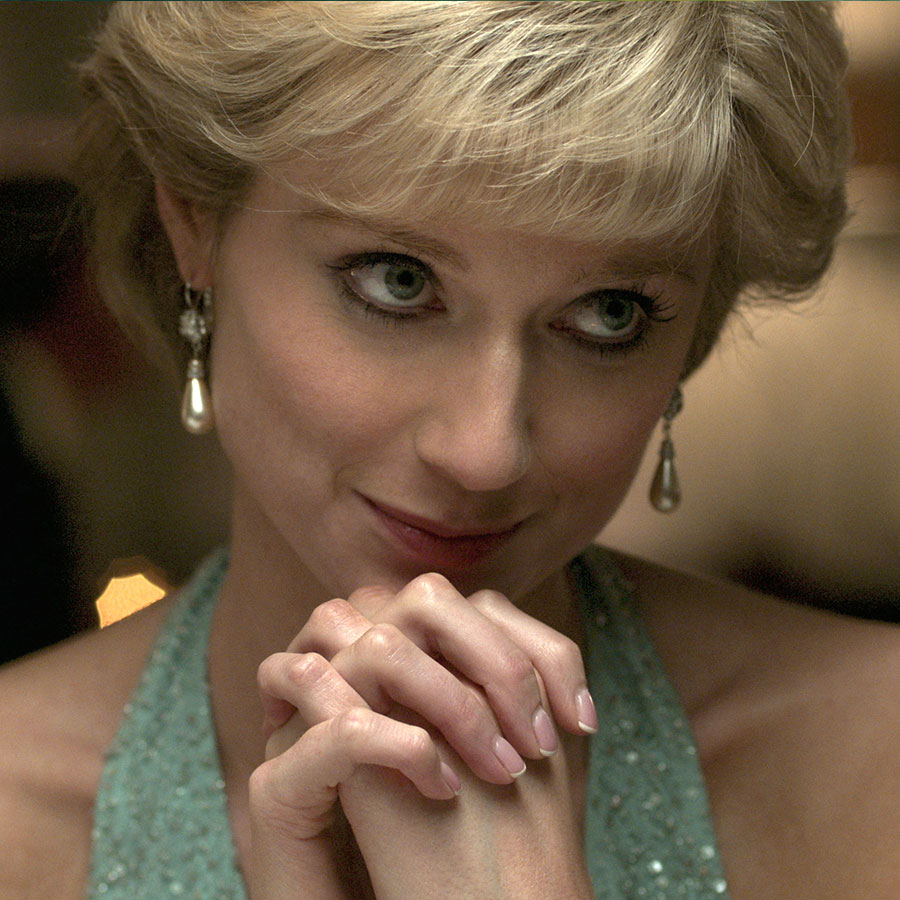 Elizabeth Debicki stars as Diana, Princess of Wales, in Season 5 of 'The Crown,' as well as the sixth and final season of the series due next year. Photo: Courtesy of Netflix

The fifth season of The Crown, which premièred on Netflix on Wednesday, explores the same marital tensions between Prince Charles and Diana, Princess of Wales, and the British Royal Family dramatized by Pablo Larrain’s 2021 psychodrama Spencer. But the new season hews more closely to Diana’s own style evolution, and the empowerment narrative behind her fashion choices — and they are very much loaded choices — are very much on display.

Actress Elizabeth Debicki, who takes up the role in the final two seasons of the series, even honoured Diana off-screen at The Crown season première on Tuesday in London by wearing a strapless Dior haute couture gown whose trailing neck scarf are a nod to the diaphanous blue Catherine Walker gown the princess wore on the red carpet at Cannes in 1987.

Last season, The Crown was all about the ’80s: Season 4 chronicled the engagement, wedding, and deteriorating marriage of the Prince and Princess of Wales. Fashion-wise, much was made of the second life that Emma Corrin gave Diana’s notorious “black sheep” sweater. Corrin wears a recreation of the 1981 pullover at a moment in the narrative when the young fiancée is lonely and isolated in the palace on the eve of the wedding.

And now Season 5 looks at that sacrificial lamb and says, “Hold my beer” before serving up the dishy “revenge dress.”

The on-set photos alone — of a replica revenge dress on Debicki during filming last year — broke the internet. And the moment Debicki herself put the recreation on was “very significant and quite powerful,” the actress told Entertainment Tonight.

At the time, in 1994, it was the outfit heard around the world: a little black dress, instantly dubbed the “revenge dress,” created by designer Christina Stambolian. The ruched black crepe cocktail frock is so famous it has its own Wikipedia page and last sold for US$74,000 at Christie’s auction house. According to the designer, it had been made for the princess much earlier but was shelved because it seemed too risqué.

The occasion was the summer Vanity Fair fête hosted by then editor-in-chief, Canadian Graydon Carter, at London’s Serpentine Gallery. The daring off-the-shoulder minidress silhouette was a dramatic departure from the usual anodyne and tastefully demure stuff of royal protocol and showcased a body that was fit and strong from ballet and swimming.

Canny timing is what made it a perfect storm: the night of that party happened to be when Prince Charles’s candid tell-all interview aired on national television. Originally planned to put him in a more sympathetic light following the couple’s 1991 separation, Charles instead admitted to infidelity and confirmed rumours of adultery with his then-mistress (now wife and Queen Consort) Camilla Parker-Bowles. Rather than hiding out and riding out the scandal, Diana gamely stepped out looking fabulous. And the “revenge dress” was born.

As a clap-back moment, it’s up there with Ivanka Trump’s indelible The First Wives Club quip: “Don’t get mad — get everything!”

Vanity Fair played a role in the moniker, too: in the wake of the Prince and Princess of Wales’s 1991 announcement that they were ending their marriage, the magazine had profiled her in a long article they entitled “Diana’s Revenge.” Writer Anthony Holden’s opening gambit was to contrast her before and after wardrobe as reflecting her mood: “One day she was dressed in sober gray, the next in dazzlingly happy pink.”

Everything that Diana wore is now both modern-day fashion history and an object lesson in the power of clothing; after that Serpentine party the princess would soon reinvent herself with a new haircut and a more tailored, less frou-frou work wardrobe that meant business — boxy, like the protective armour she needed for her tireless charity work and its many photo ops. “When her chance for revenge came,” Holden observes later in the piece, “all humankind was on her side.”

Eloise Moran, author of a clever new psycho-biography told through wardrobe called The Lady Di Lookbook (based on her popular Instagram feed @ladydirevengelooks) defines the spirit of revenge dressing as anything that screams, “I’m better off without you.”

She considers much of Diana’s mid-’90s clothing to be revenge in nature — from the bicycle shorts and oversized sweatshirts worn to and from the gym to the trim, short skirt suits. But she also persuasively parses the royal’s various other personas expressed through clothing — like soccer mom and devoted charity worker — that The Crown costume designer Amy Roberts gives life to in Season 5. Roberts is clearly aware of the fan service element, dressing Debicki in another familiar eye-catching look — the short and plunging silver beaded Catherine Walker halter — but cleverly puts the well-known outfits into different contexts to advance The Crown’s character arc and storytelling.

As Diana’s public persona evolves from girlish and fresh to tailored, striking and even strident, the costume designer is mindful to remain true to the late princess’s parallel penchant for casual comfort, like western boots and military insignia baseball caps, that serve to reinforce Diana’s paranoia about surveillance throughout the season.

Reading Moran’s book this past summer was a great cheat sheet for the season that covers how Diana takes up the role of ’90s-era People’s Princess and sheds the pie-crust collars and polka dots for higher heels, shorter skirts, and fashion-forward sleek designer looks. These modern items sit in contrast to the slightly dated ’80s pouf dresses still favoured by blowsy Princess Margaret (Lesley Manville) in the same season.

Early on, Moran contends, when the media took the royal’s silence as license to spin their own narrative by instead dissecting her fashion choices to extrapolate meaning, Diana realized her clothing had the power to communicate. “Each outfit became somewhat autobiographical,” she writes.

After close attention to thousands of photographs Moran also suggests, for example, that the revenge dress’s flirty, fluttering scarf was a callback (and emphatic counterpoint) to Diana’s wedding gown and its enormous train. Taken as a pair they do arguably bookend the public beginning and (very) public ending of her relationship with Charles.

Another provocative frock — a barely-there, lingerie-inspired slipdress from John Galliano’s debut collection for Dior, helped the People’s Princess make a similar point in 1996 soon after their divorce was final. (With both, she wore the pearl and diamond-set sapphire choker, a gift from the Queen Mother.)

There’s a challenge for The Crown in recreating the ’90s — a period arguably more alive in the current cultural memory than previous seasons, with a focus on Diana’s transformation from sacrificial lamb to revenge dressing royal in body-con Versace and bicycle shorts.

However trapped and insecure — she may have felt estranged from the Royal Family as a single parent, and in the unrelenting glare of the press (all of which The Crown’s fifth season explores) — the face she presented to the world in a professional setting told another story. Remember, Diana harnessed the power of visual communication, first with the symbolic photograph of her posed alone in front of the Taj Mahal (a monument to love) in 1992, then through her wardrobe.

A deft spin-master with exquisite instincts to convey a newfound confidence and independence, Diana’s weighted style choices foreshadowed the expressive sartorial culture we live in today, where even silent images of politicians and celebrities speak volumes when decoded.

Or, as fashion writer Sofi Thanhauser puts it in Worn: A People’s History of Clothing, “No other animal gets dressed, or tells stories. These two capacities are, it seems, deeply connected.”

‘The Crown’: Netflix Releases New Photos of the Queen, Charles and Diana, and Others From the Upcoming Fifth Season

The Legacy of Diana, the People’s Princess, and How She Changed the Royal Family