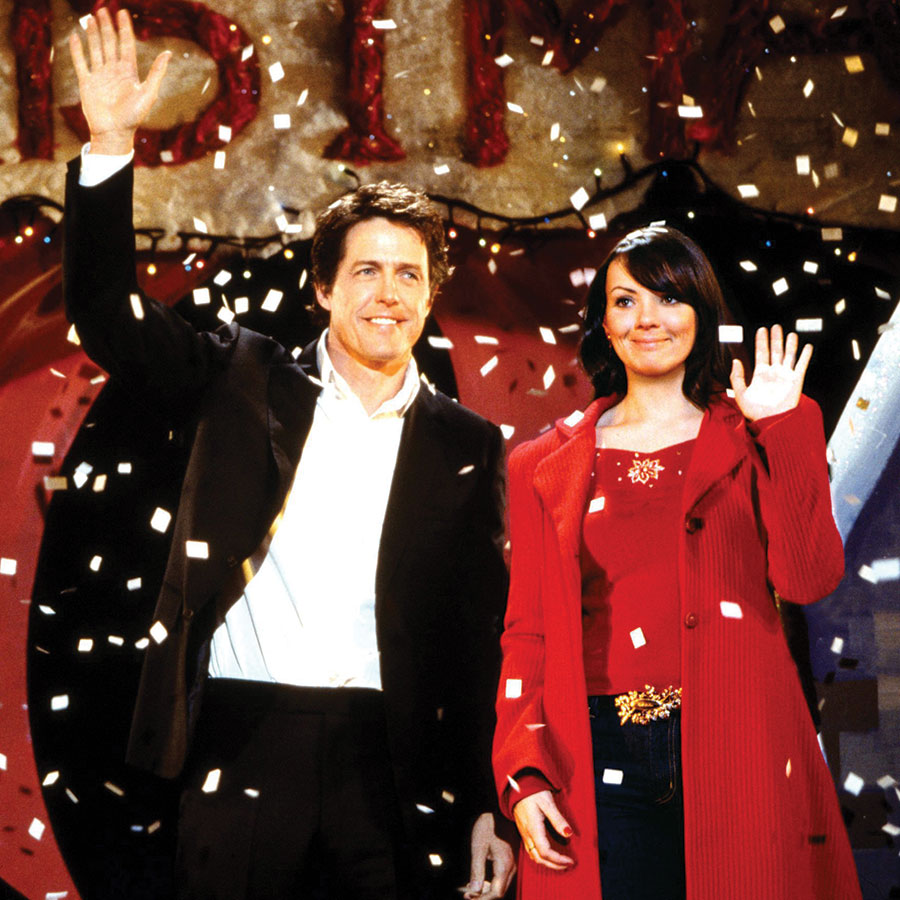 Hugh Grant and Martine McCutcheon in 'Love, Actually' in 2003. Grant, 62, and other members of the cast are reuniting for a televised anniversary reunion on Tuesday night. Photo: Universal/courtesy Everett Collection/Canadian Press

What is Love Actually?

Nearly 20 years after the quirky Christmas classic hit theatres, a new ABC special is inviting the cast back in hopes of answering that elusive question.

The romantic comedy, which will actually celebrate its 20th anniversary next year, follows the intertwined stories of its ensemble of characters as they navigate love in its many forms. Notable for its all-star cast, the film also starred the late Alan Rickman along with Liam Neeson, Andrew Lincoln, Keira Knightley, Colin Firth, Chiwetel Ejiofor, Rodrigo Santoro, Lúcia Moniz, Martin Freeman, Kris Marshall, Joanna Page, Heike Makatsch, Abdul Salis and Gregor Fisher, while Denise Richards, Billy Bob Thornton and January Jones were among the famous names who made cameos.

In a promotional clip for the one-hour special, Sawyer, 76, asks the cast to complete the sentence, “Love actually is … ,” prompting Grant, ever the optimist, to jokingly answer, “Dead.”

“Even in the cities where you’d be guaranteed to see couples snogging in the streets — Paris, Rome — no, they’re just staring at their phone,” the 62-year-old British actor adds.

Sawyer receives more Christmassy responses from the rest of the cast, including Bill Nighy, 72, who replies “all around,” quoting the Christmas classic’s mantra and his rockstar character’s cheesy Christmas song.

The ABC special promises “insight into behind-the-scenes secrets and iconic scenes,” some of which have already come to light in trailers for the special, which aired on ABC this week and is now available to stream on Hulu.

They include Grant’s recollection of his solo dance scene in the film, which the British actor wasn’t keen on from his first read-through of the script.

“I saw it in the script and I thought, ‘Well, I’ll hate doing that,'” he recalls of the scene, which sees his character, Britain’s love-struck prime minister, cut a rug throughout the residence at 10 Downing Street to the The Pointer Sisters’ “Jump.” “I didn’t fancy doing the dance at all, let alone rehearsing it.”

“He kept saying no,” writer-director Curtis, 66, remembers in a clip. “I think he was hoping I’d get ill or something and we’d say, ‘Oh, well, what a shame, we’ll have to lose that dancing sequence.'”

Curtis, who was thrilled the scene made the cut, adds that it was “a bit of contractual obligation acting” that helped Grant push through some grumpiness on the day they filmed the dance sequence.

“A contractual guillotine, yes,” Grant says, agreeing with Sawyer’s characterization of the situation on set ahead of the sequence. “And I’m out of rhythm, by the way, especially at the beginning when I wiggle my ass.”

His misgivings about the scene aside, Grant gives himself full credit for coming up with the “genius” idea of having his secretary catch him mid-boogie, which “coincidentally” brings the solo jig to an end.

“To this day, there’s many people — and I agree with them — who think it’s the most excruciating scene ever committed to celluloid,” he adds jokingly. “But then some people like it.”

Grant would relive his embarrassment for a good cause in 2017 for a Love Actually mini-sequel, which saw him perform the offbeat dance sequence to Drake’s “Hotline Bling.” The 10-minute short was part of Comic Relief charity’s Red Nose Day, a popular fundraiser aimed at ending children’s poverty.

In another clip from the special, Thompson, 63, reveals Grant’s unique summation of the film following their first screening.

“Hugh came up behind me as we were walking out and said, ‘Is that the most psychotic thing we’ve ever been in?'” Thompson recalls.

According to ABC, the special “will also examine how the COVID-19 pandemic refocused the ways we love and connect and the omnipresent acts of kindness inside our families and communities.”

Meanwhile, nearly 20 years after its release, Curtis says the film still drives home the universal truth that love actually is “all around.”

“I still believe that so passionately,” he tells Sawyer in the trailer. “Films can act as a reminder of how lovely things can be and how there are all sorts of things we might pass by which were in fact the best moments of our lives.”

Queen Elizabeth Joked Intruder Had “Put a Dampner” on Christmas