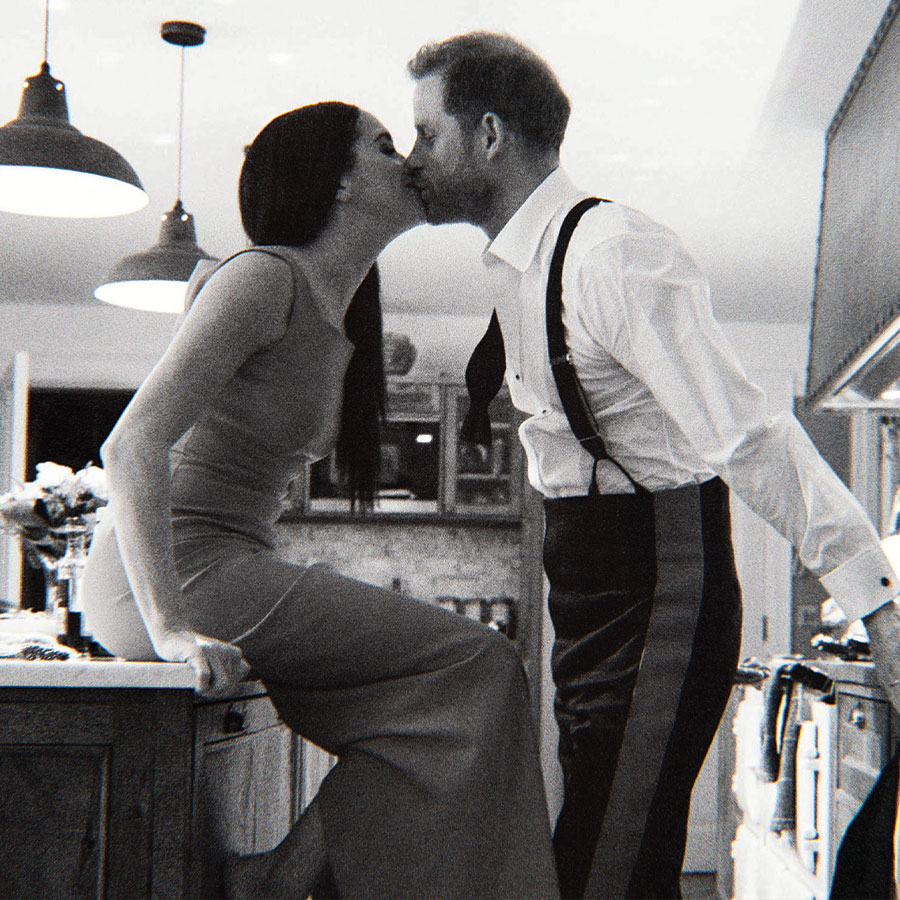 A debut trailer for the Duke and Duchess of Sussexes’ Netflix doc offers a glimpse at what the couple say is the inside story of why they stepped away from royal duties. Photo: Netflix via AP/Canadian Press

A dramatic, slow-motion video of romanticized black and white pics of Harry and Meghan engaged in moments of joy, sorrow and lots of smooching was released this morning. The trailer for Harry & Meghan: Becoming Royal was released by Netflix, ahead of the première for the six-episode series later this month. It is both a dramatic taking-control-of-the-narrative moment for the Sussexes and a bomb straight to the heart of the Waleses’ American tour.

Alongside shots of the Sussexes’ (previously private) wedding reception and royal tour of Africa and formal, tense photos beside Harry’s family, we see some cute selfies and photo booth shots as well as one of Meghan pregnant, backlit in the sunshine, and another with her head down in tears. The trailer is black and white, a device that adds an intent of elegance to the aesthetic.

We hear Harry’s voice saying, “No one sees what happens behind closed doors,” effectively promising juicy intimate access. Another sound clip of him promising he will do anything to protect his family follows. It closes with Meghan intoning, “When the stakes are this high, doesn’t it make sense to hear our story from us?”

Netflix likely would have determined the drop date for this teaser. That said, to royal watchers the timing is suspect to steal thunder, timed, as it is, directly in the middle of William and Kate’s American tour and the launch of the Prince of Wales’ Earthshot Prize.

That Harry and Meghan has not always heeded Buckingham Palace’s decree not to trample on the news cycle of other royals, particularly more senior royals, has been obvious for a long time. Dropping remarks about their unhappiness at the end of their South African tour, then releasing a secret documentary elaborating on the same just as William and Kate were on tour in Pakistan.

We are now used to defiant timing from the Sussexes. There was the Oprah interview while Prince Philip was on his deathbed, as well as many more instances, large and small, from the photo release of Meghan visiting a dog shelter that knocked Camilla’s domestic violence speech off front pages right up to Meghan’s The Cut cover the week before the Queen’s death and their U.K. charity tour.

Look, they do have every right. I’m sure it all deeply rankled, especially for an American, to have one’s movements so controlled. I’m sure also that the alienation and racism Meghan was feeling likely hardened both her and her protective husband against the courtiers and all their silly rules.

The trailer feels a little bit like an ad for a sequel of The Notebook. We knew that the giant deals Meghan and Harry secured with Netflix and Spotify would need some big-time intimate access and revelations (and press-courting controversy) to earn out the many, many zeroes in those contracts. Perhaps showing lots of affection — a heady contrast to the Royal Family that is very much not an openly public affectionate family and where emotions are to be held at bay behind the stiffest of upper lips — is one way to fulfill those contractual obligations, and to foment interest.

This is the Netflix description of what we will soon be able to stream: “The series explores the clandestine days of their early courtship and the challenges that led to them feeling forced to step back from their full-time roles in the institution.” It promises “commentary from friends and family, most of whom have never spoken publicly before about what they witnessed,” as well as historians. Netflix concludes that the doc “paints a picture of our world and how we treat each other.”

Harry and Meghan handed over the reins to director Liz Garbus (Becoming Cousteau), and of the experience, Meghan told Variety: “We’re trusting our story to someone else, and that means it will go through their lens.”

Following Meghan’s Spotify Archetypes series that debuted this past summer, there remains one further shoe to drop in January, the publication of Harry’s promised “raw, unflinching honesty” memoir with the brilliant — and loaded — title, Spare. The palace, it has been much reported, is trepidatious about what accusations may be forthcoming from both the series and the book, which could further harm the monarchy and upset the early days of Harry’s father, King Charles III’s reign.

That the sons of Charles and Diana, who have reputedly been feuding since early into Harry and Meghan’s relationship, are so at each other’s throats that they are jockeying for position and for hearts and minds, and it’s really, really sad.

William and Kate had a tough Caribbean tour earlier this year because of calls for them to address the Crown’s role in the slave trade and how colonialism created structural racism around the world. Let’s hope the palace heard the call for the changing of policy and approach. This Boston tour was sunk from the get-go by William’s godmother’s overtly racist questioning of a guest at Buckingham Palace, a story that broke as their British Airways flight was above the Atlantic.

William, and his father the King, have denounced racism. And yes, let’s hope they take all of this as a huge wake-up call to do a much more thorough overhaul of the institution to present a staff and attitude that better reflects the modern world.

Harry and Meghan have said much about the duchess’ experiences with racism in Britain, and will likely be saying much more in both the series and Harry’s book.  It is important testimony, and it needs to be acted upon with serious intent, and with alacrity.

But there is no way to see the telling of Harry and Meghan’s love story right now as anything but a gauntlet thrown down, a great big middle finger to the House of Windsor. How great would it have been if they could all have worked together, Harry and Meghan and William and Catherine, along with Charles and Camilla, of course, to change the institution for the better.

Royal Family’s Reckoning With Race Comes to a Head as William and Kate’s Trip to the U.S. Is Marred by His Godmother’s Racist Comments

Meghan Markle On Grieving for the Queen, and Other Revelations From Her ‘Variety’ Interview