A Cold Embrace: 5 Botched Statues That Got a Far Worse Reaction Than Boston’s New MLK Sculpture 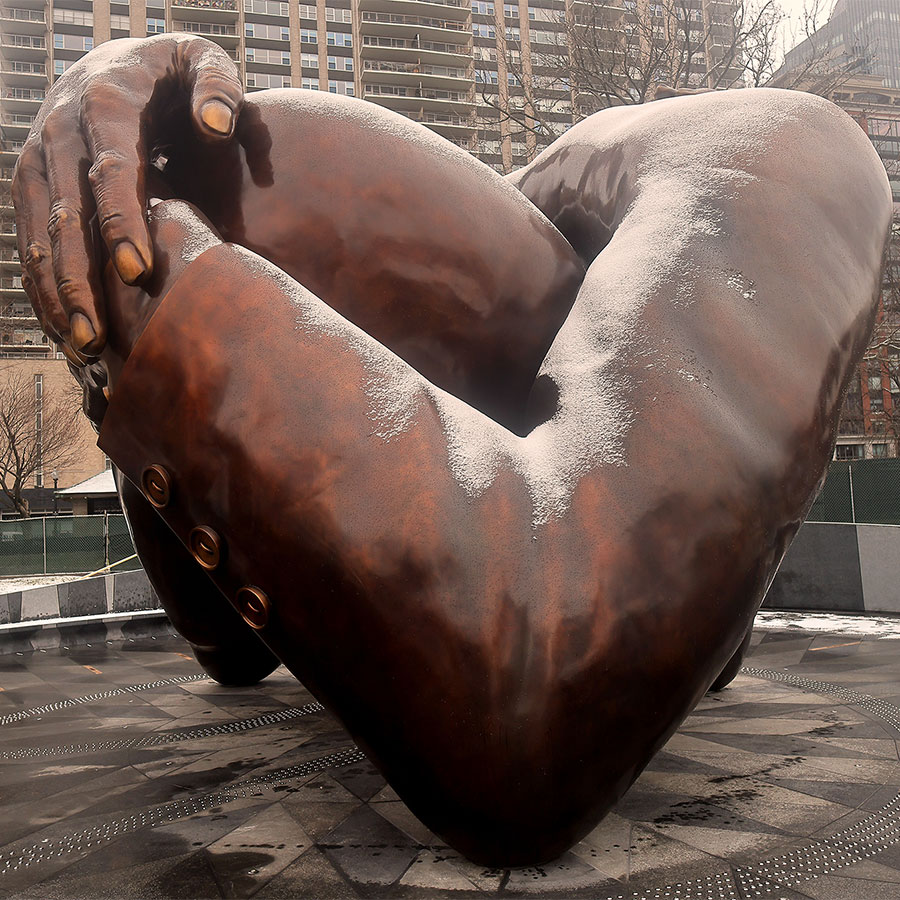 A new sculpture honouring Martin Luther King Jr. and the civil rights leader’s wife Coretta Scott King titled “The Embrace” that was erected in Boston this month isn’t receiving, well, the embrace you might expect online.

The 20-foot tall bronze statue, which was unveiled in Boston Common, is inspired by a photograph of the couple embracing after King received the Nobel Peace Prize in 1964. However, the artist’s choice of only including the the pair’s arms and shoulders in the piece leaves plenty of room for misinterpretation.

Criticisms on Twitter mostly centre on the strange, misshapen masses (apparently cut from each of the subject’s upper backs) that both sets of hands are grasping.

A user named ITMCitizen says one angle looks “like someone showing off the potato that won first prize at the county fair,” while other less PG-13 interpretations point out the phallic nature of the forms.

But mixed in with the immature trolling were critiques that took issue with the artist’s choice to leave their heads out of the piece.

“The original photo this inspired was beautiful and perfect,” a user named Shireen Qudosi said. “Why not just honour that with a replica instead of this horrible odd weirdly sexualized bronze blob …”

Another, commenting under the username Nan, asks if including their heads was too much too ask, adding “a statue shouldn’t bring such confusion.”

Hank Willis Thomas, the conceptual artist who was selected out of 125 applicants for the monument project, says his decision to focus on the shoulders was symbolic.

“In that picture, you can see the weight of him on her shoulders as they embrace,” he told NBC News. “And I realized that this was really a metaphor for his legacy — that she carried his legacy on her shoulders for several decades after he was assassinated.”

In his defence, not every angle is awkward. When viewed from the side (as seen at the top of the page), the embrace forms the shape of a heart.

“The artist’s ability to capture their embrace in such a powerful and unique way is truly impressive,” he wrote.

Thomas’ proposal required approval from multiple entities, including the Boston Art Commission and Boston Landmarks Commission. He also received US$10.5 million in funding for the project from Embrace Boston, a non-profit organization that focuses on racial and economic justice.

But the most important nod of approval came from Kings’ son, Martin Luther King III, who spoke at the statue’s unveiling about the significance of Boston, where MLK and Scott King met in the 1950s, and where the civil rights leader earned his doctorate at Boston University.

“They both loved this city because of its proud heritage of the abolitionist movement and its unique intellectual and educational resources,” he said at the event.

“Indeed, Boston became the place where they forged a partnership that would change America and make a powerful contribution to the Black freedom struggle. That’s what I see in this beautiful monument.”

Of course, going the abstract route in commemorating such beloved historical figures was bound to ruffle some feathers. Yet, the more traditional route hasn’t always been the safest course either.

Here, we take look at five of the most meme-worthy statues unveiled in recent history.

1. Talk About a Bust

In 2017, Cristiano Ronaldo’s hometown of Madeira named the region’s international airport after the football star and honoured him with a bust — not in his likeness — just a bust of some guy apparently.

The bronze statue and its crooked smile was skewered online, with several Twitter users comparing it to The Head, a talking stone bust from the British kid’s television show Art Attack.

“It is impossible to please the Greeks and Trojans,” Emanuel Santos, the artist responsible for the bust said after learning of the mass criticism it received, according to The Guardian.

“Neither did Jesus please everyone … This is a matter of taste, so it is not as simple as it seems. What matters is the impact that this work generated.”

A statue of Lucille Ball erected in the Hollywood legend’s home town of Ellicott, N.Y., went viral for its off-putting appearance in 2015, earning the nickname “Scary Lucy.”

While the statue attracted plenty of social media jabs, fans of the late actress were hardly amused by the botched attempt. In fact, a large group of them even started a Facebook page calling for the statues removal.

The creator of the piece, Dave Poulin, would later pen a letter published in various media outlets offering to redo the piece.

“I take full responsibility for Scary Lucy,” he wrote, adding he didn’t mean “to disparage in any way the memories of the iconic Lucy image.”

Despite the apology, Poulin never got his shot at redemption. A year later, a new Lucy statue designed by another artist would replace his.

The statue honouring the late, great Cubs broadcaster Harry Caray outside of Wrigley Field certainly captures the legend’s likeness, right down to his signature glasses and sunny disposition.

Unfortunately, things get a little hairy (pardon the pun) at the bottom half of the white bronze statue, where the commentator looks as though he’s trudging through a thick bog of tortured souls.

The ghost-like faces are meant to represent the club’s loyal fan base who tuned into his broadcasts for nearly two decades, but the overall gothic feel of the statue’s base just doesn’t seem to capture that relationship.

Capturing movement in a sculpture can’t be an easy task and, unfortunately, it showed in this artist’s attempt at illustrating Washington Senators great Walter Johnson’s pitching motion.

According to the art studio that produced the 8-foot tall statue, it conveys “the fourth dimension in art.”

Unfortunately, the attempt falls short and the blurred affect, intended to show multiple moments in the pitchers delivery, ends up looking more like an unsightly appendage.

The legendary pitcher’s grandson, Henry Thomas, didn’t pull any punches in his critique of the piece.

“It just doesn’t work,” Thomas told the Washington Times. “Those big pieces of matter coming out of Walter’s shoulder look like driftwood. But I don’t like any part of the statue. I really object to it. It’s ridiculous, not even close. He looks awkward. His delivery point is all wrong. His legs are too stiff. The ‘W’ on his uniform is too big. And the inscription is on the back [of the base]. It doesn’t even face the plaza.”

When two-time World Cup soccer champion Brandi Chastain was presented with a plaque in her likeness to mark her 2018 induction into San Francisco’s Bay Area Sports Hall of Fame, the attempt not only got roasted online, it set off a debate as to who it really looked like.

Meanwhile, Chastain could hardly bring herself to compliment the effort at its unveiling.

Back to the 80s! Dolly Parton, Belinda Carlisle, Cyndi Lauper, Gloria Estefan and Debbie Harry Collab on ’80 For Brady’ Song

As Tom Hanks Plays a Loveable Grump in ‘A Man Called Otto,’ We Revisit Our Favourite Big-Screen Curmudgeons