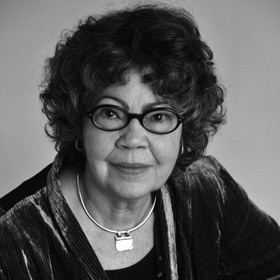 Dancing Lessons finds “G” in a retirement home, where she has been placed by her estranged daughter. As “G” begins to record her past in a notebook, she begins to see her past with fresh eyes and discover truths about herself and her family.

Athena McKenzie: Congratulations on your nomination for the Amazon First Novel Prize. Does it seem strange to be getting nominated for something like this when you’ve been writing for so long?
Olive Senior: It is strange. But it really is something new for me to write a novel. It was very challenging. Although I’ve written a lot of fiction, this was something completely different. The thing with poetry and short fiction, which is what I love, is that I can keep most of it in my head when I’m writing and have a certain amount of control of what I’m doing. The novel is just so vast, it just requires a different mindset that I learnt as I went along.

AM: Who is “G”? Do you know where her voice came from?
OS: I don’t know. Her voice just came to me. It’s amazing. I just sat down and she started talking. The opening sentence of the novel is what came to me and what I first typed— “How was I to know he had a bad heart?”

It’s as if I just worked with her everyday. As if this person wanted to tell this story. One of the things that was at the back of my mind was a quotation by the American poet Linda Pastan about the biblical Eve. She asked the question, since Eve didn’t have a mother, could she be a good mother? I think that was going on in my head, the whole issue of can you be a good mother if you haven’t been mothered? And that’s the situation with the character in the novel and the root of a lot of her inability to cope with life.

AM: Why did you use the devise of the journal?
OS: It just came to me. There are so many women who don’t have a voice, so many people really. Being able to write in this journal gave her a voice. She’s a great reader. Her education is through reading. She’s a silent woman. She’s not accustomed to speaking to people.

AM: The reader doesn’t get to hear her name until near the end of the book. What was your intention with this?
OS: To me, it’s a voyage of self-discovery. To say your name, is to affirm who you are. Names are so significant, the search to affirm her name and her identity are bound up with the loss she suffered as a child. She really didn’t know who she was. Until she takes charge of her life towards the end and signs her name.

AM: What are you working on now?
OS: I just had a children’s book out called Birthday Suit and I’m working on another book of poetry. I think I’m going to end up writing another novel, although it’s not really what I want to do, but it’s as if the stories I want to tell now are bigger than a short story. I have learned over the years as a writer that even when I don’t seem to be doing anything, a lot is going in my unconscious. That’s where the work happens and then I write it. So, we’ll see what happens.