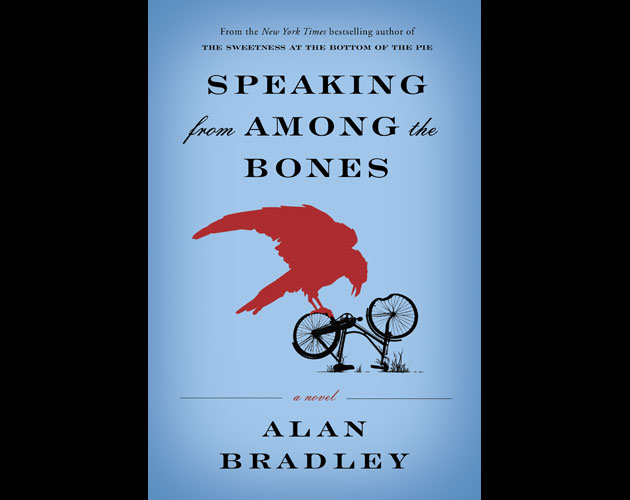 Canadian mystery writer Alan Bradley’s first book in his Flavia de Luce series was published when he was 69. The series, set in the 1950s in the fictional English village of Bishop’s Lacey, is now on its fifth instalment, Speaking From Among the Bones. Fans around the world are eager for some time with its precocious 11-year-old detective – whose obsession with poisons just adds to her charm. Zoomer talked to the author from his current home on the Isle of Mann.

Athena McKenzie: Now that you’re on the Isle of Mann and actually living in the U.K., how does that influence your writing?

Alan Bradley: It really does, being in the U.K. air and the U.K. atmosphere. Hearing English people all around talking. It gives you much more of a grounding for the setting — the scenery and the historical surroundings tend to envelop me more in the book than writing in Canada.

We had planned from the time we left B.C. to do a bit of travelling and see a bit of the world and live on different islands, and this is one of them.

AM: Knowing the series has been extended to 10 books by your publisher, how has this changed Flavia’s storyline or made you rethink how the series will progress?

AB: Not very much. I had originally outlined the first six books. It was going to be, more or less, a complete long story in six books. I’m still on track for that. Speaking From Among the Bones is just where I was planning it to be, so the sixth book will be the conclusion of that particular storyline, and then we’ll just go from that point. There are a number of possibilities. I’m not quite sure which ones will come to the fore.

AM: You say you had the series planned out over six books. Does anything change or surprise you as you’re writing them?

AB: In the details of the books, yes. They tend to be quite spontaneous. A lot of it arises out of the action. That’s probably most noticeable in the smaller things. Quite often Flavia will totally surprise me with what she does. Particularly if I have some plan in mind, Flavia will thwart me and do something entirely different. My knowledge of where we’re going tends to be limited to the overall setting for the story, the texture and the tone and some of the research for the book. But within in that, the characters are always quite surprising. I quite often laugh at Flavia, I’m sorry to say, when she does something quite unexpected. It’s constantly fresh and surprising.

AM: I understand that Sam Mendes has the television rights to the Flavia series. With your background in television and script-writing, are you going to be involved?

AB: Yes, I am to some extent. We’re not far enough along to determine at the moment, but I will certainly have some say in the scripts and perhaps in casting. There was a time when I first retired when I would have given anything to write the scripts for it. Now, doing what I’m doing, I’m just eternally grateful that I don’t have to. I can be on the sidelines, watching and encouraging and shouting ideas without actually having to do all the work. Writing a script is a huge responsibility and usually a stressful occupation. I’ve been suggesting to people curious as to how it might turn out to look at another series done by the same company, which is called The Midwife. It’s also set in 1950, and you get an idea of how they handle that time in history. They’re just gorgeously done.

AM: You mention retirement.Was this how you imagined your retirement because most people wouldn’t consider you retired?

AB: I always felt it would be lovely to be doing this. To be writing full time. As always, when you’re going along a certain path in life, you don’t really expect things to turn out. You think it would be nice if they did. Essentially, you’re just sitting at a desk writing a book and you can’t possibly foresee the consequences of having a book or a series of books turn up on the New York Times bestseller list; and being translated into 35 languages; and sold around the world; and becoming a television series. I don’t think you could ever foresee that. It’s a bit unreal.