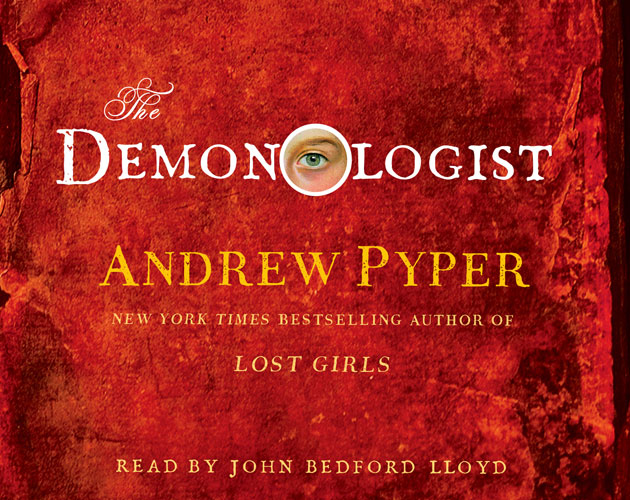 A stolen child, an ancient evil, a father’s descent — the thrilling tag lines for The Demonologist, the new literary horror novel from Zoomer fave Andrew Pyper, whose previous titles include Lost Girls, The Killing Circle and The Guardians. In The Demonologist, a professor of literature who specializes in Milton’s Paradise Lost becomes convinced his daughter’s apparent suicide was actually a trick of an ancient demon, and he must battle against time to rescue her from purgatory.

Zoomer sat down with the author to talk inspiration, movie deals, and ghost story obsessions.

Athena McKenzie: How do you characterize this novel?

Andrew Pyper: I see it as a graduation. The previous books, in terms of genre, are hard to see clearly. They’re literary thrillers, I guess, but they do different things. And there’s always been sprinklings of the supernatural. None of them have been properly described as horror. I think this is the first novel where that word applies. But it feels like an arrival. It feels like a journey where this feels right.

AM: Why Milton and Paradise Lost?

AP: It came about this way. I like to read those anthologies that come out all the time, about people’s experiences with the supernatural. So, it would be something like the Ghost Stories of Victoria 2012 Edition. They’re almost annual things and every region has one. I pick those up whenever I see them. They’re not necessarily that well-written, but first person accounts of encounters with the supernatural. I was being a glutton with these things at one point and I started to see a pattern in the backdrop to many of these anecdotes. And often it was just told in passing — there was some emotional conflict that was going on with the people that were experiencing these things — some degree of anxiety, a recent loss, moving to a new town, divorce, the loss of a child. Something that was understandably emotional. These people would cite that but never really call on it again. That got me to thinking about the general idea of horror and emotion, horror and loss, horror and affect. And that got me to thinking about Satan, Milton’s Satan. And how that poem I read in university: this character, this demon, his pain and his hell are really a construct of his emotion, his sense of loss, his alienation from his father. His being cast out of the family home. Really, for me, the most moving passages were where he mourned the loss of his position. That got me thinking about a horror story that is emotionally fueled, where the demon’s motivations are similarly geared. Where the demon just isn’t pure malevolence and arbitrary in its purpose. So I reread Paradise Lost and the idea of an expert in Paradise Lost started to take shape. I didn’t lead with Milton. I was brought to Milton with the idea of writing a horror story that was fueled by human emotion.

AM: Is horror part of your regular reading?

AP: I wouldn’t say I seek it out. I’m a very random reader. Like I said, I go on bad ghost story jags. And then the Pulitzer winner and the highbrow and down to the low again. I did read it consistently when I was younger, in my teens and twenties. I wolfed down Stephen King and the Lestat novels [Anne Rice]. I think for me, at an early stage, horror was of greater importance in terms of what was on my menu. Having said all that, I’m very aware if the reviews say you have to check out a title. I recently read The Last Werewolf by Glenn Duncan and it was really good. So, if people say you should check this out, I generally do.

AM: Tell us about the movie deal for The Demonologist.

AP: It’s under option with Robert Zemeckis’ company ImageMovers, and Universal Pictures. The last I heard, there is a script that is essentially finished. I haven’t read it, but it was written by a guy called Robert Schenkkan, a Pulitzer-winning playwright. He has written screenplays as well. He wrote the adaptation for the Graham Greene novel, The Quiet American. So that was an encouraging choice. They said they want to make a horror movie of the kind Hollywood used to make, particularly in the 70s. Classy, big, smart horror movies that played to a wider audience and not just teens. So that’s the intent. I think that’s why they hired someone with that kind of pedigree, to bring the ideas and the emotion and the character stuff that the contemporary Hollywood horror movie sadly doesn’t have. Apparently Robert Zemeckis is a horror fan and he’s hungry to make another horror movie. As far as I know, he’s not strictly attached as director, though it would wonderful if he did attach himself.

AP: Another novel that’s been outlined. Sarah Knight, the Simon & Schuster editor, was involved. This is the first time that I’ve pitched and discussed a novel with an editor. Up to now, it’s been kind of, “go away and write a novel and let us know when it’s done.” It’s actually been quite different for me. I thought I had an idea for a novel until I talked to Sarah about it and she was like “No, maybe later.” So, it was hard at first. I came back with a couple of different ideas, and she called those off like a catcher refusing my pitches. Just when I was at the point of frustration, a previous idea Frankenstein-stitched to a new thought I had, and she said, ‘Yeah, that’s it!” It was creatively useful to do the “What about this, what about that?” Enormously useful. The next time I teach a writer’s workshop, I think I’ll bring that component in. Put away the pens and the laptops and let’s just pitch stories. It’s not so much the pitch, but what follows from it in the story. With the “What about?,” you end up landing somewhere you didn’t start, but it’s generally better.