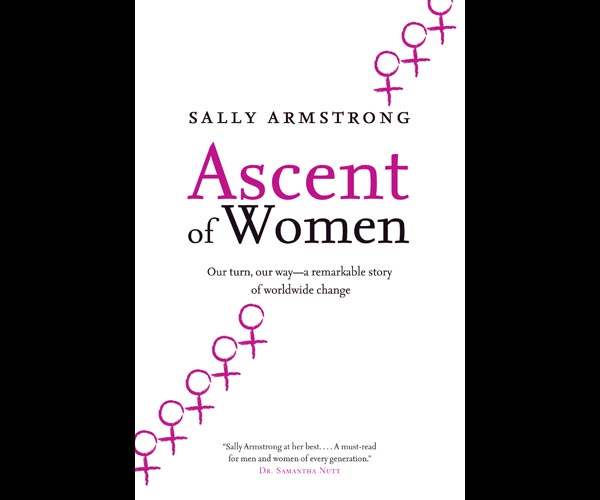 For International Women’s Day, Zoomer talked to humanitarian and journalist Sally Armstrong about her new book Ascent of Women, which introduces us to the girls and women who are leading change around the world.

Athena McKenzie: In your book, you say the rights of women are at at tipping point. What do you mean by that?

Sally Armstrong: For a very long time, people have tried to alter the status of women – particularly in places where women are very oppressed and certainly in places where political opportunists have yanked the religion and culture to use it against the women. A lot of changes have been made and, in countries like Canada (although we are not at the finish line), we have done very well in altering the status of women. I cover conflict and I cover it from the point of view of what happens to girls and women; about three years ago, I got the impression the earth was shifting for women. When I was sent to do a story in the Congo or Afghanistan or wherever I was, I started to ask the women. And indeed the earth was shifting. They could see that oppression was not their lot in life. They didn’t have to carry on like this.

Because change happens so rapidly today, I jumped on this bandwagon immediately; and while I believe my book is the first to talk about it, I think there are people running straight up behind me with the same thesis. As it’s happening, it’s happening quickly, it’s happening powerfully and I think it’s the best change.

AM: Would you say the women in these regions are the engines for the change?

SA: You’re absolutely right. We used to depend on the United Nations to make change. We depended on diplomats, we depended on governments, but none of that worked. It’s the sisters themselves that have decided that if we don’t make the change, none of us are going to make it.

AM: Back when you first starting covering the plight of women (like Eva in the Balkan War), the world didn’t seem interested in hearing these stories and media outlets weren’t looking to cover it. How has that changed?

SA: This is the biggest change and this is the reason for this book. You’re right; when I did the story of Eva, who was gang-raped — as 20,000 women were gang-raped, some of them eight years old, some of the 80 years old — I didn’t even try to do that story at first because I was in the magazine business, and we can rush something to press in about three months. This was a headline news story. I was in Sarajevo doing a story on the effects of war on children when I started to here about the rape camps. And at first I thought this can’t be true, it’s so barbaric — remember this was before Congo, before Rawanda — but then I was hearing it from more and more credible sources and I thought this is true. I gathered everything I could get: mobile numbers, anecdotes, names of people. I brought it back to a news agency in Toronto and said give this to one of your reporters, this is a breaking story. And they didn’t publish it because in those days women’s issues weren’t seen as that important. Soldiers rape and pillage, and rape is the lot of women’s life. That was the attitude people had.

AM: What’s the difference today?

SA: Look what happened recently. Look at the story of Jyoti Singh Pandey in India, the girl who was gang-raped to death. This has ripped off a layer of silence that has gone on for 50 years in India. Now there are movements, there’s change, there’s judiciaries making decisions. That’s the difference today. These young women, Malala Yousufzai, Jyoti Pandey, Sahar Gul from Afghanastan, they’re on the front page of our paper. And the fascinating thing is they’re not leaving the front page. It’s as though they’ve become our daughters and people are staying on the story.

AM: Why do you think this change happened?

SA: Because the earth finally shifted, the reason I’m writing this book. It’s as though we’ve singing this song for decades. And then the economists came along and said, “My god, if you pay attention to the girl child, you’ll turn the economy of the village around.” And they explained how that would happen. And then, when Jeffery Sachs said that the status of women and the economy are directly related, where one flourishes, so does the other, when one is in the ditch, so is the other, this was big news. But it took even more than that. It took the women in the village to say, “What do you mean that’s my culture? What do you mean that’s my religion? Show me where it’s written in the Koran that my girl can’t go to school or I can’t go to work.” And they found out it’s not written anywhere. The gig was up.

AM: What do you want readers to take from this book?

SA: It’s always good if it leads to action. Canadian women are brilliant when it comes to this. For example, look at the Canadian Women for Women in Afghanistan, who are all volunteers. When they learned that the country could only afford to send so many children to school, they started Breaking Bread for Afghan Women. It’s a potluck supper — it’s so Canadian you could almost giggle. At the end of the night, they raise enough money for one teacher for one year. There are more than 100,000 girls going to school because of these women.