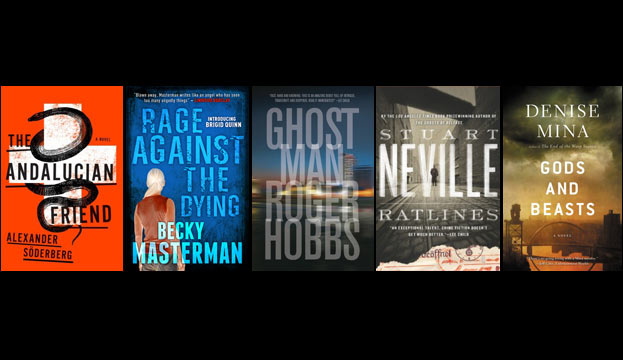 Die-hard mystery fans are always looking for their next fix. Almost half the fiction read in North America is classified as mystery, crime or thriller. If you’re looking for a hit of the good stuff, be sure to check out these killer titles.

THE ANDALUCIAN FRIEND BY ALEXANDER SODERBERG
The first in a trilogy – and from Sweden, the leading cultural exporter of literary thrillers – that finds a young widowed nurse at the centre of a global drug turf war after she falls for a charming patient. (Knopf Canada)

RAGE AGAINST THE DYING BY BECKY MASTERMAN
Masterman’s debut thriller is one of Publisher’s Weekly’s most anticipated books for the spring. Its compelling hero – a powerful older woman described as “a hot granny” by a would-be assailant – is Brigid Quinn, an ex-FBI agent forced into early retirement, who is haunted by the worst unsolved crime of her career, the murder of her protege. (Penguin Canada)
*Read a chapter of Rage Against the Dying.

GHOSTMAN BY ROGER HOBBS
“Jack Delton” is living an anonymous existence, a criminal in hiding after a failed heist. When a casino robbery goes horribly awry, leaving one man dead and the other on the run with the cash, Delton’s former associate calls in his chit. In a whirlwind race against the clock, Jack has 48 hours to find the money before it literally explodes. (Knopf Canada)

RATLINES BY STUART NEVILLE
The title refers to the escape routes used by hundreds of Nazis to flee Germany after the war; and Ratlines opens with a former Nazi being killed in Ireland, with a note pinned to his body threatening another. Albert Ryan, an investigator for the Irish Directorate of Intelligence (who also served in the British Army during the Second World War) finds himself in the morally ambiguous role of trying to solve the crime and protect a known Nazi. (Random House of Canada/SOHO Press)