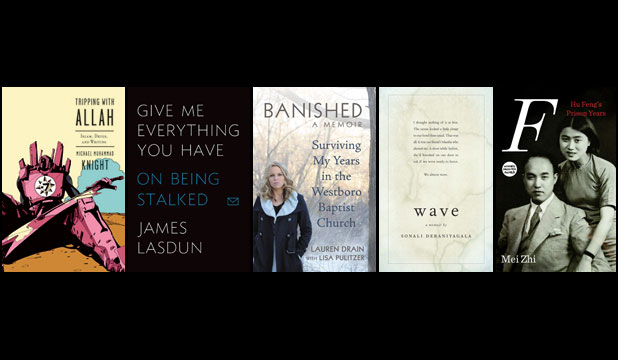 What’s the enduring appeal of the memoir? British novelist George Meredith called them “the backstairs of history.” A personal narrative gives readers access to worlds and experiences they don’t normally get to see. Beyond self-indulgent confessionals, the best memoirs – like the ones on this list – are powerful stories that resonate on an emotional level and highlight what is best and worst about the human condition.

Tripping with Allah: Islam, Drugs and Writing by Michael Muhammad Knight
Knight, who has been called the Hunter S. Thompson of Islamic literature, explores the effects of drug use on his religion by using ayahuasca (a psychedelic drug believed to bring you closer to the divine). Humour and honesty make Knight’s long “trip” worth reading about. (Soft Skull Press/Counterpoint)

Give Me Everything You Have: On Being Stalked by James Lasdun
A harrowing story of a teacher being stalked by a former student, who begins a virulent online campaign against him. Lasdun’s personal story is filled with wider, insightful meditations on madness, race, politics and the fragility of one’s reputation in the Internet age. (MacMillan)

Banished: Surviving My Years in the Westboro Baptist Church by Lisa Pulitzer and Lauren Drain
The first in-depth look at the Westboro Baptist Church, the controversial, anti-gay, anti-semitic, anti-everything organization that makes headlines by picketing funerals of soldiers and shooting victims. Lauren Drain, now in her late 20s, spent seven years inside the “church” (from the time she was 15) but was cast out by her family and the cult. (Grand Central)
*read an excerpt.

Wave by Sonali Deraniyagala
Sonali Deraniyagala’s devastating account of losing her parents, her husband, and her two young sons during the tsunami that hit Southeast Asia in 2004, which the author miraculously survived.(Knopf/Knopf Canada)

F: Hu Feng’s Prison Years by Mei Zhi, translated by Gregor Benton
A harrowing memoir of a Chinese dissident couple’s ordeal in Mao’s China. Hu Feng (a prominent Communist literary critic) was imprisoned for 25 years for “idealism,” while Mei Zhi spent seven years in prison for being his wife. After her release, she offered herself up for incarceration again to care for Hu Feng at the end of his life. (Verso Books)