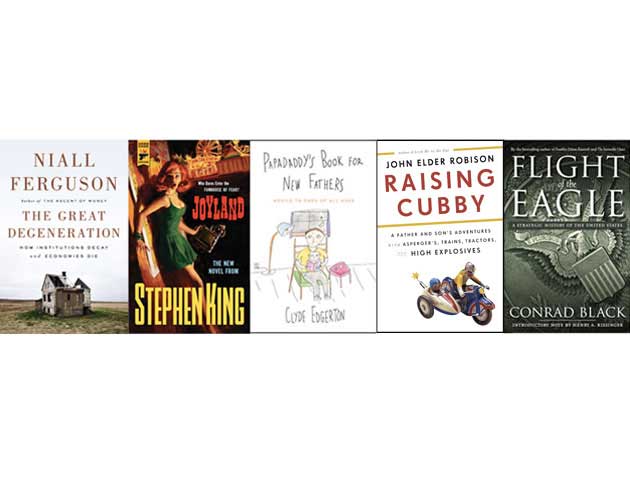 Does the man really need another soap on a rope? Wouldn’t he rather be enriched by the experience of a great read? Check out these Zoomer-approved titles.

The title says it all really. A compelling memoir of the unconventional relationship between a man diagnosed with Aspergers Syndrome at 40 and his son, Cubby — who is also showing signs of the condition and who at 17 finds his aptitude for chemistry can get him in a lot more trouble than either man bargained for.

Remind Dad of the lazy afternoons lost in the pages of a great pulp novel. This satisfying who-done-it is set in an amusement park and delivers a great ride. Of special note is that it is only available in hard copy — no E-book version will be available.

Flight of the Eagle by Conrad Black

Perfect for history buffs, Black’s tome looks at our neighbour to the south. Spanning from the New World through the outcome of the 2012 presidential election, it charts the rise of the world’s supreme power, its recent decline, its ultimate strengths and future promise.

Papadaddy’s Book for New Fathers: Advice to Dads of all Ages by Clyde Edgerton

Writing from experience — Edgerton calls himself a C.O.D (Considerably Older Dad) and has four children ranging in age from six to 31 years old — Papadaddy shares practical, humorous and comforting advice for dads (and moms) at all stages of parenthood.

The Great Degeneration: How Institutions Decay and Economies Die  by Niall Ferguson

Stimulate conversation with Ferguson’s treaty on the decline of the intricate frameworks of our society — representative government, the free market, the rule of law, and civil society.