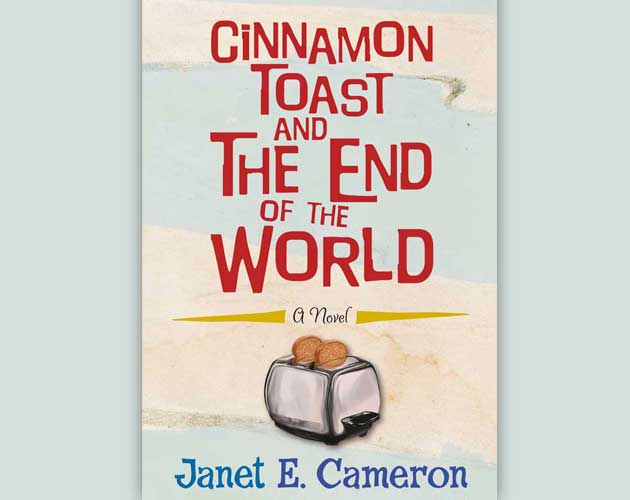 Janet E. Cameron is a Canadian writer living in Dublin. Her debut novel, Cinnamon Toast and the End of the World, is a hilarious and dark coming of age story set in rural Nova Scotia. It opens in 1987, when Stephen Shulevitz, a bright, socially awkward teenager, realizes he’s in love  – with his best friend Mark. Zoomer talked to the Canadian author about home-sickness, inspiration, and the importance of titles.

Zoomer: I understand you grew up in Nova Scotia. Was that why you set the book there and was there any resistance?

JC: I was homesick actually and living in Ireland – I’m still living in Ireland. I’d been thinking about home and I wanted to recreate it for myself. I didn’t think anyone in Ireland would go for it and I was surprised when it ended up published in Ireland. Nobody said change the setting because that would have been insane. My editor in Dublin said she connected to the setting quite a bit because she grew up in a small town in Ireland, and I’ve had other people say that about their small towns in other parts of North America. It’s a bit universal. And then for other people, it’s exotic.

Zoomer: One of the striking relationships is between Stephen and his father, Stanley. Were there any challenges in writing a father/son relationship?

J.C.: The thing about Stanley that was frustrating was that he wasn’t there. He leaves, he’s gone and then nothing Stephen can do or say was going to affect that person. I’m sure we’ve all had relationships like this – where a person just leaves and you want to engage them in some way. You want to have an argument with them, you want them to care about your life and they just don’t. This can happen with personal relationships. Anytime you realize that somebody matters more to you than you matter to them. It’s the same emotions. [I wasn’t] thinking about a father/son relationship in detail but how you feel when somebody just doesn’t care about you that much. You want to shake them, but even if you did, they wouldn’t give you anything back.

Zoomer: Were you inspired by current events when you wrote about Stephen being bullied?

J.C.: Around the time I was writing the part where he’s in high school and being bullied, there were a lot of news stories about kids that had been bullied to death. It wasn’t clear if these kids were gay, but they were accused of being gay. Do you remember that boy who hung himself in a barn somewhere in America? And there were other stories like that. It was around the time Dan Savage started It Gets Better. I was working on the manuscript then. I had a line in the book, when Stephen says to the little boy he’s babysitting, “It never gets better.” That was around the time Savage was starting that up, and I didn’t want it to sound like a commentary if I ever got published, so I changed that line.

The world does come into it. Whitney Houston died when I was drafting it, and there’s one point where Stephen is talking about how he hates “I Wanna Dance With Somebody” and I thought that could be read as a little mean.

Zoomer: The title is unusual. Where did it come from?

J.C.: Because I didn’t know it was going to be a book. I thought it was going to be a short story. That was the title of the short story. After a while, it became the book’s name. You can think of a better name for your kid later on, but she is Alice even if you think you should have called her Tammy. You can’t change your kid’s name. I also thought it fit because cinnamon toast is like home and comfort and good smells in the kitchen when your mother is making you something. And the end of the world is just the big changes that you go through leaving home and realizing that your life is never going to be the same again, that you’re never going to be a kid again. For Stephen, the end of the world is realizing that he’s in love with Mark and he can’t run away from it.

Zoomer: Was there ever any resistance to the title?

J.C.: My agent hated it. The first thing he told me when he said he would accept the book was that I had to find a better title. And I was mad because, as I said, you can’t change your kid’s name, so every title we came up with was okay but seemed wrong because it wasn’t the original title. I went through hundreds of them. I would draft lists and email all my friends. I even googled “find a title.” I finally came up with one which he didn’t think was that bad: The Next Time the World Ends. That was the one that the publisher bought the book on. I was talking to my editor, and she said she liked the title and I said, “You’ll never believe what the first one was – Cinnamon Toast and the End of the World.” And she  loved it and wanted to go with that. My agent actually sent her a letter but she wasn’t budging.

Win a copy of Cinnamon Toast and the End of the World by Janet E. Cameron!