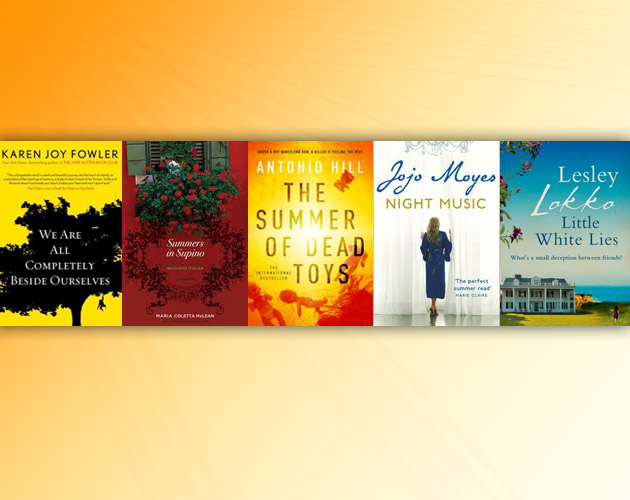 Whether you crave romance, family drama, or an edge-of-your-lounge-chair thriller, there’s something for you on our list to pack in your beach bag.

Night Music by JoJo Moyes
From the author of the beloved Me Before You comes another tale of transformation. When violinist and widow, Isabel Delancey, and her two children move to a run-down lake-side house in the country, it sparks the reawakening of old obsessions and jealousies in the small community.

The Summer Of Dead Toys by Antonio Hill
The first in a detective series set in Barcelona featuring Inspector Salgado. After the summer heat and a tragic death of a young witness drive Salgado to beat someone up, he is forced off his case of human trafficking and sent to investigate a teenager’s fall to his death. But he discovers the two cases might be related — and involve the city’s two most powerful families.

Little White Lies by Lesley Lokko
Three friends — the daughter of a famous actress and an assassinated president, the daughter of a financial dynasty, and the now wealthy daughter of a poor Russian immigrant — struggle to find their own happiness in this story of ambition, love affairs, and deception.

We Are All Completely Beside Ourselves by Karen Joy Fowler
While Fowler gave us The Jane Austen Book Club this book is a step in a different direction. The Cooke family may seem ordinary in every way — but for the fact that a chimpanzee, Fern, was once a member of their family. Told from the daughter’s Rosemary’s perspective, she guides us through the dark mysteries of Fern’s expulsion from their home.

Summers in Supino by Maria Coletta McLean
McLean’s memoir shares her experiences during summers in her recently deceased father’s ancestral village of Supino. The engaging narrative transports the reader to the simplicity and beauty of their life in Italy — where every occasion was a cause for celebration, restaurants didn’t need menus, and neighbors were treated like family.