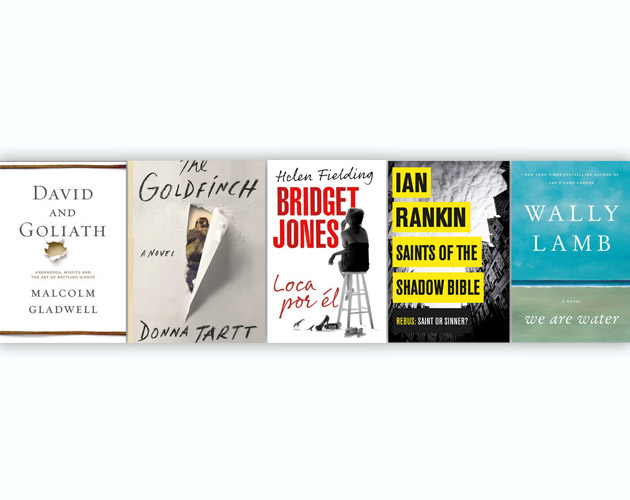 It’s already been a banner year for readers, with a new Margaret Atwood, another novel from the author of The Kite Runner, Khaled Hosseini, and even a surprise title from J.K. Rowling. But there’s much more to come. Here are just five of the books we’re looking forward to reading this fall.

1. Donna Tartt’s The Goldfinch starts with a young boy, Theo, surviving an explosion that kills his mother. In his grief, he becomes obsessed with a painting that reminds him of his mother and, as he grows up, he gets drawn into the art world (and underworld). Tartt fans who have been waiting for 11 years still have to wait until Oct. 22.

2. Beloved Scottish detective Inspector Rebus is back in Ian Rankin’s new book, Saints of the Shadow Bible. Rankin had retired Rebus in 2007’s Exit Music but, much to the delight of his dedicated fans, brought the cantankerous detective back in last year’s Standing in Another’s Man’s Grave. Saints of the Shadow Bible, which will be released on Nov. 7, find Rebus back on the force, looking into a 30-year-old case where his old team may be involved.

3. Not much is known about Malcolm Gladwell’s new book, David & Goliath, to be published on Oct. 1. The publisher’s description hails Gladwell’s ability to grasp connections others miss and says this new work “uncovers the hidden rules that shape the balance between the weak and the mighty, the powerful and the dispossessed.”

4. Helen Fielding’s long-awaited third Bridget Jones novel, Mad About the Boy, will hit shelves in mid-October. Not only is our heroine still on a diet and trying to kick the booze and the ciggies, she is armed with a mobile phone and a Twitter account.

5. Put your book club on notice. Wally Lamb, the author of two Oprah’s Book Club selections (She’s Come Undone and I Know This Much is True) has a new novel being released on Oct. 22. We Are Water follows the long marriage and break-up of an artist and her husband and the fallout after she falls in love with a woman, who happens to be her art dealer.