Five Great Books Coming to a Big Screen Near You 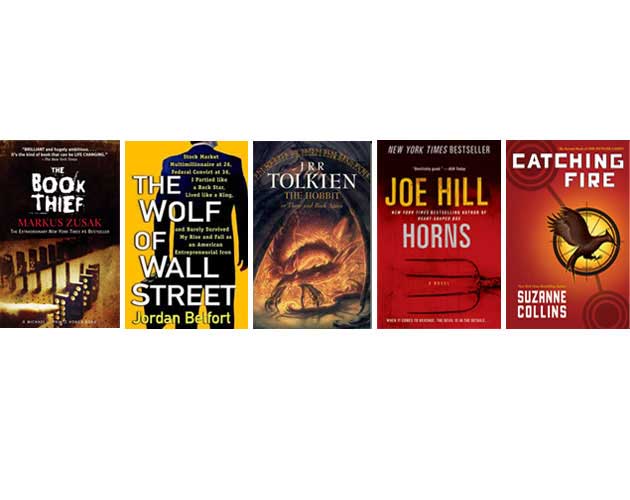 Book-to-film adaptations are polarizing and can make for the celebrated (The English Patient) and the reviled (The Scarlet Letter). While they often come with a built in audience of the book’s fans, there’s always the inherent risk of angering or alienating all those loyal readers. Regardless, books continue to be a constant source of material and inspiration in the film world. Consider these up-and-coming adaptations:

The Book Thief by Markus Zusak

Markus Zusak’s award-winning young adult novel The Book Thief, first published in 2005, tells the story of Liesel, a foster-child in Nazi-Germany who finds solace by stealing books and sharing them with others. The book spent over 230 weeks on the New York best seller list, which made film adaptation almost inevitable. The movie hits theatres this weekend and boasts a cast including Geoffrey Rush and Emily Watson, though most critics are focused on much lauded performance by Canadian teenager Sophie Nelisse, who plays Liesel and who won the Hollywood Film Festival Spotlight Award.

The Wolf of Wall Street by Jordan Belfort

Academy-award winning director Martin Scorsese brings Jordan Belfort’s 2007 memoir about his journey from living the high life as a wealthy stockbroker to his fall involving cocaine, crime, corruption and the federal government. Starring Leonardo DiCaprio, Matthew McConaughey, and Jonah Hill, it opens in theatres on Christmas Day. The book was published in 40 countries and translated into 18 languages and the movie is promising similar success, with DiCaprio’s performance generating award buzz.

The undisputed monarch of the book-to-movie adaptation is Stephen King, but son Joe Hill is continuing the tradition. His second novel, Horns, which was published in 2010, tells the story of Ignatius “Ig” Perrish. The lone suspect in his girlfriend’s murder, he awakens one morning with horns that influence those around him to confess their sins. Danielle Radcliffe (who can’t seem to stay away from literary adaptations, including The Woman in Black and a future role as Frankenstein) stars as Ig in Alexandra Aja’s film version of the book. The movie screened at TIFF and is rumoured to have a wide-release date in the near future.

One of the most anticipated movies this fall is Catching Fire, the second installment in the film adaptation of Suzanne Collins dark dystopian trilogy The Hunger Games. Whether you’re on Team Gale or Team Peta, or simply love the tale of teenage warrior Katniss, fans will be happy to hear that the film is faithful to its source material. The first film reportedly earned $152-million on its opening weekend, but given Jennifer Lawrence’s rising stock, the second should do even better. The film opens on November 21.

The Hobbit by J.R.R. Tolkien

Peter Jackson’s adaptation of The Hobbit has stretched the classic masterpiece into three movies. The second installment, The Desolation of Smaug, finds Bilbo Baggins in possession of a mysterious and magical ring (aka “Precious”) as he, the dwarves, and Gandalf the Grey, continue their quest to reclaim Erebor, the dwarvish homeland, from Smaug. While the director’s earlier adaptations of Tolkien’s Lord of the Rings trilogy drew much praise and generated their own fandom, readers have been grumbling about this new franchise. That won’t stop legions of them from attending screenings when it hits theatres on December 13th, including those eager to hear Benedict Cumberbatch as the dragon Smaug.