In Conversation with Author Ian Rankin 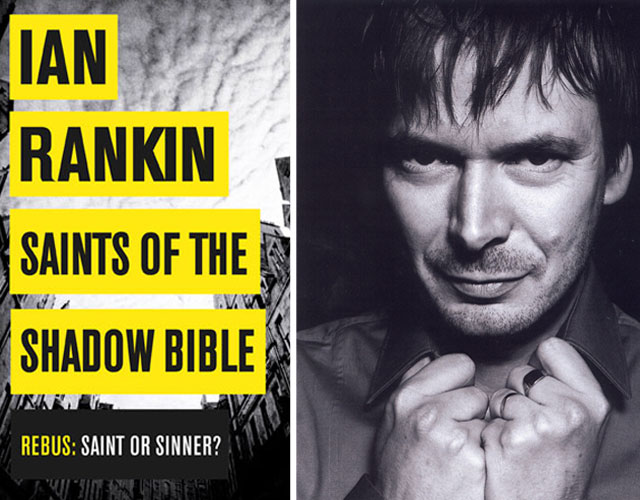 Enter to win a signed copy of Saints of the Shadow Bible by Ian Rankin!

If you can’t tuck into a pint at the Oxford Bar with crime-writer Ian Rankin, then breakfast overlooking Victoria’s inner harbour isn’t a bad substitute. Zoomer recently had the opportunity to sit down with the creator of the much-loved Rebus books as he toured to promote the latest installment in the Rebus canon, Saints of the Shadow Bible. Over coffee — in lieu of pints — the talk jumped from music to travel, to literary inspiration, to life away from writing.

On being a frustrated rock star:
The amusing distraction of the Titanic soundtrack playing over the restaurant’s loudspeakers leads to a conversation about the music in his books. Rankin says he lets the character dictate the choices. “Rebus is a slightly different generation than me; I’m in my early fifties, he’s in his early sixties, so I always have to make sure that it is his musical taste,” he says. “Some of it matches mine, some of it doesn’t. The fact that there is music in the books, there are several reasons why I did it. Number one, like a lot of guys my age (not just guys), I’m a frustrated rock star —I would much rather be a rock star than a writer but I had no ability whatsoever; number two, I think it tells you a lot about the character. The kind of music he choses to listen to, even if you’ve never read a Rebus novel, you’ll get a sense of what kind of guy he is. He’s not gregarious, he’s not listening to party music, he’s listening to soulful, thoughtful music: Leonard Cohen, early Stones, a bit of Van Morrison, and that kind of stuff. So you start to get a sense of that blue collar guy — because he prefers the Stones to the Beatles — and he’s introspective because he’s listening to Van Morrison and Leonard Cohen. He’s not a party animal. You get a sense of his age, his background, and his philosophy on life just from the music he listens to.”

How he got to cut that album:
Having so much music in the books has led to musicians becoming fans. “I’ve had emails from Pete Townsend of The Who,” Rankin says. “There’s one musician I mention in the books, Jackie Leven, a Scottish singer-songwriter, we became great friends. The last two titles came from his stuff. We worked together, we made an album together — so I finally did get make an album — we toured. He died suddenly three years ago, which was why I named the previous book [Standing In Another Man’s Grave] after one of his songs and I decided to do the same with this book to keep the memory alive.”

On the influence of The Strange Case of Dr. Jekyll and Mr. Hyde:
When fans meet Rankin, they’re often confused by his amiable demeanor. “They’re expecting this guy who is dark, conflicted, dangerous, complex,” Rankin says. “Not like me at all. Rebus is my alter ego, he’s my Mr. Hyde.” That literary reference is an important element of Rankin’s career. “That was how I started writing,” he says. “I was never a crime fan. I didn’t read crime fiction, I’m the only crime writer I know who wasn’t a fan of the genre before he started writing it. What I wanted to do was update the theme of Jekyll and Hyde and show how Edinburgh should have been the setting. Dr. Jekyll and Mr. Hyde was written by an Edinburgh novelist but he chose to set it in London. I don’t know why, because it’s a very Edinburgh book. You’ve got good and evil in the same person and even contemporary Edinburgh is like that. On the surface, its seems very calm, cultured, and civilized but underneath there’s a lot of stuff happening that’s hidden from public view.”

How to be a villain in a Rebus book:
When I joke that the missing audio clips of Rankin singing in a rock band as a teenager could be a great fundraising item for charity, he offers a better option. “Six or seven times per book, I auction off the right to be in the book for various charities that ask,” he says. “At some big charity ball or dinner, one of the prizes will be immortality by being a character in a novel. And it’s fun because then you get in touch with the person and ask what she wants to be. ‘Do you want to be yourself, a cop, a villain.’ One woman paid for her cat to be in the book. One business woman in Scotland wanted to be a high-class madam in a brothel. I didn’t have a place where I could put a brothel so I made her a stripper instead. She was quite happy with that — I checked with her first.”

On finally taking that break:
A few years ago Rankin said he was going to take a break from writing. Instead he wrote a screenplay (for a film yet to be made), a libretto for an opera, a graphic novel, and lyrics for a rock band. He claims that when this book tour for Saints of the Shadow Bible is complete he’s actually going to take a “proper” break. “I going to sit and recharge my batteries and think about what I want to do next,” he says. “Now I’ve got some money in the bank and the kids are grown up, my wife and I want to do some traveling.” When I say he’s living the Zoomer lifestyle, he agrees. “This is it. Exactly.”