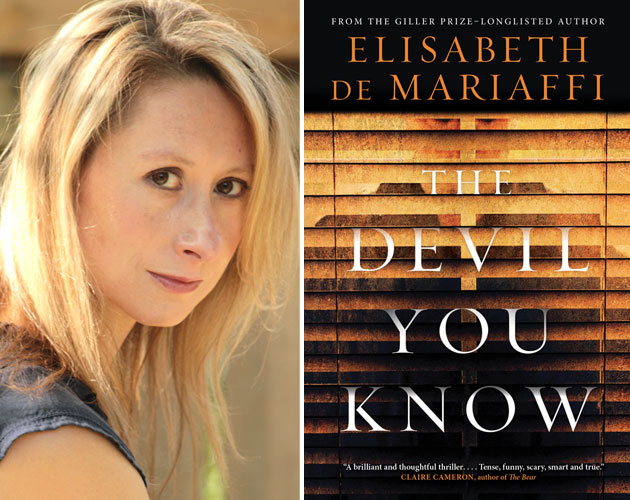 Here, we chat with the St.  John’s-based author about her new book, tragic events from her own life that inspired her – and about pushing back her fears

Elisabeth De Mariaffi’s first book of short stories, How to Get Along With Women, was longlisted for the 2013 Giller Prize. Her debut novel, The Devil You Know, is a tense literary thriller that follows Evie Jones, a rookie reporter working the crime beat when Paul Bernardo is arrested. As she covers the story, she is haunted by the murder of her childhood friend and becomes convinced that the man stalking her may be the killer coming back for her.

Zoomer talked with the St. John’s-based author about her respect for the subject matter, tragic events from her own life that inspired her, and about pushing her fears.

One of the touchpoints among readers of The Devil You Know has been how well you explore the fears we have as women, just moving through the world day to day. How difficult was it to let yourself fully explore that?

It’s funny because I’ve spent so much time trying to train myself not to do that; not to hit that anxiety cycle all the time, and here I am writing this book. Once I was into the editing stage — all the things I had worked so hard to overcome about trying to make rational decisions about when I’m safe and when I’m not, as opposed to emotional decisions — I had really back pedaled. It was just because I was dealing with it everyday. Everyday I would sit down and think about those moments, and those moments at different ages. How do you feel unsafe when you’re 11? How do you feel unsafe when you’re 18?

And what kind of messages are being thrown at you? There’s that scene when Evie is sitting in the underground parking garage and she’s rhyming off these statistics: “I’m more likely to get raped if I have a pony tail and I’m less likely to get raped if I’m carrying an umbrella.” I actually got that from my daughter, who was 15 at the time, and she got it from Seventeen magazine. Every teenage girl at some point reads Seventeen. It’s baseline media for teenagers. And that was the message being thrown at her: it was like a “How Not to Get Raped” article. And at 15, she was easily able to throw these points out. I thought, how exhausting. What an energy drain this is for women, that part of our brain is constantly storing this. And we do. That true crime aspect: why are women such big readers of true crime? They’re actually doing studies now that are showing that women admit they’re reading it to figure out how to avoid being in that situation, how to get away.

What were your concerns about using the early days of the Bernardo case as the framework for the book?

I did wonder about it —I wondered about all these things: about using my own experiences as the friend of someone who went missing. And translating that into fiction. What I keep trying to tell people, is that the media is going to keep trying to boil it down to the simplest definition. It’s not really a book about Bernardo. That’s the set piece and I actually think it’s an important set piece. There are no gory details in the book. We’re not focusing on those crimes. But historically, it’s something we’ve barely talked about. And I think we’ve barely talked about it because it was really traumatic. What I did find, was that after the sale of the book — which did get some press in arts media — I started to get emails and messages from women I didn’t know who all basically said the same thing: “I’m so glad you’re writing about this — can we finally talk about this now?”

Because I had harboured these concerns about how it would be perceived, that was a huge vote of confidence. I think that’s exactly what the book is trying to speak to. That there is a huge segment of society that was traumatized by this and then we stopped talking about it because there was all this weirdness around the trial (which doesn’t even come into the book because we didn’t know any of that stuff in the real-time of the book.) So, everybody just stopped talking about it. Except that this was one villain in the Toronto area, who for 10 years had a huge impact on women and their perception of their own safety and their fear. So, I think it’s important to talk about.

You’ve been vocal on social media and other outlets about the way women are portrayed in the typical serial killer book. How did you want this to be different?

There are a few things. I really wanted to take the focus off the sensational aspects of the stories. As a writer, I wasn’t interested in using details of the crimes. I don’t want to traumatize anybody — I don’t even want to traumatize myself! I don’t have a huge ability to read details of stuff like that. I can’t even watch horror movies. That’s not the way I’m going to write anything.

It was so important to me to give Evie so much agency and I spent a lot of time thinking about that. I love the part of Evie that is just a fighter. She’s been through this and had this childhood that traumatized her, but she’s coming out fighting and she’s finding her own way to do it. So that was really important to me.

And the other thing was to make sure that the girls stories were told. In the course of writing the book I ended up having to do quite a bit of the same kind of research that Evie does [into the missing girls from the 80s]. As I did that, I wanted to make sure that the girls’ stories were in there and that the loss of the girls was what was being focused on, rather than the sensational sex crime stuff that I think is usually the focus in some cases. In this way, I wanted the book to do the work of elegy. That’s why these girls are in there and they are named by name. I don’t want them to be forgotten.

You’ve said in other interviews that the book was partly inspired by your own childhood friend’s murder. I imagine that in the course of your research, that case came up. Did you try to stay away from those documents?

No, I need to do that as well. I was only nine when [Sharin’ Morningstar Keenan] was killed and my memory of it is really imperfect. That experience of discovering how imperfect my memory was really informed how I wrote Evie. Memory is such a pastiche. I have some true memory of when I was nine — not only that incident, but of all things, but especially that. Also I’ve seen photographs and been told stories by adults that have incorporated into my memories. So much of what we think of childhood memories is a combination of those things. They collage together. That’s certainly what happens to Evie in the book and that was what happened to me. I was really interested in the fact that when I went back to look at the details, I realized I knew very little of the true story and I had to learn it, as an historian, again.

In a way, your book defies genre: It is very literary but it has a strong element of a thriller to it. Are you surprised by the readership you are getting — is it a broad spectrum?

It is broad and I like that you’re saying that. I think the trickiest thing about trying to describe the book, is that it does kind of defy genre. But I think we can have great friction between literary work and genre work. I think that can create great momentum and it feels very progressive. It was a really exciting book to write because I got to include that thriller piece in it, which is important to me.

The reception of the book was overwhelming positive … I get a lot of personal messages from readers I don’t know. Sometimes they are telling me their own stories about times they were scared.

One of the nicest things is that I get a fair number of messages from men. The responses from men — the ones who have chosen to get in touch with me — have been saying they think this book is really important.

Enter for your chance to win a copy of The Devil You Know!