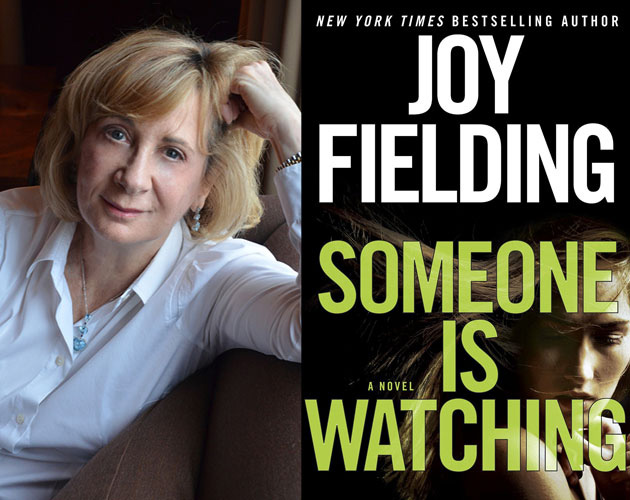 In the chilling thriller, Someone Is Watching, a private investigator struggles to find her attacker after a brutal attack on the job. Joy Fielding’s 25th novel is a modern take on Hitchcock’s Rear Window and explores the idea that in today’s world, our every action is being observed.

Zoomer talked with the best-selling author about the importance of setting and character, the necessary care when writing about sensitive subjects and the influence of Hitchcock.

Miami was described so vividly. What drew you to this setting?

Miami itself is very vibrant, young city. It’s not a city I feel particularly comfortable in anymore, but that’s one of the reasons it worked so well as a setting. There is just something very alive and vaguely threatening about the city. I also wanted somewhere hot and where there was a very active night life, with clubs, and a beach scene. And with all its towering glass buildings everywhere, Miami just worked.

I find Florida works really well as the setting for a suspense novel: It looks so perfect on the surface, so beautiful, but if you look a little deeper, there’s the alligator in the bushes, there’s a snake by the shore, and there’s the constant threat of hurricanes. It has an underlying current of menace. That’s what I wanted to have as the underbelly of the story.

The book has a definite Hitchcockian vibe to it — was that an influence?

I think anytime you are telling a story where one character is spying on another, you’re thinking of Rear Window. I wasn’t interested in retelling Rear Window but I wanted to tell a story of somebody watching — because we live in this society now where literally someone is always watching. You know that if you do something in public there is going to be someone, somewhere taking a video of it. There always seems to be somebody taking a picture or watching or videotaping everything you do. I thought it would be very interesting to tell this story of this woman who does this for a living. As a private investigator, she spies on other people. Something terribly traumatic happens to her and she is attacked on the job, which makes it all the more awful, because it was the place she felt the most safe. When she retreats to her glass house in the sky, because she lives in this glass condo, she’s not ready to face the world and the only way she can do it is through the tools of her trade, which in this case is her binoculars.

The original idea, the germ of it, was just the idea, that someone is always watching what we do.

It makes for a great title. Did you always know you’d call it that?

It’s funny because my original title when I was writing the book was Glass Houses, as in people who live in glass houses shouldn’t throw stones, or whatever the expression is. But then, Glass Houses doesn’t really make you want to pick up the book. I thought, let’s give a little more emotional pull here. What would work? Someone Is Watching just seemed like the natural thing.

The attack on Bailey could be considered sensitive for some. How do you feel about trigger warnings?

You never know what’s going to affect someone who is reading and you can’t shy away from something because of that. I tried to write it so that, one, it’s not too graphic, and two, that it’s definitely not titillating. I’m not seeking to arouse anybody by describing something so horrible. What I really wanted to do was emphasize the horror of what was happening and the sense of helplessness and fear. Then, really deal much more with the trauma.

There are so many books, shows and movies where something like this happens and the heroine basically shrugs it off. Or in the next episode she’s out there fighting crime again, or getting herself into all sorts of dangerous situations. I think, “no,” anything I’ve ever read about victims of this sort of assault, they’re not so quick to recover. And even when they do, it certainly affects everything that happens to them for the rest of their life. I would assume it would affect every decision you make and influence how you judge people, how you react, how you carry on in your life.

So, to me, this is a pivotal event in anybody’s life and I think so many books, shows, movies, and things like that, deal with it as something that is traumatic but something that one gets over really quickly and moves on. I don’t think that’s how real life works. Primarily this is a suspense story about Bailey dealing with this trauma and trying to discover who attached her. This is what she does for a living and she can’t solve the biggest mystery of her own life and that’s what is particularly frustrating for her.

Much of this book is told in very close first person from Bailey’s perspective. How do you create a character like her?

It’s always hard to say where they come from. In this instance, I had the idea about a young woman who was attacked on the job. And then I had to start thinking: Who is this woman? What’s her family like? One thing leads to another. Really, if you want to create a successful character, they can’t be 30 years old when they’re born. They have to have a history. You have to know this character from even before they were conceived. You have to know who their parents were and what kind of relationship they had and whether this child was loved or neglected or abused. All these things. And so I got quite involved in this whole character— this whole cast of characters — and one thing lead to another and it gave me a very good sense of who Bailey was. If I just said, “Bailey is 29 and she has these brothers and sisters,” but I didn’t have a good sense of who they are, then Bailey was never going to be a real character to the reader. She’ll always be a cardboard figure. It’s really important that I know who she is for the reader to know who she is.

Enter to win a copy of Joy Fielding’s new thriller, Someone is Watching.