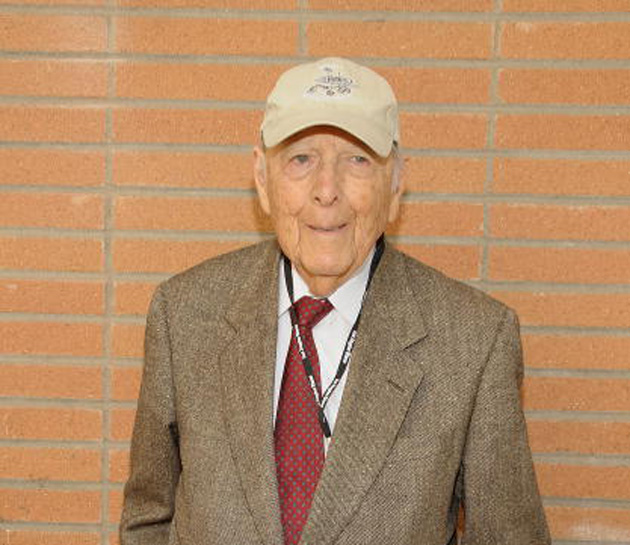 Herman Wouk, the author of The Caine Mutiny, Marjorie Morningstar, The Winds of War and many other beloved novels, is turning 100 today.

But he’s giving us a birthday present — a memoir, his first, titled Sailors and Fiddlers, available in December.

Wouk wrote his first novel, Aurora Dawn, while at sea in the Second World War. He took part in eight Pacific invasions while in the U.S. Navy.

“I’ve lived to a great age, and for that I thank Providence,” Wouk said in a statement released by his publisher Simon & Schuster. “To the readers who’ve stayed with me for the long pull, my warm affection, and I hope you’ll enjoy the light-hearted memoir about my writings, Sailor and Fiddler.”

Wouk won the Pulitzer Prize for The Caine Mutiny, based on his own experience and published in 1951. It topped the New York Times bestseller list for 47 weeks and was made into a movie considered a classic starring Humphrey Bogart.

In the novel, a character who’s an aspiring writer and junior officer, like Wouk, says, “The navy is a master plan designed by geniuses for execution by idiots. If you are not an idiot but find yourself in the navy, you can only operate well by pretending to be one. All the shortcuts and economies and common-sense changes that your native intelligence suggests to you are mistakes. Learn to quash them. Constantly ask yourself, ‘How would I do this if I were a fool?’ Throttle down your mind to a crawl. Then you will never go wrong.”

His most recent novel The Lawgiver – published three years ago – was described in the New York Times as “startling in its modernity”.

“[It] weaves a comedic yarn using letters, text messages, memos, Variety articles, emails and Skype transcripts. An epistolary novel, he decided, was the only way to tackle a subject he had spent decades trying to crack: Moses.”

But it’s his tale of a young woman’s coming-of-age in Marjorie Morningstar that many women who grew up in the ’50s and ’60s will always associate with Wouk.

He wrote, “She had learned from her encounter with Mike Eden that there really was more than one man in the world — the piece of knowledge that more than anything else divides women from girls.