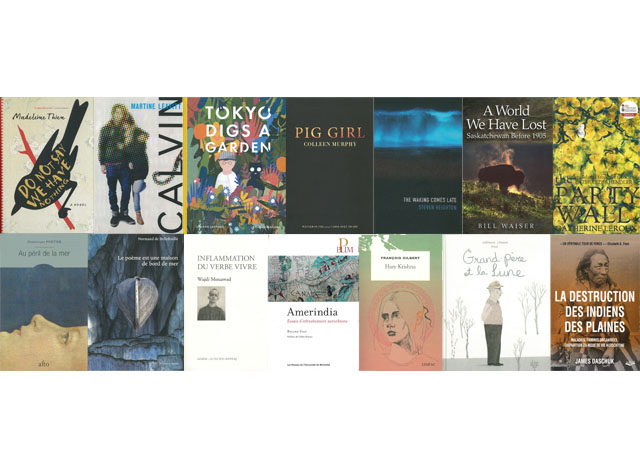 In what is likely only the beginning of a celebratory few weeks for Canadian author Madeleine Thien, the 42-year-old was announced this morning as the winner of the 2016 Governor General’s Literary Award (English Language) for Fiction for her novel, Do Not Say We Have Nothing.

Set amidst the 1989 Tiananmen Square protests, the novel examines both the lives of two generations of a Chinese family and the tenuous political climate of the time. The jury, made up of authors Jaspreet Singh, Mary Swan and Sara Tilley, called the novel, “an elegant, nuanced and perfectly realized novel that, fugue-like, presents the lives of individuals, collectives, and generations caught in the complexities of history. Tracing the intertwined lives of two families, moving from Revolutionary China to Canada, this ambitious work explores the persistence of the past and the power of art, raising meaningful questions for our times.”

“The G-G is the prize that’s closest to my heart,” Thien told the Globe and Mail. “Because of its age. Because of the way it’s shaped our thinking about Canadian literature—about what we read, how we read, how we imagine ourselves. So to be included on that short list was a huge deal for me. It’s the short list that made me cry instantly.”

The coming days and weeks could bring more tears of joy for Thien, who is also shortlisted for the prestigious Man Booker Prize—the winner of which will be revealed later today—and the ScotiaBank Giller Prize, which announces their winner on Nov. 7. Thien also won the Amazon.ca First Novel Award for her 2001 debut Simple Recipes, a collection of short stories that Canadian literary legend and Nobel laureate Alice Munro called, “surely the debut of a splendid writer. I am astonished by the clarity and ease of the writing, and a kind of emotional purity.” Thien, who has published five books of fiction, has been nominated for and won numerous other literary awards. As the Toronto Star noted, with a Man Booker win later today Thien could join Michael Ondaatje, whose The English Patient won both awards in 1992, as the only two Canuck scribes to pick up both prizes in the same year.

The Governor General’s Literary Awards, presented by the Canada Council for the Arts and celebrating its 80th anniversary this year, bestows honours in seven different categories in both English and French, with each category adjudicated by writers in that discipline and with each carrying a $25,000 prize. The combined shortlists for each category include 68 finalists.

The other 2016 English winners are:

Non-fiction: Bill Waiser, A World We Have Lost: Saskatchewan Before 1905

The French language winners are:

Past winners of the award include Gabrielle Roy, Morley Callaghan, Margaret Laurence, Mordecai Richler, Robertson Davies, Alice Munro and Margaret Atwood. Canada Council for the Arts Director and CEO Simon Brault called 2016, “an excellent vintage for the GG Awards—full-bodied, nuanced, and sure to satisfy the palates of a discerning public eager to discover new and meaningful worlds. Once again, we have the privilege of celebrating the power of literature to question who we are and what we aspire to be.”

The winners will receive their awards from His Excellency the Right Honourable David Johnston, Governor General of Canada, at a Rideau Hall ceremony on Nov. 30.