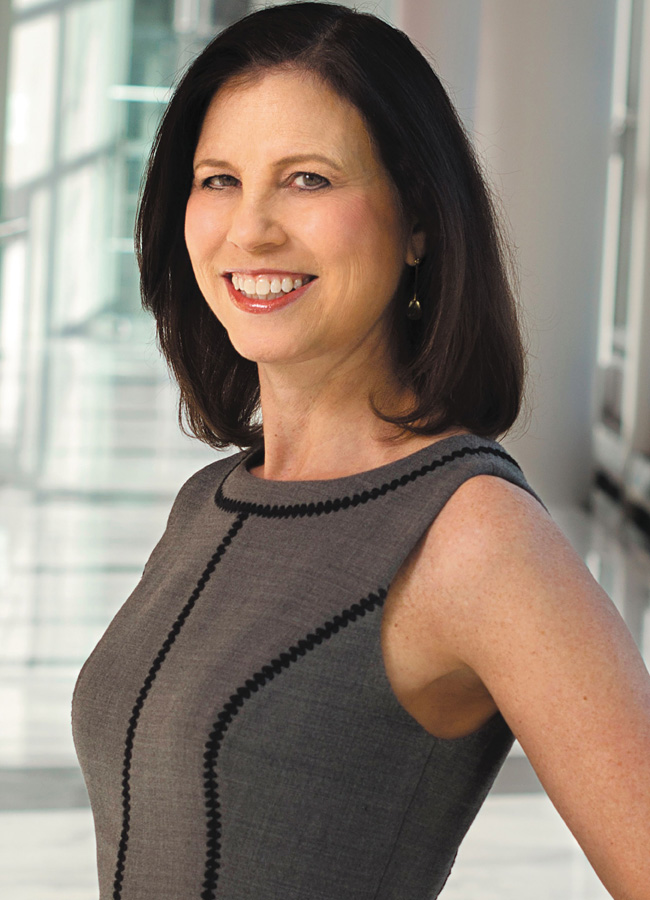 Joanne Lipman’s timely new book, That’s What She Said: What Men Need to Know (And Women Need to Tell Them) About Working Together (William Morrow), takes a close look at gender inequality in the workplace.

One glance at Joanne Lipman’s resume tells you all you need to know about the 56-year-old’s rise through the American media landscape —  intern at the Wall Street Journal, eventually becoming its first female Deputy Managing Editor as well as the publication’s Editor-in-Chief; first Editor-in-Chief of Conde Nast Portfolio and its website, Portfolio.com; Editor-in-Chief of USA Today and its entire print network; and, most recently, Chief Content Officer of USA Today publisher, Gannett.

Her latest project, however, delves beyond media brand to explore the attitudes that prevail in boardrooms and offices around the world. Her new book, That’s What She Said, focusses on closing the gender gap in the workplace, approaching the issue from an unconventional angle — calling for more men to enter the conversation. “There are a lot of issues that women face at work that [they] talk about amongst themselves all the time — things like feeling overlooked or marginalized, underpaid, not given the same opportunities or the same respect as the men they worked with,” Lipman told me during a recent phone conversation. “So more than three years ago I wrote an article for the Wall Street Journal called ‘Women at Work: A Guide for Men.’ I felt like women talking to each other is half a conversation and the only way we’re going to solve the problem is to bring men in. Half a conversation, you solve half a problem.”

MIKE CRISOLAGO: You started writing this book three years ago, after publishing your Wall Street Journal piece, and given the current social and cultural climate it’s taken on a whole new level of relevance.

JOANNE LIPMAN: Right, exactly. In the wake of the #MeToo movement there has been this explosion of interest in this topic because what we’ve done in the media these past few months is expose this problem of sexual harassment in the workplace as an endemic, systemic issue. And now the question becomes, what next? How do we solve it? And That’s What She Said is solutions oriented. And the problem isn’t limited to sexual assault, but a workplace environment that tolerates harassment is also going to be a workplace environment that doesn’t respect women, that doesn’t promote women, doesn’t give them the opportunities and so what the book is looking into is all of these different issues about pay and promotion and respect.

MC: And you recall your own personal experiences in the book, like when you got a new office at work and one of your male colleagues noted it was smaller than all the men’s offices. And you at first thought, ‘So what? I’m in an office, I should be happy,’ not realizing the underlying culture of what that’s saying.

JL: I would say that every single pitfall that is mentioned in That’s What She Said has befallen me. So I’ve kind of lived on both sides of this. And I’ve learned a lot along the way. What I learned from that [office size] experience is men who negotiated for a larger office also negotiated for more pay. I didn’t know that was a thing. And the same thing with promotions – I was really surprised, when I became a manager, how many men asked for promotions. And the women did not.

And also so much of the research and the stories [in the book] apply to other underrepresented groups, ethnic and racial minorities. I’ve also heard from a lot of introverted men who said ‘What you’re writing about actually applies to me as well.’

MC: And boomers, in some cases, might fit into that category too, right?

JL: I actually have an entire chapter called “The Invisible Women” and it’s about boomer women, essentially. There’s so much focus right now, which there should be, on maternity and paternity leave and on policies for new parents. But what about those parents who may be dialled back or even left the workplace when their children were younger and now they’re empty nesters and they’ve got all this energy and ambition and experience and no one will hire them? They’re invisible. And this is particularly true for women. And you hear a lot about boomers who become entrepreneurs – particularly female boomers – and a lot of the reason that happens is because they can’t get back into their industries. And it would add tremendously to the economy if we would actually not allow these people’s talents to go to waste.

MC: What advice would you give to boomers, some of whom enjoy a long tenure at their job, who perhaps are now recognizing these issues in their workplace and want to facilitate change?

JL: In the book I have a cheat sheet at the end that looks at specific things you can do in your workplace. For example, women are interrupted three times more than men are. All the research shows this. So there are things that you can do. Anyone in a meeting, if a woman or someone is interrupted, could say, ‘Wait a second, she was speaking. I’d really like to hear what she has to say.’ Similarly U.S. President Barrack Obama, like Justin Trudeau, had more women in his administration than previous administrations, or subsequent administrations, but still they were a minority and [felt] that they were bulldozed by the men. And so they came up with this plan called amplification and the idea was that if one woman said something, another woman would repeat what she said and give the first woman credit for the idea. And that did two things. One, it made sure that the woman’s idea was heard, and two it made sure she got credit for it. The reason that they did this was because the research actually shows what every woman has experienced, where she says something and it seems like nobody has heard it and then two minutes later a man repeats exactly what she just said and everybody in the room is like, ‘Oh my gosh, Bob, what a great idea you had.’ And Bob’s a genius. So the idea of amplification is the woman who initially said it gets the credit.

There’s another tactic called brag buddies that some women have employed because again, women who talk about their own achievements are considered brash, boastful and abrasive whereas men who talk about their own achievements are considered really smart and accomplished and likable. So some women in a consulting firm created a little cheat that they call brag buddies. And in brag buddies, one woman tells the other about her accomplishments, the other woman tells the first woman about her accomplishments and then each goes and brags about the other to the boss. So there’s different ways that people can kind of get around this essentially ingrained sexism. Most of what we see in offices now is not overt sexism. It’s mostly unconscious bias, biases we all have deep inside us that we don’t even know exist. And women have them against other women.

MC: I imagine a lot of men who see your book would feel relieved that they can be part of the solution instead of being part of the problem, but what reaction have you received from women about your book?

JL: Their reaction has been really strong. There’s this broad base interest in solutions, and also for men as well. Women are over the moon enthusiastic because it really is very practical and gives you a lot of solutions and it also documents the problems. There are so many things that happen to women where we just figure it’s our fault, or it’s only us. I always thought I was the only woman who people didn’t seem to pay attention to in a meeting. But it turns out it’s all women. So first of all, good to know it’s not just you. And then we present solutions.

And when I go into live events I see a lot of men in the audience, especially younger men. And I think for the men anything to do with gender generally [makes them] clam up and not want to talk about it. They’re afraid and there’s actually research in [the book] that shows the 74 percent of men who were polled said that one of the reasons that would prevent them from championing women and equality was fear of saying the wrong thing. And what I hope to do with That’s What She Said is to take away the fear. We’re seeing many more men engaging not in a defensive way at all, but really curious, interested, asking questions and wanting to be part of the solution.

That’s What She Said is available in stores and online.