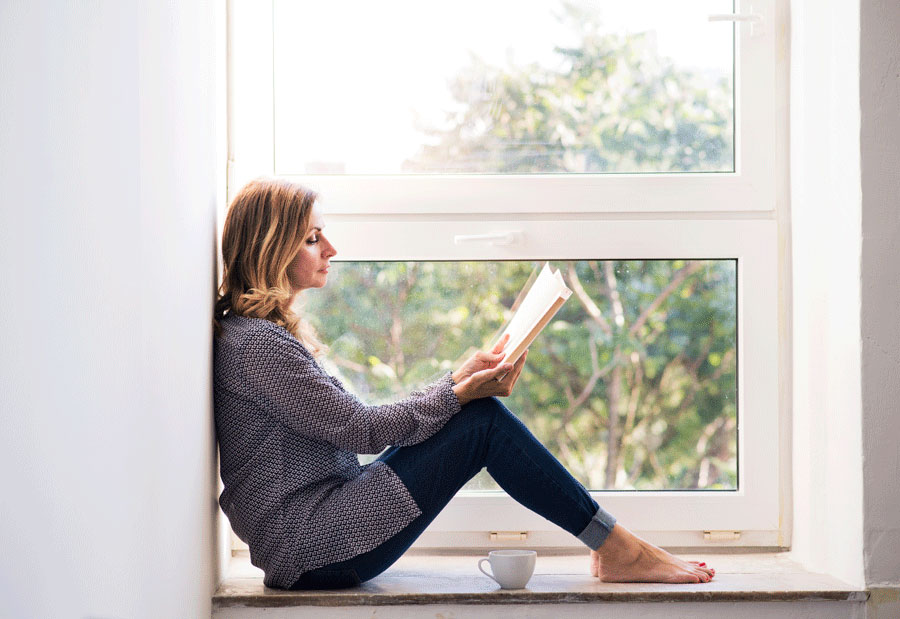 It’s a new year and a new decade. Renewal is in the air, and there’s no better time to arm yourself with the best health and wellness books of the last 10 years. From living better longer to changing your outlook to eating like the happiest people on Earth — and running like the fastest — we’ve got the self-improvement reads you need to start 2020 off right.

As the 2010s marched on, we learned that wellness wasn’t just about extending lifespan but health span, too. Superstar scientists stepped forward as the new lifestyle gurus, and STEM (science, technology, engineering and math) captured the public’s imagination. Integration is now taking care of mind, body and spirit — so the books that came to the fore demonstrated. At the same time, science became sexy in part because of the tech revolution, which has its own futuristic implications on well-being. It all made for a bounty of must-reads for better health and wellness. Here, our picks for the 10 best I’ll have what they’re having! It’s been 11 years since journalist and National Geographic explorer Dan Buettner blew the lid off on the world’s healthiest, happiest and oldest people with his book The Blue Zones. These hot spots of human longevity (five regions in Japan, California, Costa Rica, Italy and Greece) have the highest concentrations of centenarians, but that’s not all they have in common. Although culturally and geographically distinct, Buettner has spent more than 20 years now honing in on the formula that leads to these “fountains of youth.”

Common traits include having a sense of spirituality, staying physically and socially active and taking time to de-stress. And then there’s sustenance. With his fourth and latest Blue Zones title release in December, Buettner’s interest turns culinary with a cookbook full of healthy recipes and tips collected from the remarkable older adults he’s met. It includes everything from making tastier beans — a plant-based protein staple — to a simple generations-old vegetarian pasta. No, it’s not entirely meatless, but eating less meat is one of the nutritional secrets to longevity he’s discovered. Bon appétit! A geneticist and professor at Harvard Medical School, Sinclair has been on Time magazine’s 100 Most Influential People in the World list for his work on prevention and reversal of age-related disease and deterioration. He’s confident we can live healthier for longer — that is, we can increase our health span, and his first book offers a compelling prescription — including how an antioxidant in wine and chocolate can help. A little stress on the body can also go a long way, and that includes intermittent fasting, as Sinclair explained in an interview with Zoomer this past fall. “Your body should be a bellwether, and your doctor should let you know if fasting is fine. But if you are in good health, I really couldn’t recommend anything better for long-term health than being hungry a little bit during the day.” 3. The Whole-Body Microbiome: How to Harness Microbes―Inside and Out―for Lifelong Health by B. Brett Finlay and Jessica Finlay (2019)

Over the last decade, we’ve seen the shift from “anti” to “pro” where it concerns the bacteria that make our bodies home. And a healthy microbiome, as it’s called, is being linked to everything from improving cholesterol to reducing dementia risk to extending lifespan in general (a robust and diverse microbiome happens to be another common trait among people living in Blue Zones).

Especially important is the discovery that, after age 65, this collection of microbes “goes off a cliff in terms of composition,” says co-author and Canadian microbiologist Brett Finlay. Considered one of the foremost experts on the subject (and co-author of 2016’s Let Them Eat Dirt: Saving Our Children From an Oversanitized World), he spoke to Zoomer about his second book about tending to our microbiome. The good news? No matter your age, beneficial bacteria love healthy lifestyle choices like exercising and eating a diet full of fruits and vegetables. With his finger on the latest findings, Finlay has more on these and other tips for being a five-star host.

RELATED: Bacteria In Our Gut Could Be Key To Increasing Longevity 4. The Sleep Revolution: Transforming Your Life, One Night at a Time by Arianna Huffington (2017)

More and more research links insufficient and/or poor quality sleep to chronic disease, cognitive decline and even mortality. Just how important sleep is for health is something businesswoman and bestselling author Arianna Huffington admits to learning only after collapsing one day from the fatigue of having it all. In additional to her role as co-founder and editor-in-chief of The Huffington Post (and mother to two), she packed her schedule with events and opportunities to which she just couldn’t say no. Prioritizing sleep didn’t come quite as naturally, she told The Guardian: “At first, I found it very hard to give myself permission to sleep, as I was under the impression that the world might literally stop spinning if I was not awake.”

Lots of research and re-prioritizing later, and Huffington found her way from sacrificing sleep for success to getting a full eight hours almost every night and seeing her productivity soar. (She even takes the occasional power nap and has become an advocate of sleep pods at the office.) Her 12 secrets to a good night’s rest include no caffeine after 2 p.m., screen-free time starting at least 30 minutes before bed, stretching and mediation to help further wind down body and mind and, before tucking in, writing a list of things for which you are grateful to ensure your blessings get the closing credits of each day. 5. The Telomere Effect by Elizabeth Blackburn and Elissa Epel (2017)

Telomeres form a protective cap at the end of our chromosomes and thereby help promote healthy cell duplication, which, in turn, promotes healthy aging. Of course, we wouldn’t know this without the work of researcher Elizabeth Blackburn who, in 2009, was awarded the Nobel Prize in Physiology or Medicine for the discovery.

Blackburn  and psychologist Elissa Epel take us into the tiny world of telomeres and explain why their length — and strength — matter, and how small changes like the foods we eat, the type of exercise we do and how we de-stress can improve our health by improving theirs. 6. The Subtle Art of Not Giving a F*ck: A Counterintuitive Approach to Living a Good Life by Mark Manson (2016)

Don’t judge a book by its title. That’s the first lesson here. It’s less about figuratively flipping off everyone and everything and more about how to get at what’s truly important to you and letting go of anything superfluous.

For author and superstar blogger Mark Manson, that includes limiting distractions such as social media. Does the number of followers you have actually enrich your life and feed your soul? Maybe not. He also eschews the New-Age notion of positive thinking for a more lemonade-out-of-lemons approach, writing: “Fuck positivity. Let’s be honest; sometimes things are fucked up, and we have to live with it.”

While you may need earmuffs for the “passionate” language, Manson packs this book with practical advice to achieve true enlightenment, which, for him, is that life is as imperfect as we are and isn’t that f*cking perfect. Denmark regularly lands near to or takes top spot on the United Nations annual World Happiness Report. It would seem that Danes know a thing or two about sparking joy, and it has nothing to do with de-cluttering — Marie Kondo’s renown notwithstanding.

Hygge, pronounced HUE-gah, is the artful act of cocooning — a practice Canadians know a little something about. Prompted by its mass appeal in Britain, the folks at Collins Dictionary added hygge to the 2016 edition, defining it as: “the practice of creating cosy, congenial environments that promote emotional well-being.” Small gatherings of family or friends are preferred and, from there, it’s all about elevating the experience. Think homemade cocoa by candlelight or making them Mulled Wine Wednesdays. It’s said you know hygge when you feel it, and here’s the handbook to get it right.

RELATED: Is This Nordic Lifestyle Trend the Key to Your Happiness? 8. How Not to Die: Discover the Foods Scientifically Proven to Prevent and Reverse Disease by Dr. Michael Greger (2015)

With the what-not-to-eat diet craze hitting fever pitch, American physician and nutrition expert Dr. Micheal Greger cuts through the noise with an evidence-based pitch for going plant-based. He takes on the top 15 causes of premature death in America, offering interventions that favour flora over pharma. There’s hibiscus tea for high blood pressure, soy for prolonging breast cancer survival and coffee for reducing liver inflammation. Not battling a chronic condition? He has also scrubbed the science for the plants — 12 in total — we should all be eating every day to avoid disease entirely.

The book garnered accolades from the likes of His Holiness the Dalai Lama and Blue Zones author Dan Buettner and continues to top best-selling lists — as does Greger’s 2017 followup, The How Not to Die Cookbook. He’ll take your Meatless Mondays and raise you a longer, healthier life. In this memoir, Margaret Trudeau lays bare her battle with bipolar disorder, explaining in part the erratic behaviour she became known for as Canada’s youngest first lady. She sheds a bright light on her struggle and road to wellness. The candid account served to both challenge stigma around mental illness and open a dialogue for people to share their own story.

Trudeau doesn’t shy away from subjects of alcohol and drug use, divorce and suicidal depression brought on by the grief of losing her son Michel and ex-husband Pierre Trudeau. She also celebrates her triumphs, which include finding purpose and fulfilment in advocacy for issues close to her heart: access to clean water, women’s rights and mental health care. 10. Born to Run: A Hidden Tribe, Superathletes, and the Greatest Race the World Has Never Seen by Christopher McDougall (2009)

Writer-journalist Christopher McDougall’s search to salve sore feet takes him on a fascinating journey from Harvard biomechanics labs to a remote tribe of ultra runners that wear but a meagre strip of rubber between them and the unforgiving terrain of Mexico’s Copper Canyon.

But it isn’t all about the kicks — although, McDougall does explore the phenomena of barefoot running and indeed how less cushioning improves feedback from our feet to our brain for any and all mobility. The book is full of simple tips for better form (keep your back erect), diet (eat a ton of vegetables) and fitness (include strength training in your regimen) that can benefit everyone from devout runners to the casual-est jogger — and maybe even the running-adverse.