Q & A with Elementary’s Aidan Quinn 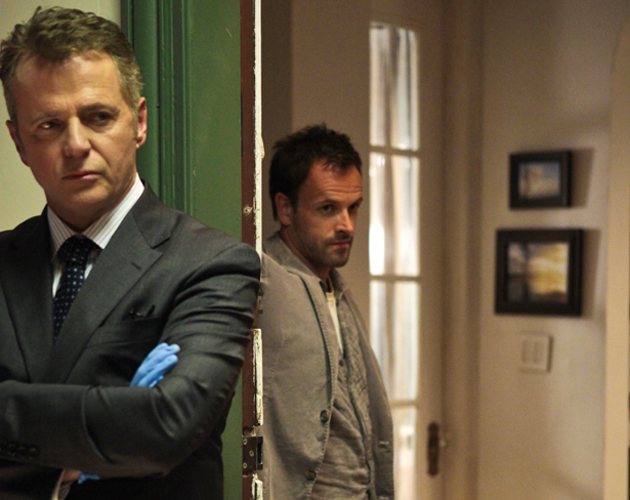 Sherlock Holmes leaves his digs at 221b Baker Street to take a trip across the pond in the new television show Elementary, where the iconic English sleuth is re-imagined as a consultant detective in 21st-century New York. He trades the familiar pipe and deerstalker hat for a cellphone and modern forensics, though Holmes’ trademark brilliance for observation remains. Aidan Quinn plays New York City police captain Tobias Gregson on the show. The 53-year-old recently spoke with Zoomer’s Mike Crisolago about working with some of Hollywood’s biggest stars, fatherhood and literature’s greatest gumshoe.

MIKE CRISOLAGO: Before you got into acting you worked as a roofer. Tell us about how you made that switch.

AIDAN QUINN: I had been living in Dublin after graduating from high school and I started seeing a lot of interesting lunchtime theatre where, for 50 pence, you could get a bowl of soup, a hunk of cheese, bread and a play … I started seeing these things and thinking, “I think I could do that.” That’s where it was born.

MC: And from there you’ve built a career working with names like Robert De Niro, Johnny Depp, Robert Duvall and so on.

AQ: It’s amazing. You know, it’s a privilege … I watched Johnny Depp take a bowler hat off his head and 30 feet away from him in an institution (as) a steel door was shutting and he would slide the bowler hat across the floor and would catch the door. Take one, perfect. Take two, perfect. Take three, perfect. And you just go, “That’s just too much fun.” Someone should make a documentary about what (Johnny) does for actors off camera because it’s so priceless. He’s just a clown.

AQ: There was a scene in Benny and Joon – he’s making a mess in the dining room pouring ketchup. I mean, there were takes where it would take the prop guys 10 minutes to clean up what he did off camera and the silliness he’d do off camera just to get reactions from me and Mary Stuart Masterson.

MC: From film to television, congratulations are in order: Elementary was just picked up for a full season. What’s it like working on a television show when you have that uncertain future hanging over you?

AQ: That was great news … We were very quietly confident but you never know until you get the call. It’s just a major relief. And also, it makes everything easier for the crew. And the writers know that they have a job so they can get to work on the next 10 scripts.

MC: Were you a fan of Sherlock Holmes before joining the cast of this show?

AQ: No more so than most. I’d watched it as a kid when it came on the telly – the old Basil Rathbone ones. But I’ve never read the series of the books. I’m starting to read them now, and they’re pretty damn good. The writing’s fantastic. I’m shocked at how good it is.

MC: What sort of feedback have you received from Sherlock Holmes fans?

AQ: I have got the weirdest texts from Holmes aficionados, and they love it. I have a couple of English friends who are real snobs about (Sherlock Holmes) and they said, “I thought I was going to hate this” and they’re into it. And it’s also the writing, obviously, and direction. The dynamic between Johnny (Lee Miller, aka Holmes) and Lucy (Liu, a.k.a. Dr. Watson) is just fascinating.

MC: Your character, the New York City police captain, isn’t the stereotypically depicted gritty cop. He actually has a soft spot for Sherlock.

AQ: Yeah, I think it’s important … (executive producer Rob Doherty) wanted my part to also be smart. Just Holmes is that much smarter. Most of the time – not always. I think we’re going to have some episodes where things might get turned on Holmes a little bit. So it keeps it interesting.

MC: Do you ever find yourself bringing the character of the New York City cop home with you?

AQ: I do find the role sometimes infecting my home life a little bit because I start barking a little bit at this one and that one, and I’m told in no uncertain terms, “Who are you talking to? That’s not the way you talk to me.” [Laughs] That’s right, I’m not Captain Gregson. I’m dad and husband.

MC: Since the writers are keen on following the actual Sherlock Holmes stories, is there a chance we’ll see the emergence of a Professor Moriarty character as Holmes’ chief nemesis?

AQ: I don’t know. That’s the thing. I literally have no idea of what they have in mind.

MC: Last question – when you were watching the theatre troupe in Dublin, did you ever imagine that one day you’d be sitting here with a television show and all this film and television work under your belt?

AQ: This is going to sound really strange but, (at) the age of 14 or 15, I was on my back, looking at clouds go by, and I knew I was going to be famous in the public’s eye somehow … Even to myself at that age I thought, “That’s weird. Where did that come from? Who do you think you are?” But I swear [I knew].