Oscar Nominations: All About the Boomers 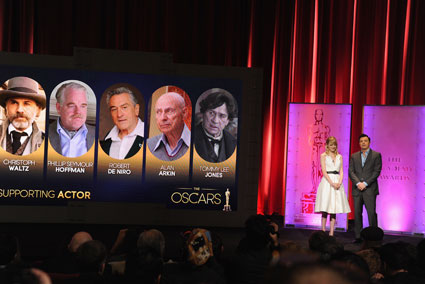 Boomers made out big when it comes to nominations in the six major award categories for the 85th Academy Awards, including a history-making nod in the best actress category.

It was a clean sweep for the over-45 age set in this category, led by 56-year-old Christoph Waltz, who put in a brilliant performance as a dentist-turned-bounty hunter in Quentin Tarantino’s pre-Civil War pic Django Unchained. Philip Seymour Hoffman, who squeaks in at 45, also received a nod for his disturbing portrayal of a Scientology-like cult leader in The Master. And then come the screen legends: Robert De Niro (69) landed his seventh Oscar nomination for Silver Linings Playbook, Tommy Lee Jones (66) and Alan Arkin (78) both nabbed their fourth nominations for their roles in Lincoln and Argo respectively.

In one of the least surprising announcements of the Oscar season, 66-year-old Sally Field nabbed her third Oscar nomination for her turn as Mary Todd Lincoln in Lincoln. So far, she’s won every Oscar she’s been nominated for. Just saying. Jacki Weaver, at 65, took home her second Oscar nomination for Silver Linings Playbook, while Helen Hunt, 49, did the same for The Sessions.

In the other least surprising announcement of the Oscar season, two-time Oscar winner Daniel Day-Lewis (55) took home his fifth nomination for his presidential performance in Lincoln, while another two-time winner, Denzel Washington (58), grabbed his sixth nomination for Flight.

Only one boomer nominee in this category, but she made history by earning it. Emmanuelle Riva, at 85, unseated Jessica Tandy as the oldest nominee for best actress in Oscar history for her role in Amour. Tandy also won the statuette when she was nominated at 80 for Driving Miss Daisy in 1989, meaning Riva could take the title of oldest winner from her as well. Not to jinx anything, but the 85th Academy Awards take place on Feb. 24; 85-year-old nominee Riva celebrates a birthday on, you guessed it, Feb. 24.

Of the nine best picture nominees, six were directed by boomers. Aside from those noted above (Steven Spielberg for Lincoln, Ang Lee for Life of Pi. David O. Russell for Silver Linings Playbook, and Michael Haneke for Amour), there’s the Quentin Tarantino (49) film Django Unchained and Kathryn Bigelow’s (61) tale of the hunt for Osama bin Laden, Zero Dark Thirty.

Beasts of the Southern Wild

Overall, Lincoln leads the pack with 12 Oscar nominations, while Life of Pi follows as a close second with 11. Canadian film War Witch received a nomination for Best Foreign Language Film, bringing the streak of Quebec films nominated in that category to three years straight.

Click here for a full list of all the 85th Academy Award nominees. The award ceremony takes place on Feb. 24, 2013.