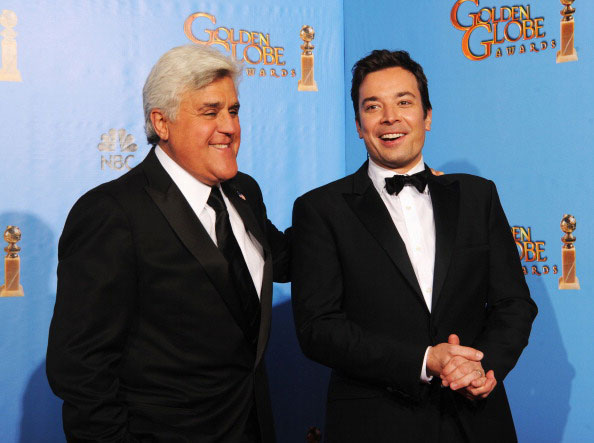 Stop us if you’ve heard this one before: Jay Leno is leaving the Tonight Show, handing the reins of the venerable franchise to the host of NBC’s Late Night. Déjà vu? Nope. Jimmy Fallon is pegged to take the helm of the Tonight Show by 2014, when Leno’s current contract runs out.

According to the New York Times, “… by turning to Mr. Fallon, NBC hopes to counter what it regards as its biggest late-night competitor of the future, Jimmy Kimmel, who in January moved his show on ABC from midnight to 11:35 p.m. Many TV executives speculated that NBC could not afford to wait too long to promote Fallon or it might risk having Kimmel, 45, lock up the young adult viewers who are the economic lifeblood of late-night television.”

That means the Late Night host could conceivably take over the Tonight Show before Leno’s contract officially expires.

The Times piece also notes the Tonight Show itself could relocate to New York, where Fallon and his house band, The Roots, are based and where a set is quietly being constructed. The show originally filmed in the Big Apple with hosts Steve Allen and Jack Parr, before late-night king Johnny Carson took the gig to the West Coast.

Leno of late has been ruffling NBC feathers via jokes about the network’s primetime ratings troubles during his monologues. During one recent broadcast, he quipped, “Scientists say they’re getting closer and closer to being able to do Jurassic Park-style cloning on extinct species. Things once thought to be extinct could now be brought back from the dead. So, there’s hope for NBC. It could turn around.”

Of course, before Fallon starts measuring his new studio space, he may want to recall the words of his Late Night predecessor, Conan O’Brien, who was unceremoniously toppled from the Tonight Show gig after only seven months as host: “I just want to say to the kids out there watching: you can do anything you want in life, unless Jay Leno wants to do it too.”

Austrian director Michael Haneke, who won an Oscar and Golden Globe this year for his film Amour, picked up a unique accolade this week: an award from the Austrian Society of Geriatric Medicine. The Society honoured Amour for “its portrayal of a couple trying to come to terms with sickness and old age” … Danny DeVito, 68, and Rhea Pearlman, 64, have kissed and made up. People magazine reports the couple, who separated last October after 31 years of marriage (and 42 years together), reconciled this week. In fact, they may even renew their wedding vows … David Bowie reached the top spot on the British album charts for the first time in two decades with his latest disc The Next Day. The album has also sold more than 90,000 copies, making it England’s fastest selling album of the year.  The 66-year-old Bowie surprised fans by releasing the first single on his birthday in January. The Next Day followed at the beginning of March, marking Bowie’s first album of new material in a decade … Yoko Ono took to Twitter on Wednesday, posting a photo of blood-stained glasses believed to belong to her late husband, John Lennon, accompanied by a message targeting gun violence in the U.S. The tweet read, “The death of a loved one is a hallowing experience. After 33 years our son Sean and I still miss him” followed by the photo, captioned, “Over 1,057,000 people have been killed by guns in the U.S.A. since John Lennon was shot and killed on December 8, 1980.” Wednesday would have been the couple’s 44th wedding anniversary … Evidently, some people are quite upset that, despite new scientific evidence available, the dinosaurs running amok in the upcoming Jurassic Park 4 will NOT be feathered. Sure, recent discoveries have shown that many of them should be, but Hollywood doesn’t let facts get in the way of a good story. Exhibit A: Argo.

Opening in theatres this weekend

Synopsis: Fey, a university admissions officer, meets a student who may be the son she gave up for adoption years earlier.

Synopsis: A Secret Service agent attempts to save the day after terrorists gain control of the White House and kidnap the U.S. president.