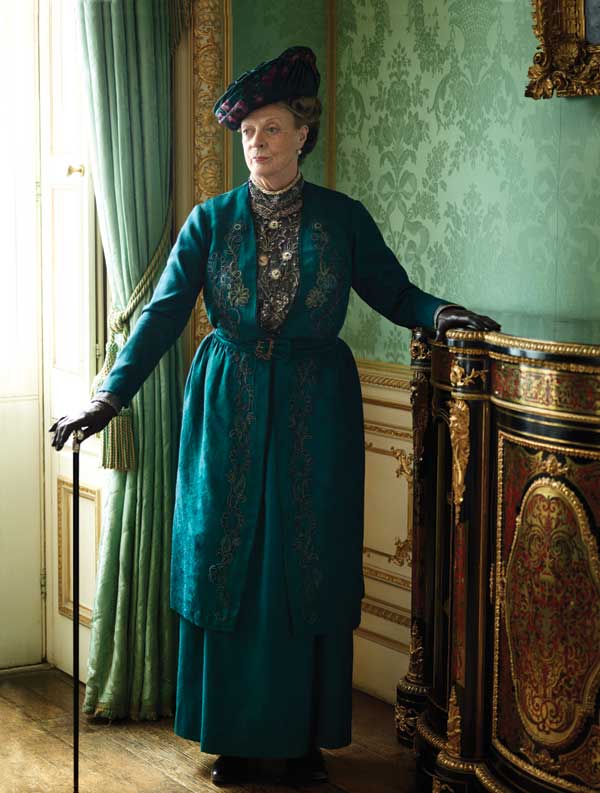 Fans of Downton Abbey won’t want to miss Season 3, which started airing on April 10 on VisionTV (a property of ZoomerMedia). Here, read the April 2013 cover story featuring Maggie Smith (and Shirley MacLaine on a dual cover) and the wonderful style of Downton Abbey.

No longer relegated to twee, kindly old ladies or ferocious unpleasant crones, women characters older than a certain age (and the actresses who play them) are back in the spotlight, thanks to Downton Abbey.

It was once easy to dismiss the elderly woman. She was the one you helped across the street or carried groceries for but when she spoke words of wisdom or told stories from back in the day, you had no patience to listen. Pop culture has been equally unkind, the elderly woman was often banished and derided as a crone, a harpy, an old biddy. Then, one fine day in 2010, along came Violet, Dowager Countess of Grantham, and suddenly we’re all ears. Her role in the worldwide phenomenon Downton Abbey, as Lord Grantham’s mother, the Crawley family matriarch and she of the witty one-liners has heralded the return of the battle-axe in all it feminine glory. By definition, a battle-axe is a fierce unpleasant older woman with strong opinions – think Lady Catherine de Bourgh in Pride and Prejudice. But Downton’s Dowager, as embodied by English acting legend, Dame Maggie Smith, is also regal, wise and able to see to the heart of the matter and call it like it is.

As the third season of the soap opera, set in Yorkshire’s stately mansion of the title, starts airing in Canada this month, it is Smith’s Violet, who is perhaps the breakout star, even more so than the sexy young things who scamper about castle and countryside in search of love and marriage.

The exemplary writing of show creator Julian Fellowes is due much credit for penning such famous zingers for her, such as “What is a weekend?” and “Don’t be defeatist, dear. It’s very middle class.” But a writer’s words need an instrument to make them soar, and Smith, 78, who has won seven BAFTA awards, two Oscars, two Golden Globes, three Emmys, two SAG awards, an Olivier award and a Tony, is the Stradivarius of actors.

Smith has never been short on scenes to steal, most recently her 10-year stint as Professor McGonagall in the Harry Potter films, The Best Exotic Marigold Hotel and Dustin Hoffman’s directorial debut, Quartet. She has a reputation for being aloof, even difficult, but according to those who have worked with her, she is as witty as the Dowager. Dustin Hoffman, during press for his film, spoke of her work ethic: “She has no tolerance for getting something half-right. She wants to get it completely right, and that’s all she’s concerned about. Nothing less will satisfy her.” To which she is said to have responded, “Well, otherwise, why do it?”

When I spoke to Elizabeth McGovern, who plays Cora, Lady Grantham, from her home in London, she confirmed as much, telling me how the cast has to be on its best behaviour and know their lines especially so when doing scenes with Smith. McGovern pressed home that Smith is also friendly and supportive of her cast mates but simply doesn’t suffer fools. Smith herself is unapologetic, having been quoted as saying, “It’s true I don’t tolerate fools but then they don’t tolerate me, so I am spiky. Maybe that’s why I’m quite good at playing spiky elderly ladies.”

“Quite good” is an understatement. The Dowager of Downton? Three words, Dame Maggie Smith. “Her way with a quip would make Dorothy Parker envious,” says Richard Crouse, Toronto film critic and author of Raising Hell: Ken Russell and the Unmaking of the Devils. “When Mrs. Crawley absorbs the shock of a putdown with the words, ‘I’ll take that as a compliment,’ Lady Grantham doesn’t let it go. Instead, she says, with perfect timing, ‘I must have said it wrong.’ Her acid tongue is shocking and joyful in equal measures.” Such juicy lines of the type you’d wish you’d say yourself, have spawned the
YouTube compilation, Shit The Dowager ‘ Countess Says, and a twitter account, @violetgrantham. And when told of the account in an interview, Smith responded much as her character would, “What is Twitter?”

Indeed, there is something to be said for being a woman of the Dowager’s vintage, able to trade likeability for power. And given that Smith’s character is an aged widow, she has neither parents nor husband to please and is therefore unfettered by such obligations. Sexually, she has little currency and knows it and is perfectly fine that that part of her life is behind her, and thus has no need for false modesty or lack of opinion. Though one gets the impression that if the Dowager wanted a flirtation, she would have it.

“I think the Dowager is one of viewers’ favorite characters. She clearly, as a character and as Maggie Smith, has reached a time in life to say what she wants with impunity,” explains Elizabeth Renzetti, a Globe and Mail columnist who lived in England for eight years and is an avid Downton fan. “A woman of a certain age can speak her mind and say whatever she wants without any fear of repercussions or caring how people will see her or think of her. We think younger people have the freedom, but age gives you the great freedom. That’s why people respond to her. She doesn’t censor herself as other people do at other times of their lives.”

And if one powerful matriarch wasn’t enough, in season 3, fans get to see the Dowager face off with an equally strong-willed woman, the maternal grandmother, Cora’s mother, Martha Levinson, played superbly by Hollywood legend and Oscar winner, Shirley MacLaine, 78. Whereas the Dowager clings to English tradition, MacLaine’s Martha has aged differently. “She’s the physical embodiment of America, red hair, makeup, sassy …she also drinks Scotch with the men, sings and dances,” notes Renzetti. “She doesn’t need to play the game anymore, as when you’re young and have to look for a husband. She’s complete in her own power and unapologetic. Sure, there must be some loneliness for both of them, but now they are matriarchs, they can give a straight answer, the unvarnished truth.”

And we tune in each week to get that truth. Indeed, it would seem that the older woman in pop culture is having a moment. And it’s a different moment from the giddy charm of recent popcorn pictures such as Meryl Streep in It’s Complicated or any Diane Keaton romantic comedy that seem to exist solely to prove that being over 50 can still be rollicking good fun in the sack. The roles of Smith and MacLaine on Downton, however, are more about power and strength and leadership. They recall the parts that Bette Davis and Katherine Hepburn inhabited in their golden years – eccentric, formidable and scrupulous – the kind of older woman you want to be when you’ve grown up – way up.

According to cast and crew interviews, Smith and MacLaine’s pairing was wonderful pairing to behold, in and out of character. “The only thing I can liken it to is DeNiro and Pacino in Heat,” said Rob James-Collier, who plays the nefarious valet, Thomas Barrow. The director Brian Percival said, “None of us knew what was going to happen … it was magical watching them.”

MacLaine, speaking on set as part of the “special features” of the DVD, said that between takes the younger cast were eager to learn details from her storied past. “They all wanted to hear about the Rat Pack and Frank and Dean and the three Jacks,” she teased. The three Jacks, of course, being Lemmon, Nicholson and Kennedy.

But between Smith and MacLaine, who have known each other for 40 years, it was also a meeting of the minds, and they had a hoot, referring to themselves as “two senior citizens, gossiping.” MacLaine told the Guardian of an incident on set with Smith, during a church wedding scene where the two stalwarts sat for seven hours chatting between takes. When asked the subject of such lengthy discourse, MacLaine responded, “Men. Health. Hair … One of her [Smith’s] friends … one very famous friend of hers, has found a new lover.” When pressed further on who and how old the friend in question is, MacLaine retorted, “A hundred and twenty. And we both wondered how this was possible … We talked about if we want a man in our lives again … put it this way: if a good-looking elderly man had walked in just then … we would have still stayed there talking.”

So, yes, the two got along like a house on fire. But lest you think that filming the series was all fun and games, Smith was quick to snap at a reporter who innocently suggested that she appeared to be having fun on the show. “You think that looks like fun? I don’t think it’s riotously funny to be wearing corsets and a wig from seven in the morning till seven at night – to tell you the truth, it’s agony!”

Mind you, the stage and screen star knows her share of personal agony. Smith has been married twice, with two grown sons, both actors, and was widowed in 1998. She is also a breast cancer survivor, once saying, “You don’t know how bad it is until you actually live through it yourself.” Though even when discussing cancer her English wit slips through, “There are advantages to cancer you know. My chemo cheered up the makeup department on Harry Potter because the wig went on a great deal easier without a single hair on my head.”

And she is not without sentiment, claiming she keeps on her mantel, a mug with two canvas oak leaves in it from a stage production during her four years in Stratford, Ont., from 1976 to 1980, where she performed in plays as varied as A Midsummer Night’s Dream and Macbeth. She received the Stratford Festival’s Legacy Award last September. But when it comes to aging, she is perhaps more ‘
pragmatic and returns to not suffering fools. When another interviewer tells Smith she looks great, her response, “Oh, please. Please. I did look greater.” But it is clear that aging is something she thinks about, the good and the bad. “I’m grateful that I’m still going, after a fashion. I don’t know whether it will go on indefinitely or whether I’ll slide gently into … whatever. It’s weird, you know, because you think its never going to go away. But it creeps up on you no matter how much you want to ignore it. And it does take a toll.”

Perhaps it does take a toll, yet, intentionally or not, Smith and MacLaine have proven that sometimes old is new again. And being older has brought its stars to new heights of fame, in part because of the medium itself. “People think of you differently if you’ve been in their homes [on the television]. They think they own you because they watched you while they were eating dinner,” explains Smith. “I got into a taxi the other day. The driver recognized me from Downton and asked me when the next season started. Before I could tell him, he said, ‘I always watch it when the football isn’t on,’ and that sure put me in my place.”

But despite taking second place to football in one fan’s eyes, Smith, thanks to the Dowager, can now take her place alongside other television icons. “Smith’s popularity proves you don’t have to be Betty White to earn the title of Legendary on television,” says Crouse. “She’s connected with viewers who admire her verve, her way with a line and her fearlessness.”

Season 3 started airing on April 10 on VisionTV (a property of ZoomerMedia).