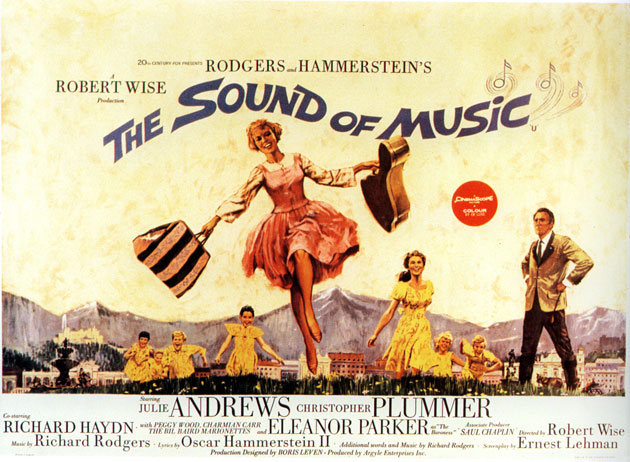 A month or so ago I was eating lunch with my Zoomer colleagues – a number of us sitting around a long table, filling the room with cheerful chatter about films we all enjoy watching around the holidays. For me, Alastair Sims’ A Christmas Carol is a must-watch on Christmas Eve. We went around the table and eventually someone mentioned The Sound of Music. A resounding cheer rose from the lunching crowd – everyone loves The Sound of Music! The lunchroom was alive with the sound of music!

Evidently, my end of the table was curiously quiet. One person looked at me and, as a smile slowly evaporated from her face, asked whether I like the film. My response: “I’ve never seen it.”

All conversation at the table came to an abrupt halt, and the room fell silent. I looked up from my pre-made, grocery store brand Muskoka chicken salad to see the entire group staring back at me, mouths agape, eyes wide with disbelief.

“No,” I replied cautiously. I wasn’t really sure why I’d never watched it. I just hadn’t. Not when I was a child, not when I was sixteen going on seventeen, never. My eyes darted back and forth around the room, unsure of what would happen next.

Suddenly, one colleague flipped the table over in outrage (okay, maybe they just leaned back in their chair. Still, it felt dramatic).

“How can you review movies if you’ve never seen The Sound of Music?” one asked.

Before I could muster a response I was met with a barrage of questions about the von Trapp family, Julie Andrews, Christopher Plummer, and song titles. My answer to most of them was to stare back, blankly. In my head, I reasoned that I could quell the uprising by mentioning how I know of the scene where Julie Andrews is spinning around singing about how the hills are alive. I reasoned wrong…

And that’s what brings us here today. Virtually everyone at Zoomer magazine now knows I haven’t seen The Sound of Music. I wear it like a bell around my neck that rings wherever I go, and I am determined to make this right. So recently I went with a colleague to rent the film (yes rent – there are still movie rental places out there). As I write this I am preparing to take my spot on the couch to finally, for the sake of my own self-respect and film-reviewing credibility, watch The Sound of Music. Here we go…

I watched The Sound of Music last night. My first impression: I cannot believe how many songs I knew from the film without ever seeing it. The score truly precedes the production. It’s the last collaboration between Rodgers and Hammerstein, and it also marks the peak of their songwriting talents.

“The Sound of Music,” “Do-Re-Mi,” “My Favourite Things,” “The Lonely Goatherd,” ”Sixteen Going on Seventeen,” Climb Ev’ry Mountain,” “So Long, Farewell”: so many of these songs have worked their way into popular culture and have endured for nearly half a century. Will we ever see that again with a musical on this scale with this many iconic numbers?

The second thing that hit me is that I’m glad the film was made in the 1960s. If it were first made into a feature film today, it would run the risk of becoming some big-budget, Baz Luhrmann-esque fantastical romp.

By contrast, there’s a real humility to the making of this movie. The music speaks…er…sings for itself. The most elaborate special effect is the fact that it was shot in colour. It doesn’t need CGI, or 3D, or any other gimmick to enhance it. The acting, the songs, the dancing – they all stand on their own merits. For example, when Maria and the children are singing while riding their bicycles, and they’re choreographed to speed forward and fall back with the music, it’s simple but clever and more natural than any elaborate chorus line of dancing kids could be.

Christopher Plummer was chosen for the role of Captain von Trapp, in part, because of his theatrical credentials, and he’s perfect despite originally detesting the role. Today you might get a Zac Efron for the part – a good-looking guy who can sing. If you were lucky you’d get Hugh Jackman. Julie Andrews is, well, Julie Andrews. There’s no replacing her. Yes, tonight NBC airs a live-action version of The Sound of Music starring Carrie Underwood, but it’s a revival of the stage musical, not the film. Still, Andrews is the person most associated with Maria, despite the fact she did not originate the role (that honour goes to stage actress Mary Martin, who brought Maria to life on Broadway in 1959). And who knows – if the film were made today they might even cast a Kardashian as a nun for the shock factor. Isn’t it about time in the reality-TV fame lifecycle that one of them tries to mount a singing career?

I do have to say that the film is longer than I expected, but the second act, with the marriage and the Nazi threat/von Trapp escape, ensures the plot never slows. And the nuns tinkering with the Nazi cars at the end? Love it.

I have to say that the only part of the film I wasn’t a huge fan of – and I apologize if this is sacrilege in Sound of Music circles – were the von Trapp kids. Aside from some of them not looking their age – Charmian Carr, who played the “sixteen going on seventeen” Liesl, was in her 20s when the film was made – I didn’t find them particularly endearing. But, that’s just me. Maria von Trapp loved them and that’s all that really matters.

Overall, I can see why people love The Sound of Music so much, and I admit that I really, truly enjoyed it myself. As I write this I have a number of the songs stuck in my head, and I suspect they’ll be there for a while.

And my advice to those who haven’t seen The Sound of Music? Calmly and quietly sneak away from wherever you’re reading this and find a copy of it to watch. Take my word for it – it’s a great film. Having finally seen it, I personally look forward to returning to work and joining in any future lunchroom Sound of Music discussions. Now I just hope no one finds out I’ve never seen A Christmas Story…