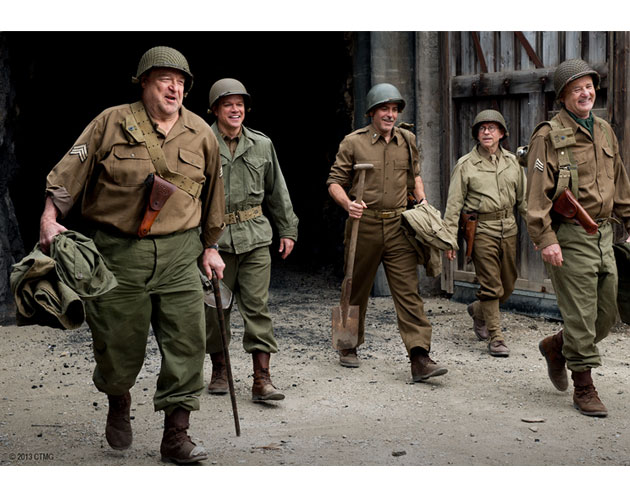 Choice Quote: “If you destroy an entire generation of people’s culture, it’s as if they never existed.”

The Hype: Based on the book The Monuments Men: Allied Heroes, Nazi Thieves, and the Greatest Treasure Hunt in History by Robert M. Edsel and Brett Witter, the story unfolds during the tail-end of World War II. Hitler’s troops have been ordered to confiscate as many pieces of priceless art as possible in an attempt to build a massive museum in his hometown of Linz, Austria. But, with the Third Reich withering, Hitler issues a Nero Decree–if Germany falls, or he should die, the troops are to destroy everything they’ve stolen.

On the other side of the pond, Sgt. Frank Stokes, portrayed by George Clooney, is rounding up a group of museum directors, curators, and art historians to carry out the daunting task of hunting down said artifacts and returning them to their rightful owners.

The Reality: As in Ocean’s 11, Monuments employs an all-star ensemble cast of characters set on a caper–this time a treasure hunt–under the leadership of a valiant Clooney. The unlikely team of intellectuals include John Goodman as Sgt. Walter Garfield, The Artist’s Jean Dujardin as Lt. Jean Claude Clermont, and Downton Abbey’s Hugh Bonneville as Major Donald Jefferies. For comedic relief, the head-butting duo of Bill Murray as Sgt. Richard Campbell and Bob Balaban as Pvt. Preston Savitz are thrown into the mix.

And then there’s Cate Blanchett (in fine form as per usual) as Clare Simone–a resistance fighter who works at the Jeu de Paume where she has painstakingly made note of every Impressionist masterpiece the Nazi’s have taken.

On the surface, it seems absurd that art historians would have the military smarts to go on a mission alongside troops, but in wartime when boys quickly become men, these men quickly become soldiers. The fish-out-of-water brood do their best to deal with their new reality (including death, loneliness, and the agony of defeat), and over time become hell bent on following out their orders—even if it means losing their life to do so.

It would be remiss of me not to mention the outstanding work done by cinematographer Phedon Papamichael (who collaborated with Clooney on 2011’s The Ides of March). It’s easy to get lost in the visual ironies of once beautiful allied towns ravaged and battered by combat, and slow gliding pans of museums and monasteries dripping with history.

But, despite the talented cast and interesting storyline (the topic was visited only once before on film) there is something missing from Clooney’s latest efforts. It’s an even-keeled movie (neither too suspenseful, nor too timid), but at times it falls completely flat and we’re left wanting a payoff that never really comes. It’s hard to get attached to any of the characters and the situations they find themselves in. And Clooney’s moving and poetic voiceovers often explain the metaphors we’re seeing on screen, but we’re left wondering why the scenes themselves couldn’t convey this alone.

The verdict: For all its shortcomings, it’s still a fascinating chapter in history that few are familiar with and would appeal to both history buffs and art lovers alike.

Theatres or rent it?: The cinematography work is best seen on the big screen (but, if that’s not important to you, go ahead and rent it).

Can the grandkids watch?: Yes, they can if they’re of a certain age (13+). It’s a great history lesson and teachers should especially take note–there’s a robust educational component online that even includes lesson plans.