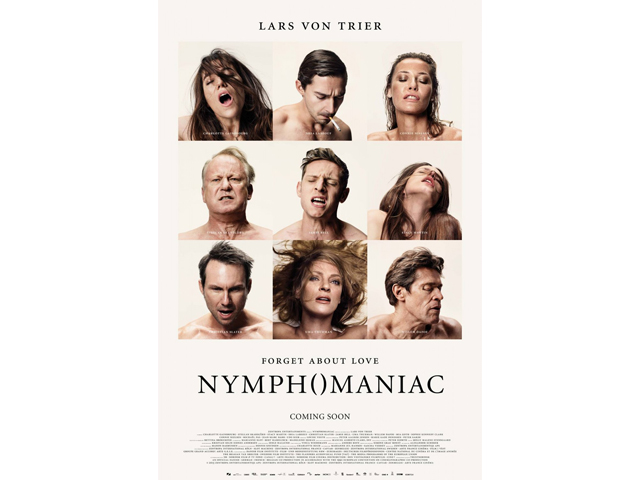 Choice Quote: “All I wanted to say is, if you’ve got wings, why not fly?”

The Reality: This is what you call “tantric cinema” – four hours of unadulterated, unsimulated sex. Of course, much like last year’s similarly explicit Blue Is the Warmest Color, and many of von Trier’s past offerings, these films are about more than just the sex.

Yes, there’s a plot in there too, one that revolves around 50-year-old Joe (Gainsbourg) who begins the film beaten and left for dead in an alley. A middle-aged man called Seligman (Skarsgård) finds her and brings her to his flat. Once there, she tells him of her life as a nymphomaniac, with Seligman cutting in every once in a while with a metaphor about fly fishing or a quote from some medieval literary text.

The first volume starts with Joe’s childhood, introducing her beloved dad, a doctor (Slater), her mom, “a cold bitch,” and the discovery of her sexuality. From the time she loses her virginity to Jerome (LaBeouf) at age 15, and through her 20s, Martin fills the role of Joe in the story. At this point Joe’s sexual thirst is unquenchable, a virtual carnival of train sex, “fuck me clothes,” and random partners whose egos she comically massages by telling them each they’re the first to give her an orgasm. There’s lots of naked body parts thrusting, bumping, poking and caressing, the unsimulated parts performed by porn stars. For her part, Joe isn’t necessarily happy, and the film’s main focus isn’t simply all of the sex but the idea it represents: Joe’s search for a sort of fulfillment of which even she really doesn’t truly understand yet.

Perhaps the best scene in the film, however, comes when one of the Joe’s men, Mr. H (Hugo Speer) foolishly mistakes their lust for love and leaves Mrs. H (Thurman). He surprises a none-too-impressed Joe at her apartment with the news, unaware that Mrs. H has followed him with their three young boys in tow. She forces her way into the apartment and instigates, without doubt, the most awkward tea party you’ve ever seen (made worse when Joe’s dinner date shows up). “Would it be alright if I showed the children the whoring bed?” Mrs. H asks Joe, simultaneously providing one of the film’s funniest moments while also re-writing the manual for all jilted lovers to follow.

Volume One – an exploration of youthful awakenings and exploration (lust, love, loss) – ends on something of a cliffhanger. Volume Two, however, takes a different turn.

The second installment sees Gainsbourg take over the role in both narration and the flashbacks. She and Jerome have a little boy, Marcel, but it turns out being a mom isn’t enough of a thrill to keep Joe content. This is where her addiction takes a destructive turn, as she arranges anonymous sex with a “dangerous man” on the street, and regularly sneaks off to an S&M practitioner regularly, leaving her baby sleeping at home, alone, while Jerome is away on business. From here, though, the plot falls off a bit, with Joe entering into both an unusual new profession, and a sexual relationship with a lover/protégé, which ultimately leads to a murderous revenge scheme.

It’s all a bit convoluted, and the ending left a very bad taste in my mouth (I’m not the only one – many of those in attendance at the press screening also groaned in disapproval). Seligman, however, does make an interesting point when he notes that, if Joe were a man, her story would be much less shocking. Of course, this also touches on the debate about whether von Trier’s films exploit women or, as Uma Thurman contends, reveals a double-standard against them.

Speaking of Martin, she does a fine job with her breakthrough role while Gainsbourg does her best against a script that starts to wander just as she gets more screen time. It’s Slater, as Joe’s beloved father, and his scenes with Martin, as well as Thurman, who made the film(s) for me though. Skarsgård, too, does a fine job until…well…you’ll see.

Four hours of watching raunchy romps does get a little tiring, so if you plan to see both films I recommend taking a break in between. When you see them back to back, by the fourth hour you’re ready to head back into the world of the clothed.

Theatres or rent it?: If you plan on seeing both, and have the time to dedicate to them, head to the theatre. It may, however, be easier to get them on demand and watch them when you have four hours to spare.

Can the grandkids watch?: Seriously?

Nymphomaniac, Volumes 1 and 2, open in theatres in Toronto, Montreal, and Vancouver, and on Video On Demand everywhere, on March 21. Wider theatrical release to follow. * NOTE: Separate ticketing is in effect for Volumes 1 and 2 in theatres.